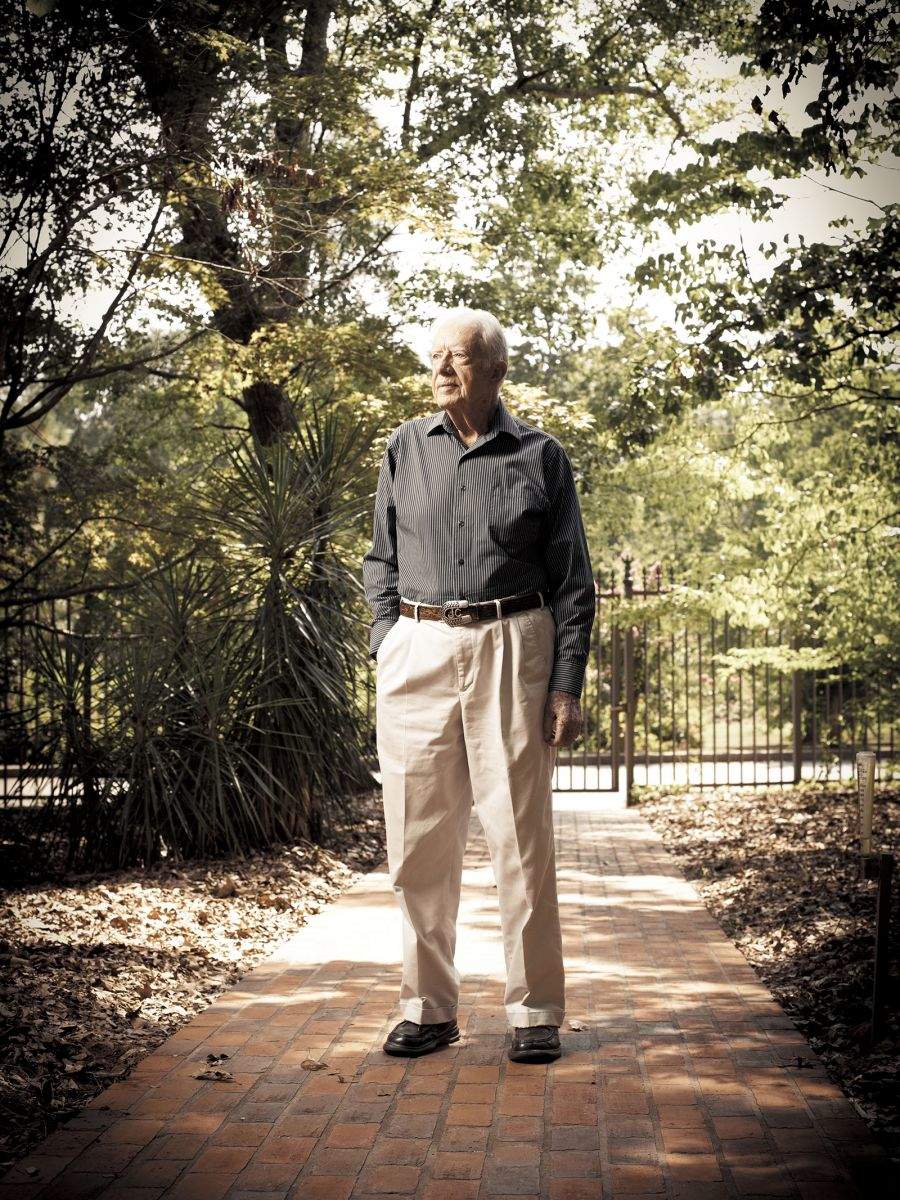 James the evangelist: Jimmy Carter at home in Plains, Georgia

Jimmy Carter – Nobel peace laureate 2002, treaty-maker, international development expert, destroyer of diseases and bestselling author – has set his mind on transforming women’s rights. I meet the former president in the ninth-floor presidential suite at the Mandarin Oriental in Washington, DC. Appositely, the location is slightly away from the usual bustle of political hot spots – Capitol Hill, K Street or the historic downtown hotels such as the Mayflower or Hay-Adams. As he greets me, his slender, 89-year-old frame springing up from the sofa where he was resting, you cannot help but marvel at his energy and drive.

Carter’s latest book, A Call to Action: Women, Religion, Violence and Power (Simon & Schuster, £18.99), is brimming with missionary zeal and a sense of historical purpose of a kind that we Brits often regard with some cynicism. It begins by recalling the experience of segregation in the Deep South, an injustice that seems to have shaped his world-view more than anything else. It evokes the spirit of Martin Luther King and even the precedent of the 19th-century abolition of the slave trade. In Carter’s mind, each battle he has fought is more important than the last.

Aside from his time at the White House from 1977 to 1981, Carter has been a Baptist Sunday school teacher for more than 60 years, following in the footsteps of his father. Jesus, he writes in A Call to Action, never denigrated women in the way that Christian societies have done since. True Islam, too, has been perverted by arcane cultural practices in the Middle East and Africa, such as female genital mutilation, which have no grounding in the Quran. Carter tells me about the letter he recently wrote to Pope Francis concerning the role of women in the Catholic Church, and recounts the story of his own split from the Southern Baptist Convention in the early 2000s over its refusal to ordain female ministers.

As we talk, I notice much of his ire is turned inwards on the United States, where, he argues, damaging levels of sexism are prevalent throughout society – in politics, professional life, the military and even on university campuses. Not just discrimination, but widespread sexual aggression and abuse, go unnoticed or are accepted tacitly.

Would the election of a female president make a difference?

“I don’t know,” he says, without mentioning the Democratic front-runner, Hill­ary Clinton, to whom he has offered only lukewarm support in the past. In the west, successful female politicians are reluctant to grapple with women’s issues, he explains, for fear that they might upset a system geared towards male dominance.

By contrast, in post-revolutionary states such as Maoist China or Sandinista Nicaragua, women were given more opportunity to excel in political life. The United States ranks 60th in the world, he notes, for female participation in politics.

What did he think of Margaret Thatcher? “I admired her as a respectful, powerful and forceful woman, although she was much more conservative on social issues [than I was],” he says. After a pause, he jokingly adds: “She also knew more about my country than I did.”

Carter’s greatest impact has been in the developing world. Among the many achievements of his Carter Centre, founded in 1982, one stands out above all. This has been the almost complete eradication of guinea-worm disease, which once affected four million people in Africa. For this reason, he is widely regarded as one of the most successful former presidents. This accolade sounds flattering but isn’t always intended to be. Carter has grumbled that the present incumbent of the White House does not bother to consult him.

In person, Carter is charming, warm and impossible not to like. In Britain we would call him a “national treasure” – a sort of Tony Benn figure, with whom you don’t have to agree in order to respect his integrity. But as one of only three one-term presidents since 1945, Carter exudes the sense of having unfinished business to attend to. He has written 28 books, most of them in a similar evangelical, campaigning vein.

What drew him to the issue of women’s rights, and why now?

He and his wife, Rosalynn (they have been married for nearly 70 years), have visited 145 countries as part of the work of the Carter Centre, which has active projects in half of them. Most of the centre’s programmes, from disease prevention to birth control, are channelled through the women in the communities where it works – teachers, nurses, mothers and wives. It is through working with these women that Carter began to understand the scale of the problems: the selective abortion of female foetuses; mass infanticide of newborn girls (“gendercide” is the expression that Carter uses); female genital mutilation; sexual violence and trafficking. He believes that the slave trade of women is bigger now than it was in the 19th century.

Is Carter aware of the recent work by William Hague and the British Foreign Office, together with Angelina Jolie, in campaigning against sexual violence in conflict zones? “Absolutely,” he says, and both he and his aide nod vigorously when I mention the forthcoming summit on the subject in London in June. Hague, Carter says in his Georgian drawl, “is an active hero of mine; he and Miss Jolie are doing a successful and admirable job”.

Is this the type of “soft-power” diplomacy and “moral leadership” that can help Britain carve out a new international niche for itself? The idea appeals to Carter, not least because it is the type of thing that the Carter Centre does.

Though he is unwilling to be drawn into a discussion of Tony Blair and his foreign policy, Carter has condemned the former Labour prime minister for having been too close to George W Bush, whom he holds responsible for excessive “militarism” in US foreign policy. “It’s a shameful and pitiful state of affairs,” he said in 2006, “and I hold your British prime minister to be substantially responsible for being so compliant and subservient.”

Carter’s eyes brighten when we turn to contemporary affairs and his tongue grows sharper. He expresses disappointment that the lofty language of Barack Obama’s 2009 Cairo speech has not been matched by action. Carter has denounced the expansion of drone warfare, the activities of the National Security Agency and the failure to close Guantanamo Bay. He smiles gently but doesn’t bite on the bait when I suggest that it might have been premature to award the Nobel Peace Prize to Obama in 2009.

While high unemployment and inflation played a part, it was Carter’s perceived inadequacies in foreign affairs that led to his defeat by Ronald Reagan in 1980 after one term in office. A quick succession of events in 1978-79, including the Iranian Islamic Revolution and hostage crisis and the Soviet invasion of Afghanistan, created the impression that his was a presidency at the mercy of events.

Many in Washington have compared Russia’s annexation of Crimea to the Soviet invasion of Afghanistan in 1979 but Carter is not convinced. Crimea is a “special case”, he says, because of its history and influence on the Russian psyche. Nonetheless, he firmly believes that Russian expansionism should stop there, and that the United States and its allies should present a united front to prevent further infringements of Ukrainian sovereignty by Moscow.

At this point, Carter begins to recite the various aspects of his own response to the Soviets in order to illustrate his toughness. These included withdrawing American athletes from the 1980 Moscow Olympics, a trade embargo and the arming of the Afghan mujahedin. He explicitly reminds me of the way in which the CIA did this with Russian-made weapons from other states, in order to disguise the US role. You can almost hear the voice of Carter’s national security adviser, Zbigniew Brzezinski, who wanted “to make the Soviets bleed for as much and as long as is possible”. Given the subsequent history of Afghanistan, and the origins of al-Qaeda, I wonder, does he have any regrets? “No, no regrets at all.”

Suddenly, discussing his own record in office, this archetypal dove sounds defiantly hawkish. One wonders what type of Jimmy Carter the world would have known today had he won a second term. The differences between the “realpolitik” of the Nixon-Kissinger years and the short-lived policy of the Carter-Brzezinski era can be overstated.

When Carter held the reins himself, his humanitarianism often took a back seat. In December 1977, at a dinner during a state visit to Tehran, he declared: “Iran, because of the great leadership of the shah, is an island of stability in one of the more troubled areas of the world.” Incredibly, he congratulated Mohammad Reza Shah for “the respect and the admiration and love which your people give to you”.

As the regime began to crumble over the course of the following year, Brzezinski reassured the shah that the United States would back him “to the hilt”, though this was something on which, ultimately, Carter was not prepared to follow through.

The evening before our meeting, Iran nominated Hamid Aboutalebi, who was allegedly among the hostage-takers in the 1979 storming of the US embassy in Tehran, as its new ambassador to the United Nations. The move was widely interpreted as a snub to the Americans. Given the damage that the hostage crisis did to the Carter presidency, I ask if he has any thoughts about the appointment. He has just heard the news but swiftly reverts to the philosophical, conciliatory Carter we know best. “No objections at all,” he says. “Iran is a sovereign state and many of the hostage-takers were college kids at the time.”

On Syria, he is a little more forthcoming. Intriguingly, he describes how he has met Bashar al-Assad “six or seven times”, including when Assad was a university student in London.

What was his impression of him?

He pauses. Assad is a “proud person” and one of the “most obdurate individuals I have ever met”. This is one of the reasons why Carter thinks it was a mistake for the US to demand that the Syrian leader resign as the civil war in his country began. To Carter, to set this condition was unrealistic, because it underestimated the strength and depth of Assad’s support and misunderstood the whole logic of the regime. But was Carter’s alternative faith in the Kofi Annan peace plan – allowing Assad to stay on but with elections and UN human rights monitors – any more realistic?

In retrospect, Carter, for all his perceived failures, did score some successes abroad, such as the Camp David Accords of 1978, which secured peace between Egypt and Israel, and in bringing the question of human rights to the forefront of the cold war. However, his record at home has been criticised by some social democrats in the US who believed he abandoned the “affirmative government” of the Roosevelt-Truman-Kennedy tradition in favour of a type of small-government liberalism.

The recently published letters of Arthur Schlesinger, the distinguished historian who worked as a speechwriter for JFK, contain a message to Carter’s special assistant Ray Jenkins in 1982, in which Schlesinger complains: “Human rights and Camp David apart, the Carter years were wasted years.”

Carter cannot be accused of wasting any time since then.

John Bew is a historian and New Statesman contributing writer