There’s good and bad news for Ed Miliband in the latest Ipsos MORI political monitor. The good news is that his approval with his performance as Labour leader has surged since the conference season, with his net satisfaction rating rising by 23 points to -12, one point above Cameron’s. That will reassure those Labour MPs who have long feared that Miliband’s poor ratings could deny the party victory in 2015, although the test will be whether this bounce is sustained. 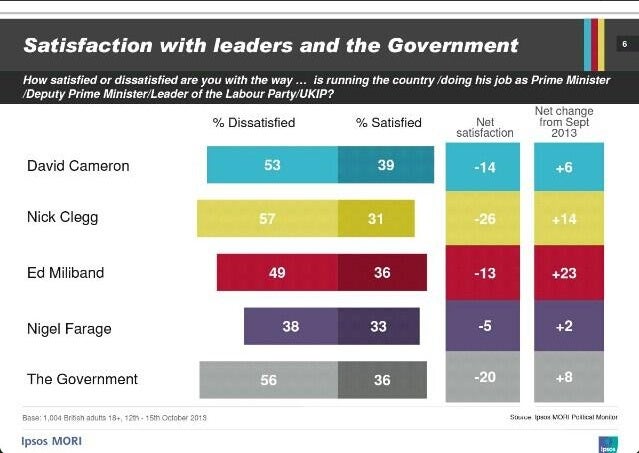 But the bad news is that the party’s poll lead has evaporated as voters give the Tories credit for the economic recovery (even if few are feeling the benefits). Support for Labour has fallen by two points to 35%, with the party now tied with the Conservatives for the first time since January 2012. While it’s always impossible to say for certain why voters behave in the way they do, it is notable that the narrowing of Labour’s poll lead (shown in all surveys) has coincided with a surge in economic optimism. MORI’s poll shows that 42% believe that the economy will improve in the next 12 months, compared to 27% who believe it will get worse.

There is some consolation for Miliband in the finding that his proposed energy price freeze is the most popular of all the policies announced during the conference season. But with growth likely to accelerate significantly next year, the fear in Labour will be that the Tories will continue to benefit.