Inspired by the Tory EU rebels, the pugnacious Labour MP John Mann has submitted his own amendment to the Queen’s Speech. The amendment is identical in wording to the Tories’ but substitutes the words “EU referendum” for “a referendum on reversing NHS privatisation” (you can see both below). 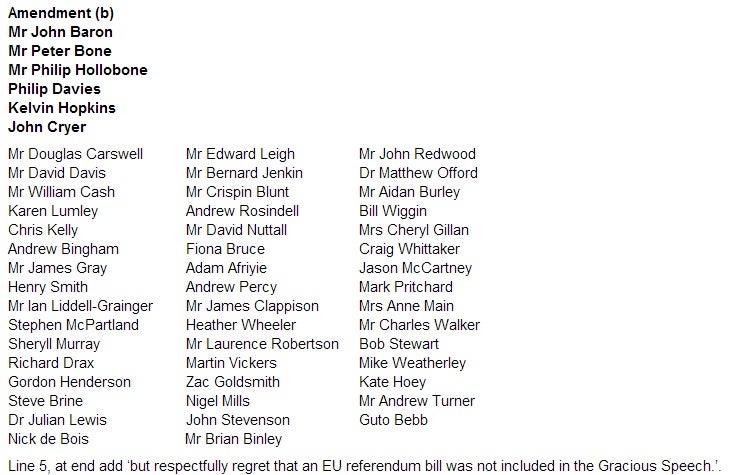 A rather lengthier amendment has been submitted by Green MP Caroline Lucas, requesting that the government “recognise that its programme fails to address either the worsening climate crisis or that austerity is failing; call on your Government to heed warnings that urgent and radical cuts in emissions are needed to prevent global temperature rises of 4℃ or more by the end of the century; urge your Government to recognise that, to fulfil its own commitment to keep warming below 2 degrees, around 80 per cent of known fossil fuel reserves must stay in the ground; further call on your Government to end austerity and instead reduce the deficit through an economic programme that prioritises investment in jobs, especially in labour-intensive green sectors and that pursues a goal of 100 per cent renewable energy by 2050, with policies for rapid deployment of renewable energy and energy efficiency technologies; and further call on your Government to lift the council borrowing cap to promote council house building, to tackle the cost of public transport starting with bringing the railways back into public ownership, to end cuts to welfare and take other steps to build a resilient and stable economy.“

If the EU referendum amendment, which has been signed by 53 MPs, is selected for debate by the Speaker, a vote will be held on Wednesday evening.