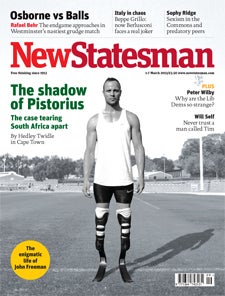 You are invited to read this free preview of the new issue of the New Statesman, on sale tomorrow. To purchase the full magazine – with our signature mix of opinion, longreads and arts coverage, plus a special report from Cape Town about the Oscar Pistorius case, David Blanchflower’s economics column on underemployment, a profile of enigmatic former New Statesman editor John Freeman, and Steven Poole’s essay on authenticity – please visit our subscription page.

Working weekends can either be intermin­ably quiet or ridiculously busy. When the ratings agency Moody’s announced that the UK economy had been downgraded from triple-A status, I knew it would be the latter. Moments later, I was swept inside No 11 to interview George Osborne for Sky News. Making announcements late on a Friday night might suit the markets but it does nothing for the social life of journalists.

Then, any thoughts of a quieter Sunday were quickly dashed when the papers were full of stories about the Lib Dem peer Chris Rennard. He is facing allegations of sexual harassment, which he strongly denies. Once again, I found myself being whisked into a room to interview the key player. This time, it was Nick Clegg, who angrily denied knowing about “these allegations” but admitted that he had been made aware of “indirect and non-specific concerns”. What exactly is the difference? Somehow a story about serious allegations had turned into an argument about semantics.

Writing of the allegations against Lord Rennard, I can’t help but feel that the Lib Dems would benefit from having a few more women on the airwaves.

They are hampered by having a meagre seven female MPs – and it’s not just the Lib Dems with that problem. Images of fusty gentlemen drinking whisky in smoky corridors are wide of the mark but, in some aspects, Westminster can still feel like an old boys’ club.

One high-profile female Labour frontben­cher told me that when she went to pick up a “spouse pass” for her other half, the parliamentary official simpered: “You must be so proud of your husband.”

This attitude can also sadly be found further up the Westminster food chain. I know of a current member of the cabinet who told a colleague that he didn’t believe working mums could successfully juggle top jobs in government with having a family. “They just can’t do it,” he said, implying that they were struggling to keep up with their male counterparts at work.

Not that a political journalist can throw stones – the number of women in the lobby is an embarrassment. I remember being introduced to an MP by a male colleague when I had recently joined the lobby as a newspaper hack. “Nice to meet you,” he said, sticking out his hand. “Do you work for the fashion pages?”

I was dressed in a suit and was walking through Portcullis House with a lobby pass. Most people would have thought these were pretty good hints as to my job description.

The Rennard allegations are a row that the party could do without before the Eastleigh by-election, which pitted the two sides of the coalition against each other for the first time.

I’m at a slight disadvantage because by the time this appears in the magazine, the result will be old news. What I can say for sure is that this was the Lib Dems’ contest to lose. They have an impressive local base, with 40 of the 44 councillors who represent wards in the constituency. The party’s well-oiled by-election machine – masterminded by none other than Lord Rennard – was in overdrive at the time of writing.

The Conservatives were also desperate to win because it’s a test of David Cameron’s election strategy. The consensus is that if he is to win a majority in 2015, he needs to take about 20 seats off his coalition partners/ri­vals. If he can’t do it in seats such as Eastleigh, his party will become more agitated about its prospects in two years’ time.

A steady stream of Conservative MPs have jumped on the train from Waterloo or driven up the M3 to the old railway town – all determined to stick it to the Lib Dems.

It hasn’t always been smooth sailing, however. I was out campaigning with Eric Pickles when a man holding a young child opened the door. “How old is your daughter?” the secretary of state asked cheerfully. “He’s a boy,” was the rather less happy reply.

The best thing about the Eastleigh by-election, however, has been the Conservative MP Michael Fabricant’s tweets.

This is one politician who was truly wasted in the government – ever since he left the whips’ office, his quirky sense of humour has been unleashed. “Just spotted Vince Cable in #Eastleigh looking like a war criminal with hat pulled over face #indisguise Lol,” he wrote, followed swiftly by: “My last tweet was distinctly not very #Coalicious!!”

He has also been tweeting the various notices pinned on people’s doors that show just how enamoured residents are of the political attention.

One read: “All political parties campaigning for the Eastleigh by-election, please do not knock on my door, please just **** off!” Another threatened to shoot campaigning politicians on sight. Who would want to live in a marginal constituency?

I was hoping to be able to drop some impressive-sounding cultural exhibition into this diary – but, alas, it hasn’t happened.

This is largely because I’ve recently bought a house and most of my days off are spent liaising with plumbers or making mad dashes to Ikea.

I’m now an expert in all manner of brain-numbingly boring things and have learned a lexicon that I didn’t realise existed until now: caulking, rising damp, olives that are parts of radiators rather than something you eat. At a party this weekend, rather than discussing the latest trendy gigs or hot gossip, I found myself in a heated debate with a friend about the merits of feature walls.

Taking a step back, I couldn’t help thinking: I’ve spent my Friday night with George Osborne and my Saturday night discussing DIY – who said TV was glamorous?

Sophy Ridge is political correspondent for Sky News. She tweets as @SophyRidgeSky