“Most of the time I try to remind myself: ‘I am a human being. My existence is worthwhile.’ But sometimes it’s just impossible to keep telling yourself that.”

Lisa Egan is in the middle of re-applying for her employment-related disability benefit. The 33-year-old’s mobility impairment and chronic health problems meanthat – as much as she would like to – she’s unable to work, and is reliant on the benefit. If her application is turned down, she tells me, she won’t have enough money for food, heating, or her non-prescription medications.

When I spoke to her in late December, she was worrying she wouldn’t complete her paperwork in time for her face-to-face assessment in January. “As it is, my form is currently three weeks late. I’ve got so much to gather and so much to write about,” she says. “I’m almost there, but I’m not going to get it done in time to post it to them. I’ll have to hand it to them on the day.” She’s been given four weeks over the Christmas period to fill in an extensive form and collect all of her medical evidence. But, given how unwell she often feels due to her condition, it simply isn’t enough.

“The fear of ‘I can’t get this done in time, they’re going to stop my money’ is pretty rough,” says Egan. “My depression has definitely been made worse by the whole experience. Sitting there with the form in your hand to beg for ‘taxpayers’ money’ to fund your burdensome existence makes it really hard to find any reason to not just give up.”

The reason Egan cannot give up – as anyone receiving benefits will know – is necessity. Disability benefits, whether work-related or for care or help with mobility, are fundamental to millions of people’s lives. They are an “entitlement” that has to be asked for, repeatedly. They pay for the things that most people will never have to consider and needs that most people will never know exist.

The word “benefit” is, in many ways, a misleading one. There is no physical, emotional, or social benefit to being reliant on government support. The situation is made even worse when the rhetoric of “scroungers” or “freeloaders” is employed. 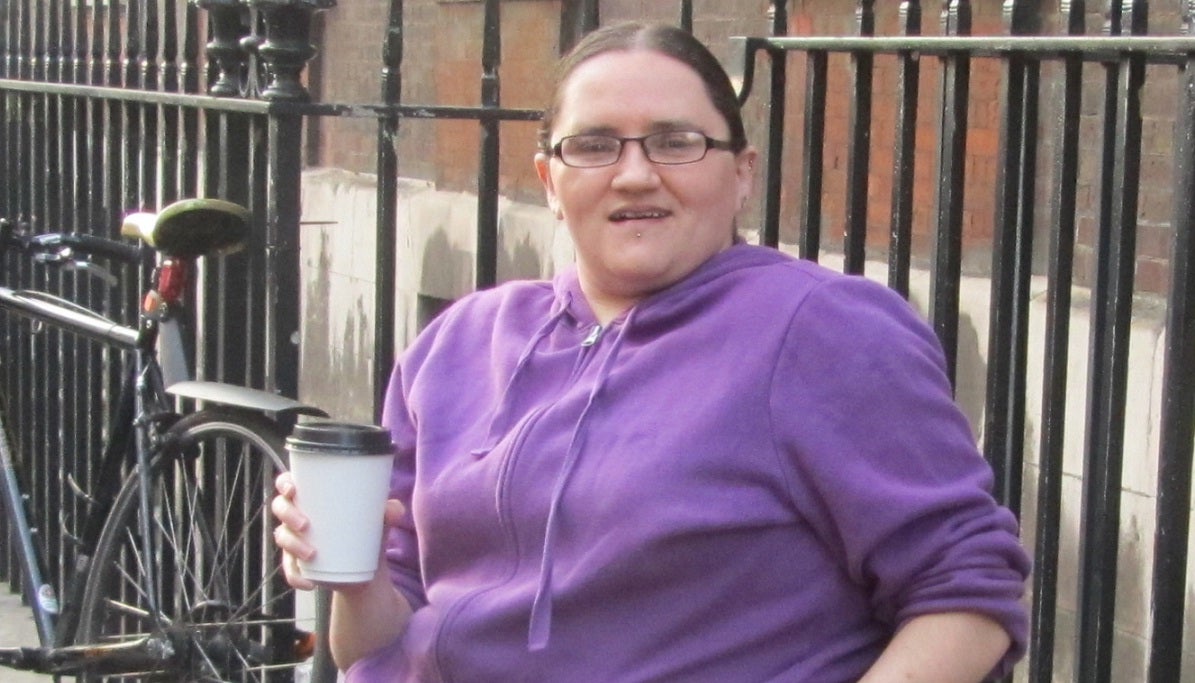 Lisa Egan: “The fear of ‘they’re going to stop my money’ is pretty rough

The benefit Lisa Egan is currently applying for is Employment and Support Allowance (ESA) and the process will take at least 13 weeks. It includes an invasive interview and assessment by the Department of Work and Pensions.

After that process is completed, a claimant’s application is either rejected outright, or placed in one of two groups. The first, the “support group”, comprises those who are deemed unable to work. The second, the “work-related assisted group”, are judged to be capable of taking a job provided they are given support.

For Lisa Egan, this means that the best possible result she can expect is not to be forced to do a job she cannot physically do. She is fighting for around a hundred pounds a week.

That money won’t be spent on luxuries, but essentials. To be without such things is something 41-year-old Daniel Mann* knows well. He was a newly qualified teacher when two brain injuries left him visually impaired and largely unable to walk or use his arms.

Mann completed his first ESA assessment in December 2012. It was successful, but due to a delay in processing the application, he has been left waiting for the money for weeks. When I spoke to him, he was clearly frightened by the shortfall, and was spending the days before Christmas chasing his benefit payment while trying to work out short-term ways to get by. “I called to apply for a crisis loan after running out of food,” he tells me.

He stopped the crisis loan application after a “very helpful lady” at the Department of Work and Pensions promised his ESA payment would arrive the same day. It didn’t, having been lost between two government departments. “I’ve called my energy supplier and council to explain and to request they hold off legal proceedings for outstanding bills,” he says.

There doesn’t need to be a major error like this for the application process to be fraught. Claiming disability support is generally an unpleasant experience; one that simultaneously involves cold bureaucracy and uncomfortably personal declarations. Health is a private thing, but this is a system that demands exposure, intimacy disclosed face-to-face to a stranger and fitted in endless boxes.

Deborah Kelly, 32, has just re-applied for Disability Living Allowance (DLA)  two years after last doing so. DLA is a key benefit to many people: it is not means-tested and unrelated to the applicant’s employment status, and it brings in between £20 to £125 to help with costs such as transport.

“The most difficult but necessary task in filling in the DLA form is to think about your life in a very negative way,” Kelly says. “Why can’t you do X? What goes wrong if you do X?” She was diagnosed with ME as a teenager, and spends most of her life in bed, asleep. “But I don’t really think about that, until I have forms like this to fill in.”

It took her 4,300 words to complete the form. Because of her cognitive and physical problems, each of these had to be typed, printed, cut up and stuck into the relevant boxes. Some of the questions were unhelpfully unclear, and the need to constantly quantify your limitations can make many impossible to answer honestly. “There’s a box only big enough for two digits beside the question ‘How often?’ and you don’t have a clue if you’re supposed to answer how often in a day or how often in a week,” Kelly says. “The form’s designed so that it’s easy to feel that they’re trying to trip you up.”

This feeling quickly leads to an inclination to understate the problem; many claimants are unsure what ‘counts’ and are afraid of being accused of ‘overselling it’ or looking for sympathy. Having previously been turned down for an award (only to be given it back on appeal), Deborah knows that impulse is only worsened by rejection.

“Being turned down is a bit like facing an accusation,” she says. “If you’ve said you need this help and they say you don’t, they’ve as good as said you’re lying.” She tells me that for some years,she has been on a lower award of the care component of DLA than she knows she’s entitled to. “I’ve not had the energy, physically, mentally and emotionally, to fight it.”

The fear of inaccurate and unfeeling assessments has only increased in recent years as the Government, buoyed by misleading rhetoric and a desire for what they call a “greater use of evidence and re-assessment” , has set about sweeping changes to disability and sickness support.

By 2015, DLA is to be replaced by the Personal Independence Payment (PIP); a change that will see an estimated 500,000 people lose their entitlement. Employment and Support Allowance (ESA) has already replaced Incapacity Benefit (IB). All new ESA claimants, and existing IB claimants, are required to take the much criticised Atos-administered Work Capability Assessment (WCA).

Fifty-nine-year-old Mary describes her assessment experience to me as “humiliating”. She’s had difficulty walking since an attack in the street left her with a broken back 18 years ago, and has arthritis in her spine and neck.

During her Work Capability Assessment, her assessor told her to stand in the middle of the room without her walking stick and touch her wrists. “It felt like she was teaching me to do the hoky coky,” she says. After explaining she was unable to do so without her stick, Mary was allowed to lean  against the examination bed to do the exercises. “After a very short time I felt myself sliding off the bed towards the floor, which she [the doctor] did nothing to stop me from falling. My husband caught me just in time.”

She was placed in the work-related assisted group. “I’m 60 this year,” she says.

“We all know ATOS are doing the government’s dirty work,” Gabriel Parlour tells me. Her son attended his Work Capability Assessment a year ago and the anger and distress of it clearly remains.

Born with a severe brain injury, Ashley, now 39, was found by a psychologist to have “no executive functioning” and his mum describes him to me as highly vulnerable. “The findings erred on the side of it being detrimental to my son’s mental health to be found fit for the work group,” she says. “Even so, the so called ‘decision maker’ chose to ignore the recommendations.” He was passed as fit to work. After going to court to appeal, a judge placed Ashley in the non-working support group and told the family he should never be called to such assessments again.

The Parlours aren’t alone in this. As of 2012, around 40 per cent of those who were found fit for work were appealing against the decision, and about 40 per cent of cases which go to tribunal were overturned. “The period of waiting . . . was fraught for both of us, causing much stress and sleepless nights for me,” Gabriel says. “I am ashamed of the country I live in.”

For many, there is a feeling of being abandoned. Claire Whittingham, 31, had been awarded DLA in 2004 after a physical and sexual assault left her with post-traumatic stress disorder and a severe Crohns Disease flare-up.

After a period of homelessness led her to miss the renewal deadline for her award in 2008, she later reapplied, only to be rejected repeatedly. The experience made her feel let down by the system. “My own GP made me feel like a fraud by making snide remarks and saying he was reluctant to write reports,” she says. “He mentioned that in his five-line report to the DWP too. I felt like nobody believed [me].”

The stress of this situation, compounded by facing homelessness again, saw Whittingham taking an overdose.

“It was a Wednesday,” she says. “I sent my last six texts as a suicide note to my ex-partner. She’d helped me with care needs, like showering. By the time I’d taken the overdose she’d arrived with a paramedic.” When asked by hospital staff why she’d tried to take her own life, Whittingham replied that it was because the government wouldn’t help her. “It had been intense fighting for DLA and I’d tried to commit suicide through the stress.”

By the end of 2010, after going to a tribunal, she was awarded low rate care and mobility support for two years; less than she’d received in 2004. The award runs out this month and the process has begun again. “I dread to think what 2013 holds,” she tells me. “I’m scared, confused and alone. I’d like a break from it all. I need to concentrate on various health issues.”

That’s the thing with necessity. No matter how the system treats you, there’s little choice but to go back and ask it for help.

The Department for Work and Pensions (DWP) runs a telephone helpline giving information on benefits for sick and disabled people, their representatives and carers. In England, Wales and Scotland, you can contact the Benefit Enquiry Line on: Tel: 0800 88 22 00 Textphone: 0800 24 33 55.

*name has been changed at interviewee’s request