Feminism: you can define it in many different ways, but the most accurate would probably be ‘destroyer of worlds’. All that harping on and on about equality between the sexes, fair pay, recognition of labour, universal suffrage, and an assortment of other ridiculous so-called ‘rights’ that no real female needs or cares about is quite clearly a veiled assault on men, and therefore the world at large.

Does this viewpoint sound like you? Are you lacking direction in your life, possibly because you sit at home wondering how you can possibly convert all of the hatred and fear of ‘the other’ that you have inside you into serious political action? Don’t resign yourself to a life of merely raving drunkenly at passers-by just yet, for we come bearing good news. Mike Buchanan has started a “pro-men” party that aims to get rid of feminism once and for all – and it’s coming soon to a dank, stinking room above a sub-standard regional pub near you any day now.

“Who is Mike Buchanan?”, you may justifiably ask. A man of many talents, Buchanan is a self-styled business consultant, and, much like George with his apocryphal dragon, he considers it his divine calling to vanquish the feminist death kraken once and for all and be hailed as your spiritual king for ever more. He was described last week by the Daily Mail as “not some lunatic of the Monster Raving Loony Party ilk”, despite the fact that he once claimed that “the Conservative/Liberal Democrat coalition currently in power continues to pursue feminist agendas with some enthusiasm”, something anyone with half a brain knows is complete and utter unadulterated bollocks. The fact that Buchanan has been dubbed sane by the Mail also raises certain questions. 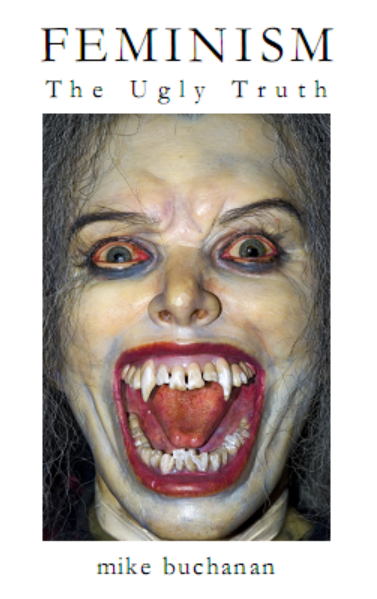 Aside from professional lunacy, he also practices authorship, having written a book called Feminism: The Ugly Truth which is currently available on Amazon, complete with a front cover illustration of a red-eyed vampire woman to really drive home the ferocity and apocalyptic horror of the politically minded female.

“Feminism attracts little serious opposition in the developed world,” the book begins, “which is extraordinary given that it’s systematically and progressively assaulting men, women, marriage, the family, government, the legal system, the media, academia, capitalism and much else.” Thank God Mike’s spotted that one, guys, because we almost wasted a shitload of resources on kidding ourselves into thinking that problems with the government, the media, and the legal system run deeper than the pursuit of gender equality.

Now that we’ve realised the true extent of our destruction, we’re both personally willing to retire to the kitchen without further ado (because feminism is – direct quotation – “forcing [women] to go against their natural instincts and rely on the world of work for their economic survival”.) At Mikey’s behest, we shall give up our livelihoods post-haste in order to restore a natural and utilitarian order. And ‘lo, as we turn our backs on the women’s movement in favour of a lifetime of gooey-eyed, beatific servitude, the sun will rise and our red eyes will once again turn baby-blue as the twin evils of independent thought and liberal ideology are expelled from our systems. Our jagged fangs will shrink back into our silken gums and the snakes’ nest atop our heads will wither, then transmogrify into golden ringlets. Our banshee screams will fade and dwindle, and in their place will emerge the meek, soft mew of the feeble female.

But before we do, permit us to stand on our evil feminist soapbox a few words longer. It goes without saying that crackpots like Mike Buchanan exist in every section of society: fundamentalists routinely make members of all social, cultural, and political groups look bad (including some of the more radical fringes of the feminist movement). But the time that the most successful “news” website in Britain (in terms of sheer numbers) has dedicated to this man and his regressive ideology is shocking; the published comments from the readers even more so. One which states that “the shocking events in India make me glad we have feminists in this country” has been voted negatively 99 times at the time of writing, while “anything that upsets feminists HAS to be a good thing!” has been voted positively 104 times. While it’s easy to laugh at Buchanan and the bogeywomen lurking in his mental closet, this sort of comment juxtaposition is downright depressing. It’s clear that his pro-male political party will not be short of potential recruits. Fear can do that for a movement.

As with many extremist political ideologies, the increased visibility and popularity of Men’s Rights Activists (or MRAs) such as Buchanan can be attributed largely to fear. Fear, paranoia, and hatred. Fear that white working class men are set to become a “minority” (David Willetts this week confirmed this by comparing them to other “disadvantaged groups”); paranoia that such disadvantages are caused by the increasing emancipation of women, out there, spreading their tentacles, passing exams, and taking the world by storm, like the demented harpies that we are; and hatred of those women, with their vaginas and their soft smooth skin and their Child Support Agency. The bitches.

While we’re not denying that there are many male-specific problems which are not being adequately tackled – not least the alarming suicide rate among young men, which Buchanan seems to imply is also feminism’s fault – laying the blame at the door of women is an astonishing jump in so-called logic. All the major political parties seem to be doing a rather nice job of championing male interests already, and although the coalition clearly couldn’t give a toss about the working class, the fact that they only have five women in the cabinet doesn’t exactly signify the ‘state-sponsored feminism’ that Buchanan sees lurking in the dark corners of his proverbial bedchamber. So where’s the beef?

Fear, as we know, is not a rational emotion. So often is it rooted in ignorance, in misunderstanding, and in the hounding of the scapegoat. In light of this fear, society’s failure to create a more equal class system with increased social mobility becomes unimportant, as does the fact that men created that class system in the first place.

Embarking on a witch hunt is far easier than questioning why none of the political parties seem to reflect the interests of the worker. Blaming the pair of yellow female eyes peering from the dark is much simpler than asking why these men have become the casualties of such a system. These questions go to the very core of capitalism, and they make your head hurt.

There is no room for subtlety in the all-out assault of gender conflict. After all, Buchanan is busily engaged with the slaying of the mythical monsters beneath the bed with the use of his phallic lightsaber of masculinity, which makes us wonder whether the jump between his politics and the Raving Loony lot is actually that large. Perhaps he’d be better off abandoning his own efforts in favour of the party devoted almost entirely to monsters. At least he’d have a laugh.