For this week’s cover story, the New Statesman reflects on the crisis of British Institutions. From banks to big business to the BBC – are the powerful incapable of holding themselves accountable? Featuring: David Herman on Newsnight and the BBC, George Eaton on Westminster scandals, Jonathan Derbyshire and Alex Hern on big business and tax, David Allen Green on royal privileges, and Peter Lazenby on police corruption at Hillsborough.

David Herman: A culture of unreason

The BBC is the latest institution to be marred by scandal and kicks off our Something’s Rotten cover story. But Jimmy Savile aside, former BBC producer David Herman argues there is a greater identity crisis brewing. The BBC no longer knows who it wants to be. “Amid the media frenzy over Newsnight,” he writes, “the bigger questions have been ignored.”

Newsnight and Panorama reflect deeper difficulties at the BBC: falling budgets and declining audience share, on both BBC1 and BBC2. Panorama has responded by dumbing down. Rippon might have put ratings first and gone for the “Jimmy Savile was a paedophile” splash. He didn’t and it looks as if he didn’t for journalistic reasons.

The Panorama investigation into Newsnight’s shelving of the programme on Savile was symptomatic of the problem. It was all heat and very little light. The producers had the heart-rending testimony of several men and women who had been abused as children. However, despite much innuendo, they couldn’t find anyone else, at the BBC, at the Crown Prosecution Service, in Surrey Police, or in any of the named institutions, who could confirm anything. As for the allegation that Rippon had dropped the story because of pressure from above, they found no evidence to back this up.

…This is part of a bigger battle over the future of the BBC. Some say that as audience share plummets, sports rights disappear and the BBC can no longer bid for US hit shows, its only future will be as a kind of glorified Radio 4: news and current affairs programmes and a global brand, with a few bits and pieces in between. No more sport, prestige drama or serious history programmes.

Brian Moore: I understand why Savile’s victims didn’t speak out about their abuse

Speaking from his own childhood experience of abuse, former rugby “hardman” Brian Moore condemns the BBC’s failure to properly investigate abuse claims and explains why their failings will only make it harder for victims to come forward.

The issue of child abuse has been hijacked by the press as a way of deflecting from its own nefariousness on phone-hacking and bribing of public officials. Why didn’t the papers act on rumours they now say were very clear and publicly known?

…What is lost in all this is the victims. The accusations are focused on institutions and authority, with the individual cases lost in a running total of victims that the tabloids seem keen to inflate. There are and will be calls for more procedures and schemes and vetting to ensure this never happens again. But it will happen again, and what is not needed is another raft of process-driven, box-ticking certificates of safety.

I and many of Savile’s victims did not tell because we did not think we would be believed. What we victims need is not just an immediate person being sympathetic and taking a statement. We need to know that a proper investigation will be made if we make a complaint; to know that the Crown Prosecution Service will be robust and that every effort will be made to secure a conviction. So harrowing is the telling of our stories that we have to have utmost faith that as much as possible will be done to rectify the wrong and to help us bear the extra stress of an investigation and trial.

David Blanchflower: Why unemployment has fallen, and why it will rise again soon

In the Economics Column this week, David Blanchflower tackles the puzzling unemployment variations between the US and the UK, unscrambles the data surrounding the UK’s recent drop in joblessness, and warns it will rise again:

The most unexpected figures recently were the big drops in the UK’s headline unemployment number and rate. However, the way the Office for National Statistics (ONS) reports the numbers – as three-month rolling averages – doesn’t really help us understand what is happening. It turns out that this occurs because of concerns about the variability of sample estimates that arise because the survey from which the numbers are extracted – the labour force survey (LFS) – is underfunded and sample sizes are so small that there is a lot of month-to-month variation

…Something strange appears to be going on. Note that employment fell in the past two months, from a June peak that is likely distorted by the Olympics, as well as by young people who may not enter education in part because of the increase in tuition fees. So the unemployment rate is likely to rise; the Bank of England agents in their October report suggested that there would be “little job creation” in the private sector over the next six months and their past predictions have been reliable.

… I was wrong on the latest figures, to the delight of some my Twitter followers, but I suspect unemployment will rise sharply again and soon.

Rafael Behr: Miliband is sneaking up on power without a plan for government

In the Politics Column this week, Rafael Behr takes a close look at Ed’s campaign in opposition, and wonders how long he can continue to offer an “austerity-lite” program without embracing the painful reality of public service on a tighter budget – and the enemies is will make him. He writes:

Ed Miliband has had the freedom to work on his political stance like a wannabe rock star trying out stage moves in the privacy of his bedroom. His statements of intent to contain the deficit are the policy equivalent of air guitar – roughly the right position but not very revealing about what he would do if plugged into instruments of real power.

…Others are less sanguine, fearing that failure to signal reforming intent – pretending, for example, that the rationing of NHS services is proof of Tory malice towards the health service as if demographic and budget pressures were not also a factor – is dishonest. Voters will smell the deception. Labour could still scrape into power but then hit a wall of public revulsion as misty-eyed promises of change give way to more of the same. It is a scenario that one shadow minister describes as “Labour ending up as the Nick Cleggs of 2015.”

… Serial Tory blunders have afforded Labour space to work out what kind of opposition it wants to be. As well as thanking his luck, Miliband should consider why this has happened. It must be tempting to think that Cameron just happens to be congenitally incompetent. Another explanation is that some of the disarray expresses how hard it is to govern in austerity and how easy it is to make powerful enemies of public servants – nurses, teachers, police officers – when taking their money, pensions and job security away.

Miliband imagines doing things differently. His plan involves promising epoch-defining change to the way society and the economy are structured without divisive talk of winners and losers – the cosy “one nation” revolution. It is a feasible strategy for sneaking up on power but with a hollow mandate. If Miliband forms a government without permission to inflict pain or make enemies, he will quickly find Britain ungovernable.

The problem, however, is a lack of healthy skepticism – “Ganesh believes too readily in the myth of Osborne’s strategic ‘genius’ and is too willing to forgive what to some is unforgivable – the way Osborne talked down the economy in the months after the 2010 general election …” He write further:

If the general narrative of Osborne’s rise and embrace of austerity economics is covered well enough, the larger problems of the book are of style and tone. Ganesh writes with comical awe and reverence, for instance, about Rupert Harrison, Osborne’s 33-year-old advi­ser, who was “among the outstanding micro-economists of his generation”. Harrison has a “powerful mind”; his “ambition is cloaked by a magisterial personal style”; he has a “capacious hinterland”. It’s as if Ganesh were describing a latter-day John Maynard Keynes, whose intellect Bertrand Russell once said “was the clearest and sharpest” of anyone he ever encountered.

…Because the book is not a psychological portrait of Osborne and because it fails to convey any convincing sense of its subject’s inner life, it reads mostly as an exercise in nearly-history: a standard, often perfunctory recounting of recent political events, awkwardly written…. The book suffers by way of comparison with Francis Elliott’s and James Hanning’s biography of David Cameron, which over its several editions has broadened and deepened to become a work of merit, at once measured in its judgements, calmly and precisely written and authoritative. Ganesh’s judgements are too often swooning and overheated.

ELSEWHERE IN THE MAGAZINE:

Mistrust is deepening between the Europhobic David Cameron and the Eurofanatic Nick Clegg. I hear Downing Street insisted that a No 10 minder attend a meeting in the Deputy Prime Minister’s Cabinet Office lair with Herman Van Rompuy of the European Council. Van Rompuy is that elusive creature, a near-famous Belgian. Clegg is even rarer – a polyglot Brit. The Lib Dem internationalist has five languages: French, German, Spanish, Dutch and Tory. Irritated at No 10’s snooping, Clever Cloggs conducted the entire session in Dutch, so the PM’s cloth-eared spy was left fuming in the corner, listening but not understanding a double-Dutch conversation.

Samira Shackle: The girl who played with fire

A special report from Pakistan on the shooting of the teenage rights activist Malala Yousafzai: Samira Shackle describes how the Taliban attack has sparked a wave of protest and speaks to women’s rights activists who have defied violence and the threat of murder. But, she asks, are these women being let down by their own government’s ambivalent attitude to Islamic extremism?

And introducing: A new regular comic from Tom Humberstone

Award winning comic artist and illustrator Tom Humberstone joins the New Statesman this week. His topical comic strip “In the Frame” will be a regular feature in Observations. 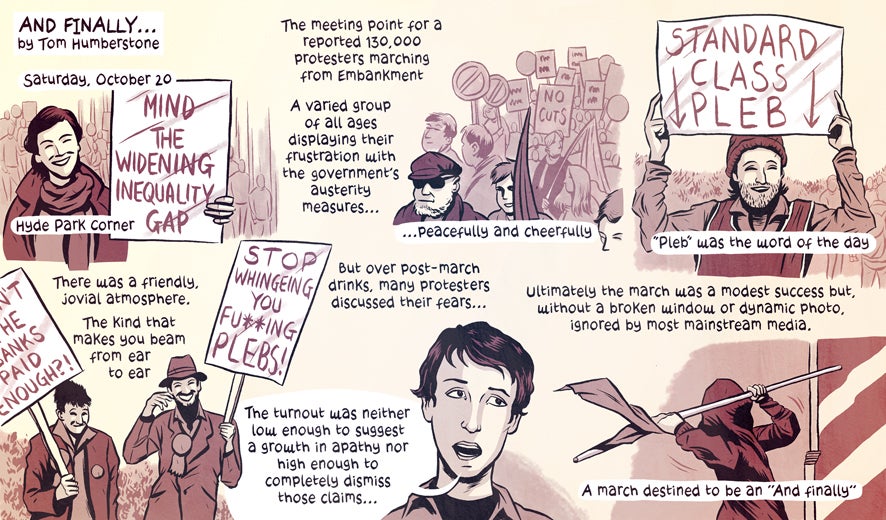 In the Critics this week, Richard Mabey writes his last seasonal diary of the year. “Mid-autumn … has a special frisson on the Norfolk Broads,” Mabey observes. “The reeds begin to bleach and reflect the sunsets … The last migrants leaving for Africa cross with the first arriving from the tundra, the swallow flying under the goose.”

In Books, NS editor Jason Cowley reviews Jana Ganesh’s biography of George Obsborne. Sarah Churchwell is put off by the sentimental uplift of AM Homes’s novel May We Be Forgiven; Yo Zushi finds much more nourishment in David Byrne’s How Music Works; Leo Robson reviews Tom Wolfe’s new novel Back to Blood; William Skidelsky contests Steven Poole’s attack on “foodism” in You Aren’t What You Eat; and Beatles biographer Hunter Davies recalls the moment John Lennon called his book’s carefully cultivated image “bullshit”, and admits perhaps he didn’t told the whole truth.

Elsewhere in the Critics: Ryan Gilbey on Sam Mendes’s Bond film Skyfall; Rachel Cooke, for better or worse, calls Lena Dunham’s Girls “like nothing you’ve ever seen before”; Antonia Quirke listens to Simon Callow’s wine-tasting on Classic FM; and Alexandra Coghlan watches a screening of the multimedia installation Decasia, performed with a live score, at the Southbank Centre.

And in Real Meals, Will Self contemplated the “gravy and hard biscuits” diet of the American south-west, as immortalized by John Steinbeck’s The Grapes of Wrath.

Purchase this week’s issue of the New Statesman on newstands today, or online at www.newstatesman.com/subscribe