Paul Ryan made his big speech at the Republican National Convention last night, and ThinkProgress summed it up best: “An energetic, post-factual speech by Ryan.” Time and again, Ryan mislead, misspoke, and made “Demonstrably Misleading Assertions“.

If you’re interested in the politics of it, he’s also been attacked on style – Mother Jones’ Kevin Drum recalled Harrison Ford’s famous snipe to George Lucas, “you can type this shit, but you sure can’t say it” – and doubtless, his “John Galtesque” evocation of the mythical grey, socialist hellhole of Obama’s America will win over some. But if Ryan gets away with some of what he said, political discourse in the United States has a lot to answer for.

The most egregious of Ryan’s statements was an attack on Obama for failing to protect a General Motors plant in his constituency:

A lot of guys I went to high school with worked at that GM plant. Right there at that plant, candidate Obama said: “I believe that if our government is there to support you … this plant will be here for another hundred years.” That’s what he said in 2008.

Well, as it turned out, that plant didn’t last another year. It is locked up and empty to this day. And that’s how it is in so many towns today, where the recovery that was promised is nowhere in sight.

The plant’s closure was announced in June 2008, over six months before Obama was inaugurated. Ryan probably knows this, because on 3 June, he issued a statement bemoaning the closure.

Given his (completely undeserved) reputation for being a serious, competent man when it comes to fiscal policy, one would expect Ryan to be better when dealing with those matter. Sadly not.

Ryan said “President Obama has added more debt than any other president before him”. In fact, as the New Republic point out, by far the largest aspect of this decade’s deficit projection is the Bush-era tax cuts – and unlike the bailout and stimulus, those tax cuts are unlikely to be a temporary measure, and certainly wouldn’t be repealed by Romney. 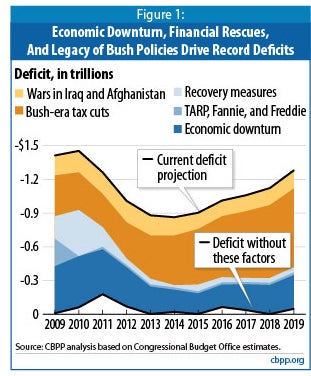 Ryan also tried to blame Obama for the US downgrade. S&P, in their rationale for the downgrade, explicitly blame the Bush tax cuts, and explicitly blame Congressional Republicans – of which Ryan is, of course, one – for the failure to scrap them. And more generally, the blame for the fear of a US default in the Summer of 2010 lies exclusively with the Republicans, who engineered the debt ceiling show-down.

Ryan also attacked Obama for not acting on the recommendations of the Simpson-Bowles commission, a bi-partisan body, on which Ryan sat, formed to examine the national debt. Obama didn’t do a whole lot with the recommendations – but only Ryan actively voted against the report.

If he can’t avoid misleading even in the areas where he claims special competence, Ryan certainly isn’t going to be a stickler for accuracy in the broader debate. A lightning round-up of various “facts”, checked:

Ryan opened his speech by attacking Obama for the negativity of his campaign, and then proceeded to spend the next half hour doing nothing but attack Obama – largely for things he didn’t actually do. It signifies a candidacy, and a presidential race, which has fully embraced the post-truth age. Don’t believe me? Even Fox News have called Ryan’s speech deceiving, concluding:

Republicans should be ashamed that there was even one misrepresentation in Ryan’s speech but sadly, there were many.