According to the author of a brief Life, published in 1936, Ando Hiroshige (1797-1858) was “born to a corrupt age in holiday mood”. The artist himself, however, though far from immune to the pleasures of the flesh available in Edo period Japan (he was a noted epicurean and a sake drinker), was less interested in the vagaries of man’s moral state than in the timeless certainties of nature.

It was Hiroshige who, with the more celebrated Hokusai, perfected landscape in ukiyo-e art. Ukiyo-e – “pictures of the floating world” – was a style of painting and woodblock printing that dominated Japanese popular art between the 17th and 19th centuries. Its traditional subjects were beautiful women, actors, folk tales, and flora and fauna. Landscapes had also long been depicted but not with the subtlety and compositional daring Hokusai and Hiroshige brought to their work.

This startlingly original print, variously known as Jumantsubo Plain in Susaki near Fukagawa or Eagle over Susaki, was made in 1857 by Hiroshige as number 107 of his 119-print series One Hundred Famous Views of Edo (two of which were the work of his son-in-law Hiroshige II after the master’s death). The views, in the vertical format he pioneered, were published in serial form between 1856 and 1859 and proved hugely popular. They show not just scenes of Edo (Tokyo) but sights from the surrounding countryside. Characterised by a high viewpoint and an exaggerated perspective, many also deploy compositional quirks – a view seen through a tree branch that has grown in a circle, a road shown from between a horse’s legs, a rainbow over a harbour but with two dogs sniffing one another on the quayside. Hiroshige, before or after his sake, was never afraid to be daring.

With the eagle, Hiroshige reprised his early-career fascination with birds. The creature is an extraordinary invention, almost cradling the frozen landscape below in the curve of its wings as it scans the ground for prey and prepares to dive. The snowy marshland he depicts was known as Jumantsubo, named for its size – 100,000 tsubo (about 80 acres), and the double peaks in the distance that subtly mirror the eagle’s shape are those of Mount Tsukuba. In his mind perhaps was an 8th century poem by Takahashi no Mushimaro which begins: “On the Mountain of Tsukuba/ Where the eagles dwell.” If so, the poem’s influence was restricted to these opening lines, since it then goes on to describe the mountain as a well-known venue for adulterers. There may be bodily warmth on offer in the distant houses that can just be made out, but in the star-flecked outdoors there is nothing but an icy chill. 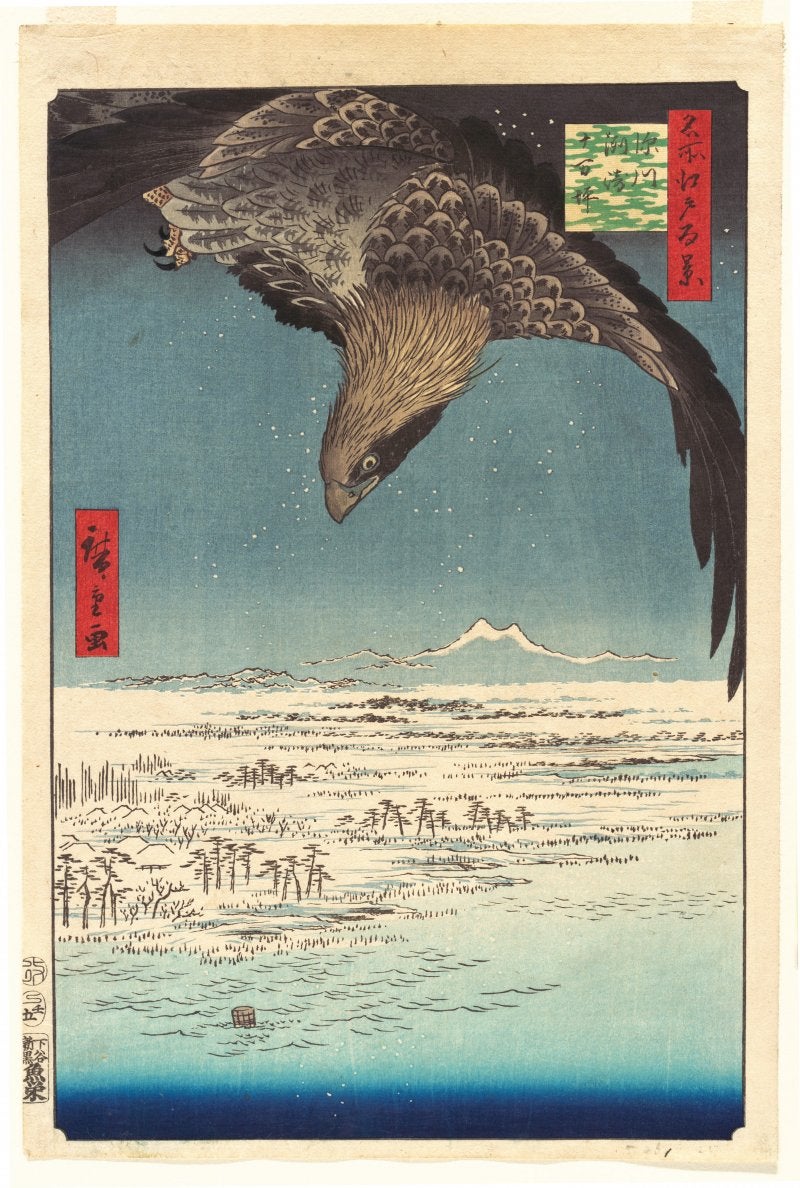 Hiroshige made some 8,000 prints during his career – not all, it must be said, of this quality of design. There is, though, a poetic sensibility to most of them rather than simply a concern for topography. The artist himself wrote both serious and humorous verse under the pen name Utashige, and in one short poem poked fun at his own appearance: “Putting aside the moon and snow,/How delightful it is to live roundly/With a head more round/Than a dumpling round and round!”

Hiroshige was a man who knew his own mind. He was born into a samurai family and his father was fire warden for the Yayosu Quay area, a job he passed on to his son, and which Hiroshige in turn later passed on. When he decided to become an artist he trained under Utagawa Toyohiro and, as was traditional, used part of his master’s name for his own art name, Hiroshige. When Toyohiro died, however, Hiroshige refused the offer to take over his workshop, preferring to establish an independent career.

For all his success he never became wealthy – artists merely provided designs for the woodblock prints, which were then carved and printed by specialists. It was the publishers who made money from them. At one point, wishing to travel round the country, Hiroshige’s wife secretly pawned clothes and jewellery to raise funds.

His sheer fecundity eventually wore him out and at the age of 60 Hiroshige “retired from the world” and became a Buddhist novice, although he couldn’t stop himself painting. He died two years later during the cholera epidemic that caused havoc in and around Edo. He seems to have slipped from life with equanimity, leaving a final poem that reads: “I leave my brush in the East/And set forth on my journey./I shall see the famous places in the Western Land.” That Western Land was not Europe but the region of Japan he had long wanted to visit on the other side of the Hakone mountains.

Hiroshige’s pictures did, though, travel to the West – sometimes ignominiously as packaging around porcelain – and became hugely influential. It was Hiroshige even more than Hokusai who was responsible for late 19th-century Japonisme, that fad for all things Japanese. His prints were not just sought after for their exoticism and decorative qualities by artists from Whistler and Degas to Van Gogh and Monet, but showed them a new, bold way of using design. It is impossible, for example, to imagine Monet’s waterlily paintings without Hiroshige’s influence, while Van Gogh was so struck by his work that he painted copies after two of the Edo prints and tried to set himself up as a dealer in ukiyo-e art. Hiroshige’s eagle had flown a long, long way.

This article appears in the 10 Jun 2020 issue of the New Statesman, A world in revolt