There is little evidence in Harvesting, a charming and amusing picture of harvesters, rabbit catchers, idlers and canoodlers that the artist, John Nash (1893-1977), was a painter haunted by his experiences of the First World War. In 1917 his regiment, the Artists Rifles, was involved in a counter-attack against the Germans near Cambrai. As the men went over the top, he recalled, there was silence and then: “Suddenly the Germans opened up and that seemed to be every machine gun in  Europe…” Of the 80 men who climbed out of the trenches, only 12 returned alive and unfounded: Nash was one of them. Although his brother Paul was a better known war artist, John’s 1918 painting of the episode, Over the Top, poignantly captures the leaden-footed fatalism of the soldiers – not just weary but life-weary – as they trudge into no man’s land towards their deaths. 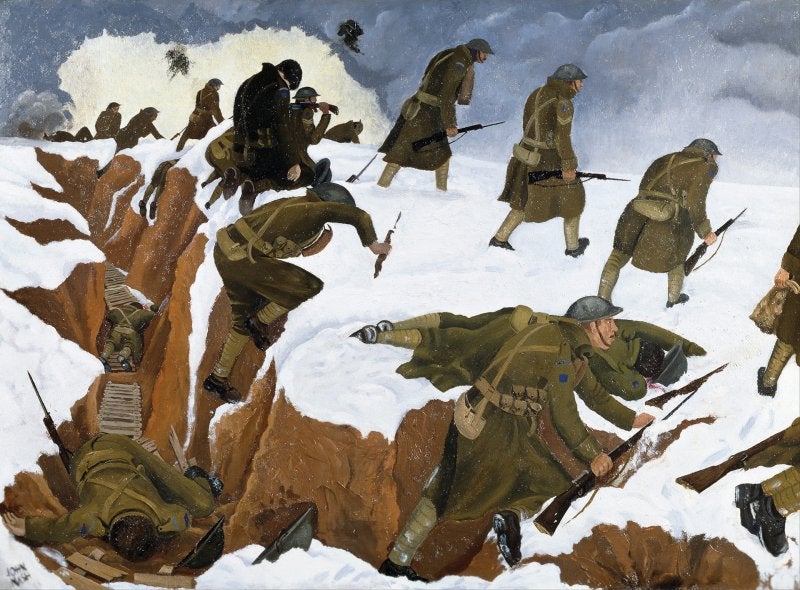 Those fallen comrades are an implicit presence in a very different painting, made that same year. The Cornfield shows a dipping landscape sliced with shadows cast by the evening sun; it is empty of people but there is instead a line of corn stooks. For many, the picture is simply an idyll of fecundity but the tilting sheaves resemble a little too much tumbled men or gravestones. It may show an English rather than a Flanders field but it gives uncomfortably literal form to the idea of soldiers cut down in rows.

After the war, Nash used nature as his restorative, first in Buckinghamshire and later in the Stour Valley on the Suffolk-Essex border, where he was to live for 30 years and where Constable had painted more than a century earlier. Nash made a career as a landscape painter, botanical illustrator, art critic, wood engraver and teacher. His life, however, was not free of tragedy: he survived the Spanish flu pandemic in 1918 but in 1935, his only child, William, died aged just four when he fell out of the back of a moving car. Small wonder Nash’s pictures of quintessentially English landscapes (he almost never included people in them)  often have a melancholic undertow. 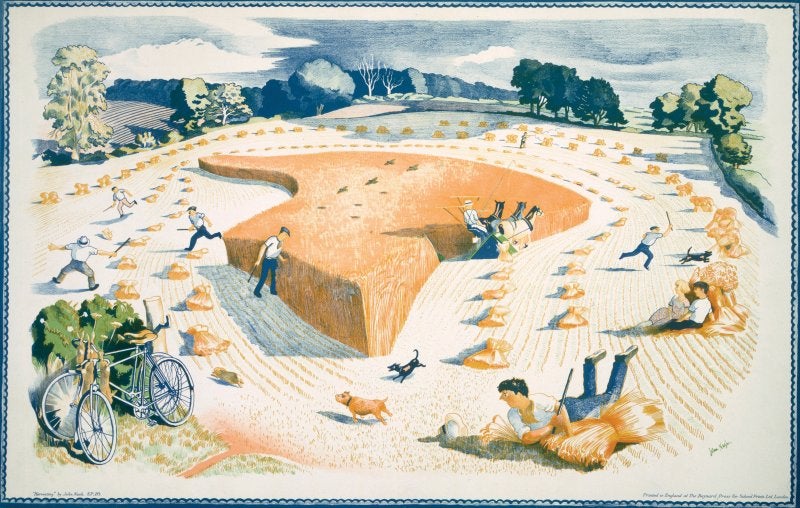 In Harvesting of 1947, however, the corn stooks are simply corn stooks and the elegiac atmosphere of The Cornfield is now bucolic-comic. This is a near caricature of country life, a salve for a population emerging from another war and confirmation that the old rural ways had survived intact. The simplicity and light-heartedness of the picture were, though, no aberration; Nash’s audience was not adults but children.

When Derek and Brenda Rawnsley, a pair of idealistic internationalists, married in 1941 they discussed the idea of producing cheap prints by living artists for use in schools. The scheme had failed to progress, however, when Derek, serving in the RAF, died in Kenya in 1943 leaving Brenda a war widow at 27. In 1945 she revived the scheme, School Prints Ltd, and brought in the great panjandrum of modern art,  Herbert Read, to advise her.

They asked selected artists to produce a lithograph of uniform size using no more than six colours that could be mass produced and circulated to some 4,000 subscribing schools. All the pictures, on cheap paper, were to have printed borders so they could be pinned directly on to the wall. “We are producing a series of auto-lithographs,” she wrote in her letter of invitation, “four for each term, for use in schools, as a means of giving schoolchildren an understanding of contemporary art. By keeping the price as low as possible, we are able to bring this scheme within the reach of all education authorities.” In return for their picture the artists would get a modest fee, £80 with a royalty of £5 for every 1,000 prints sold.

Several series, and some 30 prints, were eventually produced. As well as Nash, numerous other major artists ascribed to the School Prints ethos of art and education, among them Henry Moore and LS Lowry and, later, when Rawnsley decided to issue a French series, Pablo Picasso, Fernand Léger, Henri Matisse, Raoul Dufy and Georges Braque too. While many of the English artists produced safe subjects – funfairs, port scenes, circuses and the like – the continentals were less accommodating. Picasso, for example, knew full well he was making something “pour les enfants anglais” but that didn’t stop him producing an unapologetically avant-garde picture – a bit of one-upmanship perhaps to show how advanced European art was. It was the difficulty of the more consciously modern pictures that was eventually to sink the scheme.

Nash, however, took Rawnsley’s brief at face value. With Harvesting children could will on the rabbits in their helter-skelter escape, laugh at the sleeper disturbed by two excited dogs, wonder what the couple reclining against a stook had been up to, and hope the distant huntsman was a rotten shot. Nash, a man who had experienced life at its most deadly serious, wanted his picture to do nothing more than delight.

This article appears in the 22 Apr 2020 issue of the New Statesman, The coronavirus timebomb