A week ago, a French TV interview of a student union representative sparked a national debate. Not because of what she said, nor because her union supports the student protests against Emmanuel Macron’s reform of the French university system.

Maryam Pougetoux, 19, faces criticism for speaking publicly as the president of student union Unef for her university, Paris IV, while wearing her hijab. Defenders of French secularism, the media and even members of the French government have condemned her headscarf.

France is a secular state. But does it really mean a woman wearing a headscarf cannot advocate for political causes or represent a union? 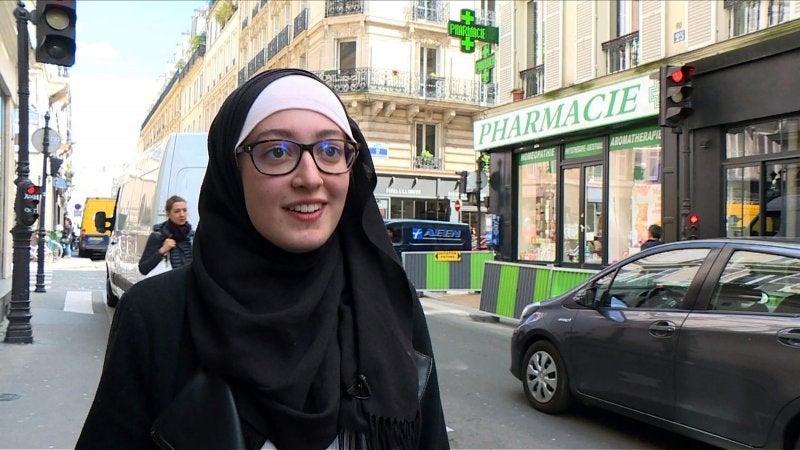 The French’s constitutional ideology of laïcité, or secularism, establishes state secularism in the public sphere. Church and state are separated by the 1905 law, which also recognises freedom of religion.

The concept of laïcité has led to rocky debates in the past. In the summer of 2016, the “burkini ban” made headlines worldwide after French towns banned the outfit from their beaches and the then prime minister, Manuel Valls, called for the “discretion” of Muslims in the expression of their faith. Islam, already subject of heated debates in France before the terrorist attacks of 2015 in Paris, has become the secularists’ favourite topic of discussion.

Since March 2016, a cross-party movement called “Printemps Républicain” (“Republican spring”) has been “promoting secularism” online. It was a Facebook post from Printemps Républicain that sparked the current row, citing an “incoherence” for a Unef representative: “How can she simultaneously defend progressive, feminist principles (contraception, abortion, gay marriage) and ostensibly display her religious beliefs?” (Unef is considered a left-wing, progressive group, but does not solely focus on these issues.)

French media regularly splash on Islam and Islamism, often blurring the two. In an added layer of provocation to an already sensitive news story, the latest issue of Charlie Hebdo has portrayed Maryam Pougetoux as a monkey wearing the hijab.

The French government weighed in, too. The state secretary for gender equality Marlène Schiappa recognised Pougetoux’s right to wear the hijab (wearing visible religious signs is prohibited at school but not university) but judged it ill-fitted to her political engagement. “I see it a form of promotion of political Islam,” she said. Gérard Collomb, the defence and culture minister, declared it “shocking” that a Unef representative would wear “le voile” (“the veil”), as the hijab is referred to in French. “It is proselytism. There are a number of people who, through these [religions] signs, are trying to be provocative,” he said, adding: “Is Islam, in the end, an Islam that is wishing to converge to French culture?”

The students union Unef, a vocal champion of left-wing, progressive values, was deemed incompatible with the conservative values attributed to a “veiled” woman. That the union itself gave its full support to Pougetoux changed nothing.

To Florence Bergeaud-Blackler, a researcher at the Institute for Studies on the Arab and Muslim World, the debate lies with the values conveyed by the debated religious sign – here, Pougetoux’s hijab. Because wearing of the veil is linked to “non-mixed social behaviour and a very conservative moral discourse that revisits our society’s liberal progress such as a couple’s union outside of marriage, gay rights, contraception and abortion”, she understood why left-wingers could question the union’s choice of representative, and whether “religious groups might carry out entryism within student groups”. She added: “The only way to decide is to ask the young woman why she chose Unef, and if her values are compatible with left-wing, liberal values.”

“It is my faith. I shouldn’t have to justify myself.”

Did anyone ask Pougetoux about her political opinions before jumping to assumptions? In an interview with BuzzFeed News, the young woman called the whole debate “pathetic”. “I wasn’t expecting it to become a government matter,” she said. “My veil has no political function. It is given a political meaning that I don’t give it myself.” She said no one at the student union had ever commented on her hijab and that she had “accepted [the union]’s values” just like it had accepted her: “without prejudice and with benevolence.” “It is my faith”, she said. “I shouldn’t have to justify myself.”

It is not the first time a woman in a hijab has been prevented from existing on her own terms in the French public sphere. In February 2017, the singer Mennel, 22, a candidate in the French version of The Voice, was forced to leave the show after self-claimed defenders of secularism, angered by her hijab, unearthed some social media posts in which she addressed conspiracy theories about terrorist attacks in France. If the posts, for which she whole-heartedly apologised, were of poor taste, it was her hijab that had triggered and dominated the row around her. In December 2017, Rokhaya Diallo, an anti-racism and feminism advocate, newly-appointed as an advisor to Macron’s digital council, had to quit after members of the government raised concerns over her anti-racism views and her defense of the hijab. Diallo tweeted that what happened to Pougetoux, just like Mennel and herself, was “a hunt for presumed Muslims, who have the audacity to make themselves heard.” An op-ed in Libération described a similar pattern: “In the end, it is simple. If one wants to exclude a Muslim person from the public debate, one only has to accuse them to be an Islamist.”

To Dounia Bouzar, an expert at the National Observatory for Secularism, the threat of Isis (Daesh in French) has led to a binary view in French society, and it is Muslim women who pay the highest price. “Muslims are less and less able to contribute to society as citizens, especially women,” she told me. “As soon as they wear the hijab, they are suspected of being non-Republican [against the French state]. In other countries, like Germany and the UK, the hijab doesn’t bring such thoughts.”

To Bouzar, the problem for women in the public sphere, like Pougetoux, Mennel or Diallo, isn’t that they aren’t listened to: “It is that we think that behind them is a group manipulating them, to ‘threaten the Republic’… It’s worse than not being listened to. They are seen as the enemy from within.”

“As soon as they wear the hijab, they are suspected of being non-Republican.”

The government’s response, she said, is very disappointing because she hoped Macron’s presidency would let Muslims define themselves: “What is violent for Muslims is that they are defined by others.” If ministers find a hijab “shocking” on a student union representative, “it validates the Islamist interpretation”, Bouzar explains. “It sends the message that there is no other interpretation [of Islam].” The president has promised to “reform French Islam”, but a better start might be not to define the Muslim faith without listening to its adherents.

Whatever they wear – and whether or not it is their choice – Muslim women in France find themselves in the middle of a secularism debate they have no voice in. They are guilty by association: it is assumed that their hijab is a sign of their adherence to conservative societal values preached by a strict vision of Islam, values that many in France see as incompatible with French secular society. The religious indicator overrules individuality.

Muslim women can have a modern interpretation of Islam and their own vision for feminism, Bouzar said, but it is not recognised in French society. “They cannot say: ‘I wear the veil, but it isn’t by obedience to a man, it is a link with God that gives me strength.’ Others define the veil for you. They act as if it is a sign of submission.” The student Maryam Pougetoux herself said so to BuzzFeed: “I wear [the hijab] by choice. I defend all women, whether they wear it or not, whether they are Muslim or not. There isn’t just one kind of feminism.”

Pougetoux summed up the Catch-22 situation French Muslim women find themselves in: “If we stay at home, they say we are submissive. If we speak up, if we take action, they say that we are not allowed to do so.”  She added that she hoped the debate around her veil would make minds evolve, and that “people will tell themselves that it’s possible to be a woman, a French citizen, a Muslim, veiled, a student, and to take action for others”.

That has been her mission all along. In her original TV appearance, Pougetoux talked about the student union meeting she just attended. “It is a democratic space,” she said. Her veil made the whole country fret – but no one had listened.