So, for my third date, I was theoretically back in the realms of "normal" dating. I could steer away from the completely ridiculous niche sites that I'm doing for your benefit, dear readers, and concentrate on actually trying to find someone who I might be able to fall in love with. Yeah, maybe I am being unrealistic - but that's why I'm actually doing this.

Of course, it's me, so it never ends up that way - here's the Facebook chat to a mate this particular foray out into the wastelands of the internet produced: 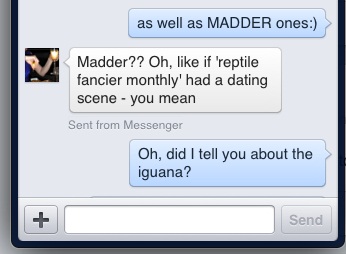 Don't worry, we'll get on to exactly how a reptile of the family iguanidae got involved in a date. To be fair, it was probably my own fault for going on a website called "Geek2Geek".

Now, it was my desire to meet someone I might actually have something in common with to choose this particular dating site for a "normal" date - I am pretty unashamedly a bit of geek myself. I'm also not the kind of "soft" geek who is like "oh, yeah, I saw Lord of the Rings once, you know, erm, hobbits are cool". Not the kind of person who owns two "ironic" Star Wars T-shirts. I'm the real deal. World of Warcraft account; weekly 2000AD reader; I used to blog about model soldiers, for goodness sake. I occasionally write bitter reviews of how I feel "let down" by notable sci-fi writers.

I've never been lucky enough to date a girl who did anything more than really tolerate my hobbies - indeed, my longest term girlfriend once turned round to me in bed (we were living together at the time) and said "If I asked you to choose between loving me and toy soldiers, what would you choose?" I of course, replied "If you really love me, you wouldn't ask me to choose". Which obviously meant "FUCK YOU, MODEL SOLDIERS".

Not really. If she'd asked me, I'd have very reluctantly boxed them up and sold them, but I'm honest enough to admit it would have really hurt. I'll admit to a certain jealousy of friends who have lovely wives they can sit down and play X-box with, or curl up under a duvet and watch Aliens for the 200th time. I suspect Geek2Geek may not fit everyone's definition of a normal, mainstream, dating site of the Match/Soulmates variety - or does it? My own gut feeling is this sort of person, of whatever gender, is pretty common these days. I recently discovered one of my most stunningly attractive female friends is an avid roleplayer, for example (tragically, she's not attracted to men).

So I figured I could meet someone in that bracket. Now, I wasn't looking for someone with identical likes to me, just someone who might not react with abject horror if I said "so how about we go to that Alien movie marathon at the Prince Charles Cinema". Geek2Geek's community is pretty enormous, and although it's clearly bigger in the US than the UK, there were plenty of people in and around London. Within a week of trying, I'd arranged a date.

So, after work, I popped to a local pub and sat waiting for the person I was due to meet. She was 28, worked in "digital engagement", and in her profile picture, looked lovely, smiling, and obviously enjoying the great outdoors with flowers looped into her hair. Thus, I was a little surprised when someone who looked nothing like the picture tapped me on the shoulder and said "Hello, are you Willard?" Now, I understand in this online dating game, it's common to lie on your profile, but using a flattering photo from 8-10 years ago probably does you no favours. Yes, the person may meet you, but when they meet you, their initial reaction is always going to be "you don't look like your picture".

Indeed, where she'd had the picture taken (I thought it might have been at a music festival), she talked about how much she'd "had" to photoshop it. So, yeah. Digitally manipulated photograph. At least she was definitely on the level about her computer skills... So, we got to talking, over a couple of drinks. She talked about:

So, after about an hour, I explained I had a really important article to write the following day, made my excuses, and left, but not before saying "We should totally do this again, as friends." Pretty sure it was mutual; neither of us walked away from that date thinking "OMG that was the ONE". Probably for the best; even writing this, the idea of being woken up by a giant lizard crawling over me is making me shiver.

Now, I'm sure there's a fiscally prudent herpetologist for her out there somewhere on Geek2Geek; it's fair to say, that is not me.  So, back into the wilderness, it seems...

This post originally appeared at 28 Dates Later. Stay tuned as we catch you up with all Willard's disastrous dates so far over the next week.

This is exactly what Willard's date looked like. Photograph: Getty Images

Willard Foxton is a television and podcast producer who has developed documentary films and podcasts for all of the world’s largest broadcasters. He works for the audio production company Novel.