Black Mirror has been going for eight years. That’s almost the whole of this decade, the majority of the… has anyone worked out what this decade is called? If the last time it was easy to name a decade, we were in the Nineties, would that make the following one the Noughties, and this one the… Teenies?

Charlie Brooker and Annabel Jones, the co-creators of Black Mirror, are having none of that. “You can’t call it the ‘The Teenage Years’, that sounds weird,” Brooker tells the New Statesman. “What else do you call it? I’m putting a bid in for ‘The Shitties’, that’s what you can tell your kids in the future. What was this decade for? They’ll go, ‘that’s when it all turned to shit, dad’.”

Brooker has been a cult figure in the UK since the 1990s with his work on shows such as Nathan Barley and Brass Eye, before he started working with Jones in 2000. She was a producer at Endemol (now Endemol Shine), the independent production company that developed the definitive Noughties TV format, Big Brother. Jones was tasked to scout talent to set up new companies under the Endemol umbrella. She noticed Brooker’s work on Channel 4’s The 11 O’Clock Show, which unleashed Sacha Baron Cohen’s Ali G character on the world. He came in for a meeting, and the rest is history. Jones and Brooker have worked together on zombie reality TV satire Dead Set, which is getting a Brazilian remake for Netflix; the various iterations of Brooker’s topical Newswipe and Screenwipe round-ups; and the Philomena Cunk shows.

After nearly two decades of working together, Brooker and Jones’s banter comes across like a pair of siblings after a too long car journey. While they can finish each other’s sentences, they also throw ridiculous barbs at each other, and improvise silly ideas. Is it always this much fun to work on Black Mirror – a famously bleak series – together?

“It’s the love of the show that keeps us doing it,” says Jones. “The thought that there’s an interesting angle or observation or behaviour – or just something in the ether – that hasn’t been dramatised by anyone else, that we should do.”

“If we get invited to an awards ceremony,” Brooker adds (the series has won a whole slew of awards, including two BAFTAS and seven Emmys), “I still feel like I’ve been invited by mistake, and there’s all these like grown-ups there who make programmes, who do it properly. It sounds like I’m describing imposter syndrome there, but it’s not quite that, because I think that we do a good job. It’s just that it is a bit weird to suddenly find yourself three-dimensionally, physically, in that sort of room, it’s quite odd.” 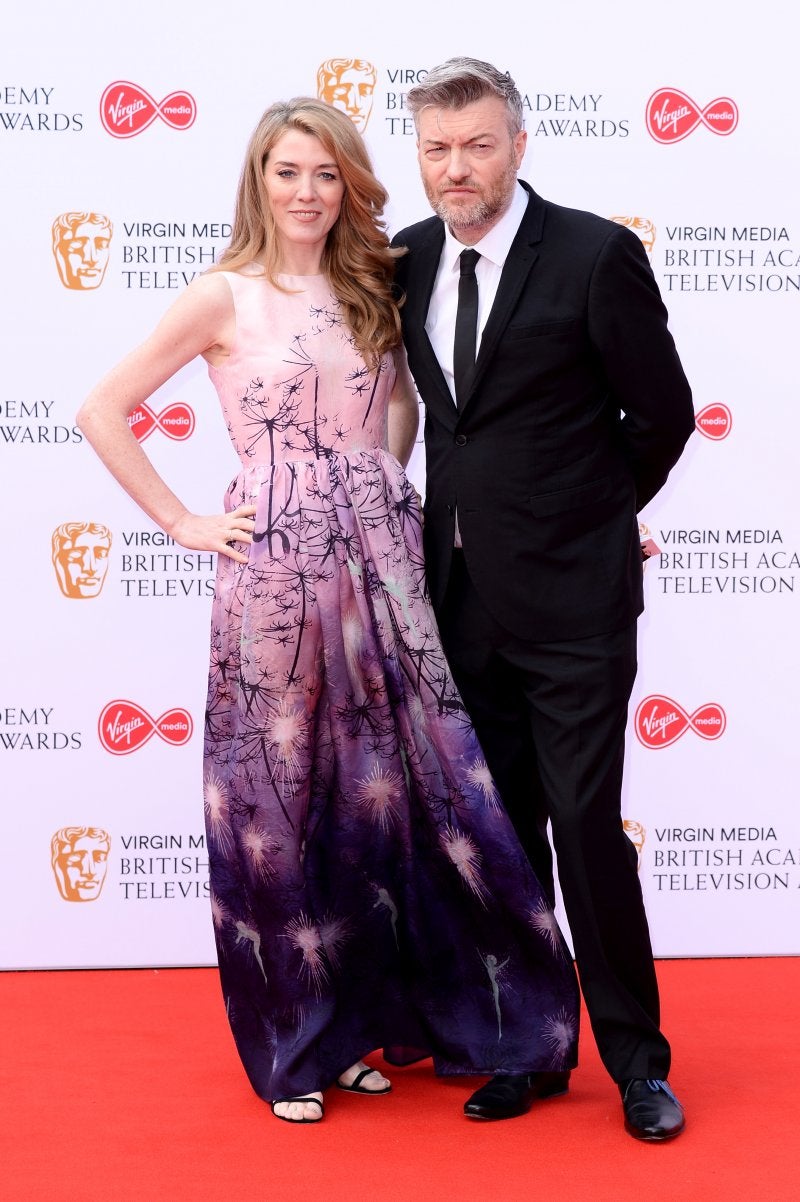 Brooker and Jones at the Baftas in May. Credit: Getty.

The global success of the show means that calling something “a bit Black Mirror,” is fairly standard these days, almost a cliché. What does it feel like to make the show that defines an age? While the turmoil of the last few years been “fruitful for the show,” Jones says, and “it’s flattering that the term has entered the lexicon. Well, that’s usually flattering. At the same time, it’s a bit depressing…” Brooker finishes her sentence: “In terms of what it means for civilisation, well, it is a bit depressing, yeah.”

The demands of making Black Mirror for Netflix over the past few years means that Brooker hasn’t had the time to make his end-of-year Wipe show for a few years now, a fact that his fans mourn. Another maker of Noughties satire, Armando Iannucci, wrote in the New Statesman of his reluctance to revive The Thick of It because politics had already become more “alien and awful” by early June 2016 (he was writing pre-Brexit and Trump!). In a similar vein, Brooker wonders if his own turn-of-the-century creation could cope with today’s news cycle. “I was doing topical comedy shows for a lot of the last decade,” Brooker explains. “It’s quite a relief for me not to be doing one at the moment, because the news, Donald Trump, it’s hard to parody.

“In a very polarised era, you are even more likely to end up preaching to the converted,” he adds, “because half the audience is going [puts on a very Screenwipe voice], ‘I’m not listening to you if you’re a Remainer, die!’ So you end up becoming more and more entrenched in your own position. I think the Wipe shows were pretty balanced overall, which they had to be… why have I got on to a show that no longer exists?”

When later asked for comment on the existence of Newswipe and Screenwipe, Brooker says: “That doesn’t mean I can’t bring them back any time.”

So what does Black Mirror season 5 have in store for us? Brooker describes the three episodes in detail: “Episode one, ‘Striking Vipers’, is a relationship story. Two estranged college friends reunite in later life, triggering a series of events that could change their lives forever. There’s sort of a love triangle going on. It’s quite an unusual dilemma, at the heart of it.

“The next episode, ‘Smithereens’, is set very much in the present day. A cab driver has a day that rapidly spirals out of control. It’s a claustrophobic thriller that also crosses the Atlantic, somehow. I think that, hopefully, it feels pretty timely. There’s a rant that’s a bit Screenwipe, a bit “what if phones, but too much?” That one stars Andrew Scott and it’s a bit of a nail-biter. A knuckle-clencher.

“The last episode of the three, ‘Rachel, Jack and Ashley Too’, is more playful. There are quite a few dark and satirical elements going on there, in terms of the music industry. It’s about a teenage girl who idolises a very famous pop star, played by Miley Cyrus, and the girl is given a device that will in some way bring her closer to her idol. She finds out that Miley’s character doesn’t lead a totally charmed existence.”

With season 5 due to appear on Netflix screens in early June, is it too soon to ask if there’s going to be a season 6? While neither Brooker nor Jones can confirm that there will be another round of Black Mirror, “it would be nice to do more, as there are certainly more ideas,” says Jones. Brooker suggests that an episode could be set in a kitchen – his kitchen. His Alexa’s unplugged at the moment to make way for another, more essential piece of tech: the coffee machine. “Coffee, in a Darwin-esque fight, won out,” he says. “Alexa… died. So, somewhere, there’s the soul of an Alexa, screaming into a void [puts on a very Screenwipe voice]: ‘Is there no one there? I miss you! Come back!’ And I’m just there, drinking coffee.”