I was eight years old then, and for eight years, my parents had successfully talked me into believing that our TV had no TV channels – we “just” had cartoons and Disney movies on VHS.

I suppose it was very handy for them, and helped by the fact that neither of my parents actually watched much TV, either. If I wanted to watch Mulan for the 769534th time, I would ask them, and they would put it on. (If they said no, my sister would be there to help re-enact the best scenes). Simple. I never gave too much thought to the TV listings magazine they subscribed to.

But this meant that, in the summer of 2001, the televised phenomenon of the first French big-audience reality TV show, Loft Story, completely passed me by.

From Serial to Making a Murderer: can true crime as entertainment ever be ethical?

Why Ted Lasso is the most overrated show on TV

Loft Story followed 11 single young people living in a villa equipped with video cameras. Sound familiar? The name was a pun on “love story” and a “loft”, because the participants lived in un loft (bear in mind that this is France in 2001, when wordplay on English words was still considered edgy and transgressive).

Every week, two participants would be nominated to leave the show, and the audience would vote to determine which one. At the end, two would remain and win 3 million francs, which should be used to “buy property” – a concept which, I am fairly certain, would be a fantastic success if rebooted in 2018’s United Kingdom.

Adapted from Big Brother, the show ran for two seasons, from April to July 2001 and then again in 2002. But it’s the first season everyone in France (whose parents had not lied about TV channel access) remembers.

On day three, the show’s resident “bimbo” Loana had sex with Jean-Edouard, the “flirty DJ”, in the villa’s pool. The scene did not air in full – the channel, M6, only showed a passionate kiss. But the internet was enough of a thing (in 2001! in France!) by then for the video to leak and go viral. 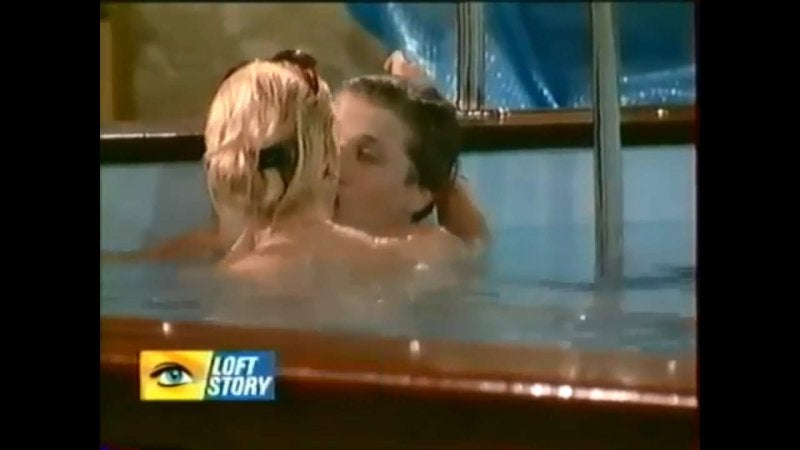 I never watched any of it, but many of my friends did. At school, people talked about what had happened on the show the previous night.

My friend Julien, who was eight then too, recalls the scene: “We could see them kiss in the pool. It was shocking, intriguing. We were starting to learn what sex was, so we would obviously speak about it at recess.”

Apart from the saucy pool sex, this show is memorable for its nothingness.

“They did nothing,” remembers Julien. One contestant is apparently only remembered for asking “who just farted”.

Libération newspaper wrote in its cynical recap that at some point, one of the contestants washed the dishes. “Loft Story: no one likes it, but everyone’s watching,” the article concluded.

The show was widely criticised for its “voyeuristic” concept and its “near pornographic” content. A TV producer wrote an op-ed in Le Monde regretting that some of his colleagues had betrayed their pact never to air such “trash TV”. Protesters even tried to stop it filming, demonstrating against “criminal TV”.

Loana won, alongside a man named Christophe. Because this was France in 2001, and because France is still a deeply misogynist society today, Loana has been regarded ever since as “the girl from the pool”.

She has spoken openly about her struggles with money, alcohol and body image.

Unthinkable today, the show was big enough for the victory celebrations to be held on the Champs-Elysées, with VIP guests including Jean-Paul Gaultier and Geri Halliwell (why? We will never know).

Le Parisien newspaper wrote at the time: “What a party! (…) On the Champs Elysées, it was like living Jacques Chirac’s 1995 presidential victory again, or the highest hours of the World Cup.”

France had won the World Cup three years earlier, in 1998. “Not having TV channels”, I had missed that, too. But thankfully, France won again this year, so I got to watch it (It was okay, I guess).

I can’t help but wonder what a 2018 version of Loft Story would look like. Going by the tameness of this year’s series of its British successor Love Island, there would probably be just as much fuss over pool sex, but I like to hope Loana wouldn’t be mocked for it. In any case, I’m not so sure I’d want to watch.