Highly addictive poolside psychodrama Love Island has returned to ITV2 this week, for its fourth year running. And already the much-anticipated reality show – which showcases beautiful people doggedly pursuing monogamy and drinking from conspicuously branded water bottles – is causing a crisis among its viewers.

High-profile journalists, including BBC Breakfast and Match of the Day 2’s Dan Walker and BBC newsreader Tina Daheley, tweeted that more people applied for Love Island this year than for Oxford and Cambridge. “What is happening to us?” asked Walker, punctuated with three distressed emojis. 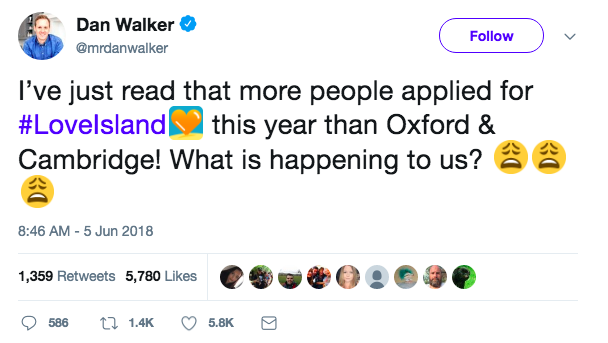 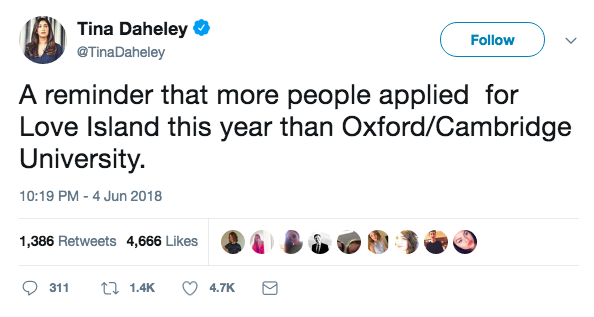 More than 85,000 people applied to be on this year’s show, compared with the 19,000 people who applied to do an undergraduate degree at Oxford and 18,000 Cambridge applicants, by last count. So Love Island attracted more than double the number of Oxbridge hopefuls. Yes, the UK’s most popular reality TV show, open to anyone 18 and over, attracted more wannabe stars than two universities with super-restrictive admissions criteria.

Before we get to why this is such a ludicrous comparison, it’s not even an original ludicrous comparison. Last summer, student news site The Tab was the first to point out – in a humorous rather than judgemental piece – how much more competitive applying to Love Island was than Cambridge.

“In 2017, Love Island got over 80,000 applications,” it reported. “In the same year, Cambridge received 17,171 applications from hopeful sixth formers. This makes Love Island entry almost five times more competitive, with a much lower success rate, too.”

Jumping on this observation, MailOnline ran an article last July headlined: “Revealed: You’re more likely to get into CAMBRIDGE UNIVERSITY than on next year’s Love Island as thousands flock to apply for the show”.

Yes, the contrast – gowns and pallid complexions versus tiny trunks and tans – makes a catchy headline (hawk-eyed readers will note that I’m doing the same cynical thing with this very article…), but rehashing this obviously silly comparison as if it’s an indictment of our society is loaded with snobbery.

The implication is that our country’s gone to the dogs if more young people value being filmed in glossy swimwear than getting their nose into some Latin. That somehow Oxbridge with its posh southern accents and nerdiness is just obviously superior to the path chosen by hot bods from around the country profile-building, performing and pursuing a lucrative career.

Of course Love Island’s shallow – it’s kind of the point of the show – but that’s a difficult argument to make against a system whose admissions process has been shown to disproportionately favour white, privately-educated pupils who look and talk a certain way for so long. How is the luck of being born conventionally attractive worse than the luck of being born to rich parents?

As numerous people have pointed out online, Love Island is a free eight-week summer holiday with a potential £50,000 cash prize (and they even get paid a bit for pausing their jobs to participate), whereas students leave university with average debts of £50,000. Add to that the guaranteed job prospects for anyone who wants to make it as a TV personality, fitness instructor or model, and it’s not a particularly baffling decision to apply.

The wail about Love Island being more popular than Oxbridge says more about those it comes from than modern Britain.