Not many writers come with lives as interesting as their books, for all that literary biography was a major industry in the second half of the 20th century. Yet the story of Muriel Spark is as singular as any of her strange, mordant novels, and frequently just as fascinating. You know where it begins (genteel Edinburgh) and you know where it ends, too (a looming house in Tuscany shared with a companion called Penelope). Somehow, though, the narrative tension remains. What will she make of herself, this young woman with the prim voice and a certain taste for hats? Will she escape into the light, or will darkness swallow her up like a pair of old blackout curtains?

In The Many Primes of Muriel Spark, (9pm, 20 June) a documentary marking her centenary, Kirsty Wark took us smartly through the novelist’s several reinventions, pausing only occasionally to wonder at her restless bravery, those techniques for survival that must sometimes have seemed to others like nothing so much as casual cruelty. (Spark, who endured at least one nervous breakdown, and her son Robin, born when she was just 20, suffered an estrangement whose roots may be traced to her decision to leave Africa in 1944; Robin remained there until the war was over, and would eventually be brought up by her parents.)

Bolstered by talking heads a cut above the usual – William Boyd, AL Kennedy, Ali Smith – Wark also received some help from Spark herself, who appeared, half monstrous and half endearing, in clips from old BBC interviews. Even as you marvelled at her vowels, her clothes and, above all, her glasses – frames as big as TV screens – it was her clarity of tone that stayed with you. Brisk as frost, she struck me at first as unexpectedly frank. (“I wanted plenty of sex, plenty of fun,” she said of her marriage to Sidney Spark, a man she knew hardly at all when she went to live with him in what is now Zimbabwe.) But in truth this was a pose; a clever bulwark against further questions. 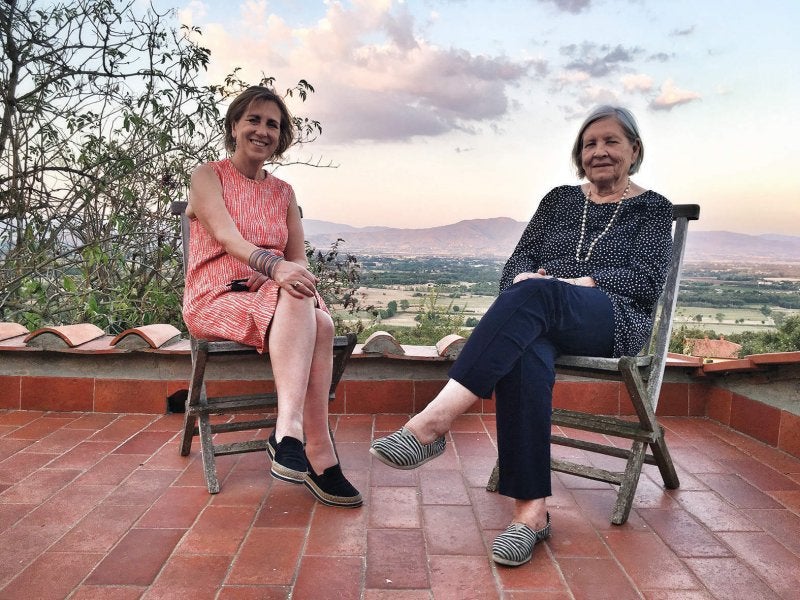 Kirsty Wark meets Penelope Jardine, with whom Spark spent the last 30 years of her life

Wark had a scoop of sorts, in the form of Penelope Jardine, the artist with whom Spark spent the last 30 years of her life, who appeared on camera for the first time. Was Jardine’s briskness learned from her dead friend, or was this something they shared from the start? Either way, it was bracing to hear her tell her cajoling interviewer that Spark had seen her initially only as “someone who could drive a car and cook an egg”; that there are times when being the keeper of the Spark flame is a grim burden (“I feel like blowing it out sometimes”); and that, no, the two of them were not lovers (“I know what you’re asking,” she said, hearing Wark use ten words when one would have done perfectly well). In these days when people talk and talk, and yet seem to say so very little, there was something almost exhilarating about this. Muriel and Penelope. Penelope and Muriel. Somehow, I understood, without ever being told.

And now to Snatches: Moments from Women’s Lives, a series of 15-minute monologues “curated” by Vicky Featherstone, the artistic director of the Royal Court (10pm, 18-21 June). Not only were they on the stagey side, they were also on the joyless side, being issue-driven rather than character-led (two of eight were about rape, which seemed a bit much to me). Still, one at least shone out like a beacon: “Bovril Pam” by Vicky Jones, in which a young secretary (Jodie Comer) does little more than describe in exquisite and crystalline detail her first orgasm (it was set in 1961 when, thanks to the church, one’s parents, one’s menfolk and one’s consequent shame and ignorance, female orgasms were rather thinner on the ground than now).

Amazed that both writer and actor had managed to capture something so mysterious and inexpressibly wondrous, I watched “Bovril Pam” twice, and both times it struck me as sublimely accurate, and marvellously daring. People drone on about so-called female taboos, the nasty old menopause being the current favourite. But how little they ever say about this: the way that our bodies, if only we feel free to let them, don’t only work against us, but for us as well.

This article appears in the 20 Jun 2018 issue of the New Statesman, Conservatives in crisis