Despite steadily gaining popularity over the years, Japanese anime shows are still hermetically sealed and placed to one side whenever we want to discuss the latest trends in pop culture. And it makes perfect sense. It is not conventionally accessible. The animation itself is wild and different, each character prone to over-the-top reactions while carrying emotions through large, colourful eyes.

But every now and then, an anime show comes along that’s so outrageous and wacky, you suddenly realise just how damn smart the artists behind these creations are.

This was the year for Shimoneta: A Boring World Where the Concept of Dirty Jokes Doesn’t Exist. Yes, that’s the full title. Shimoneta takes place in a dystopian future (don’t they all) where the environment doesn’t look half bad, and closely resembles an urban utopia instead. In fact, as you can probably guess from the sentence-long title, the series takes place in a reality where bad jokes and innuendos are completely banned, made sure by the constant monitoring of citizens’ speech and actions through wearable bands. I’m glad someone finds a use for wearable tech, even if it is repressive and totalitarian.

You know you’re in for a treat after absorbing the first few minutes. Our protagonist, Tanukichi, a healthy teenage boy, is on the train to school, which has a reputation for teaching sound morals – whatever they may be in this repressed future. Here, he sees a fellow schoolmate being wrongly accused of assault against a female passenger. He steps in to call her out, only to have her turn her accusation on Tanukichi in full view of the morality police on the train platform. 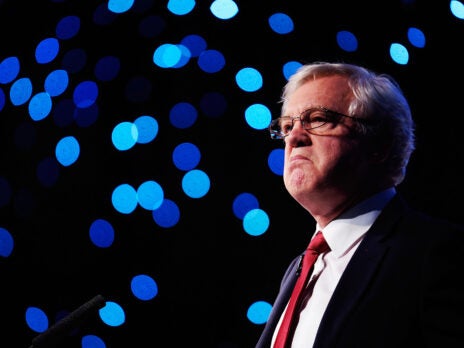 Thankfully, the locally-known masked “pervert terrorist” Blue Snow shows up, offering double entendres and a confetti of graphic material to the well-behaved public, allowing our hero to escape and make his way to school as normal.

Tanukichi fends off an overly-passionate classmate from under his desk, who lasciviously asks about reproduction, by commanding her to “read the textbook”. But his attempts at being sensible at school are thrown in the air by Ayame, a girl who quickly reveals she’s Blue Snow, the pervert terrorist. She carries a flip-phone-like device that allows her words and actions to evade the surveillance of the morality police. This helps both characters to create SOX, a group that spreads material throughout the city to help people fight the repression to which they’ve unknowingly fallen numb.

I know what you’re thinking: it all sounds insane. Don’t worry, I feel the same way. But the show confidently uses the sounds of bells and whistles to tune out the actual words being said, making it work like few other comedies.

But the reason why Shimoneta is so compelling is the fact it works as a crackling satire. The Japanese population is decreasing, with low birth rates and an alarming crisis in relationships among the young adult population. The problem is so worrying that government ministers have come out and said the country should accept more asylum seekers and refugees as a way of ensuring a healthy state of demography. Last year, the country accepted a mere 11 asylum seekers from a record pool of 5,000 applications.

Whereas sad Joaquín Phoenix succumbed to falling in love with an operating system in the film Her, the anime Chobits was first to tell the story of a similarly lonely guy falling for his female robot. Shimoneta breaks against the global conversation about what will happen to humanity once robots reach a greater level of sophistication, by answering that people have to get back to doing what they do best: fall in love with reckless abandon and make jokes about it. But Japan is not alone in this, as the demography crisis has started to spread.