Something terrible happened in Britain last night. Some ice cream melted, and then was thrown in the bin. A man with a beard had a strop about it and stormed out of a tent. A woman was the victim of an entire nation’s assumptions that she had done something underhand. The country erupted.

I am, of course, talking about the Great British Bake Off. I’ve tried before to explain why apparently minor events on what is just a reality show about cake cause such upheaval. It’s the essential niceness of the programme – the checked table cloths, Mary Berry’s oh-so-blue eyes, Mel and Sue’s puns, the shots of a lovely garden in the sunshine – that makes even the smallest disruption seem like the worst thing that’s ever happened ever. And so it proved last night.

For dessert week, the fourth episode of the fifth series, the contestants were required to make a Baked Alaska as their final, “showstopper” challenge. If you’re not familiar with this particular confection, it’s a big dome made of sponge and ice cream, covered in meringue. It’s really difficult to make even in the most professional of circumstances, owing to the ice cream’s tendency to melt and ooze out through the cake in a rather disgusting fashion, and the problems caused by trying to cover the whole wet mass in something as unstable as beaten egg whites mixed with sugar. Let’s be clear: nobody likes Baked Alaska. It’s a strange Seventies concoction that’s oddly gooey and firm at the same time. Its repulsiveness is part of the challenge – if you can make it taste nice, you’re a bloody good baker.

It was even harder than usual for GBBO’s contestants, though, as they were trying to produce these monstrosities in a tent, on an extremely hot summer day. The Incident occurred when Diana, a 69-year-old Women’s Institute judge from Shropshire (and GBBO’s oldest-ever contestant) appeared to remove another contestant’s ice cream from the freezer and leave it on the side, where it promptly melted all over the counter.

Iain, a Northern Irish engineer with a ruddy beard like a Viking, lost it when he saw that his black poppy sesame seed ice cream had become a sloppy grey mess. He threw it in the bin and stormed out of the tent, refusing to complete the rest of the challenge. From what we saw on screen, it certainly looked as if Diana had deliberately sabotaged her fellow competitor, destroying his chances of a set ice cream in the time allowed. Twitter erupted in violent condemnation of her, and GBBO’s Wikipedia page was even briefly edited to reflect her new role as the nation’s most hated Ice Cream Melting Supervillain:

Except that she isn’t. In this new Britain where we all have to take sides over some soggy cake, I will proudly out myself as being on Team Diana. No doubt hoping for exactly the kind of drama they have caused, the programme’s editors made it appear as if Iain’s ice cream had been removed from the freezer deliberately, and for ages, hence its liquid state. In fact, presenter Sue Perkins has since confirmed that the ice cream was out of the freezer for 40 seconds, maximum, and that Iain’s subsequent strop was – as he himself said – the result of his own frustration at the difficulty of the challenge. After she saw the way the incident had been portrayed on screen, Diana was very upset, and has now said that she feels like it was “a stitch-up”. 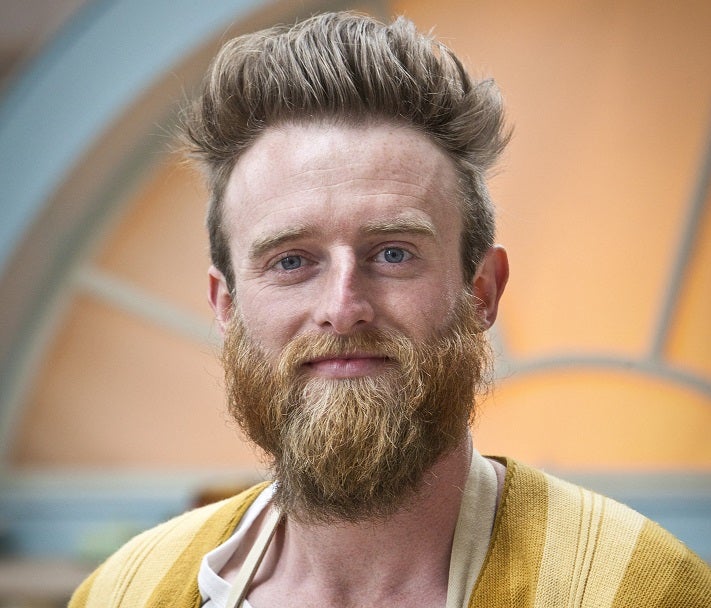 Iain let his passion for cake get the better of him.
Photo: BBC/Love Productions

The fact that Iain was the contestant eliminated at the end of the episode has only fed the anti-Diana sentiment, of course, but it should be noted that nobody made him throw it all in the bin and storm off (as Paul Hollywood said on Twitter, they need something to judge). Another competitor, Chetna, also had problems with the heat and ended up presenting some sponge with ice cream on it, rather than the whole ridiculous edifice, and received nothing but kindness and understanding from the judges. Also, Iain hadn’t exactly covered himself with glory in the rest of the episode, coming 6th out of the 9 contestants in the tiramisu “technical” challenge. As he said himself, when he shamefacedly brought the bin up to present to the judges: “I had some issues with the ice cream and I let the frustration get the better of me.”

Diana herself made a slightly wobbly meringue swan, which was well-received by the judges. But Paul Hollywood had an additional bit of advice for her, telling her not to come up to be judged with her head down anymore.

“You should hold your head up,” he said. “Like a swan would.”

I, for one, hope that she glides, swan-like, through the rest of the competition.

Diana will not be appearing in the Great British Bake Off again, following last night’s controversial episode. The BBC say her departure was due to illness and not the events of episode 4. A spokesperson said:

“The night before episode five, Diana made a decision not to come back. This is not connected in any way to what happened in episode four.”