In the run up to the second half of series 5 of Breaking Bad, AMC released a short, cinematic trailer in which Walter White reads the Shelley poem, “Ozymandias”. “My name is Ozymandias, king of kings”, he growls, “Look on my works ye mighty and despair!” The words, and the gesture, nicely reflect the manic egocentrism of Walter’s alter-ego, the empire-building drug lord Heisenberg. At the same time, it reminds us, as the poem does, that all earthly things will fade, and that in the long run – “chemistry is the study of change” – nobody will be remembered, and nothing will survive.

In the prologue to series 5 episode 14, we are back in To’hajiilee, but not as we left it last week. Instead we return to Walt and Jesse’s first cook, in their beloved RV, which Walter leaves for a moment to make a call to his wife. We see him as a liar in training, explaining that Bogdan is keeping him late at the car wash, but that he’d like to enjoy some “family time” at the weekend. The call mirrors Hank’s heartfelt message to Marie last week. Skyler suggests the name “Holly” for their daughter. Before the opening credits roll, Walt, Jesse and the RV disappear. That first cook represented the beginning of Walter’s material wealth: the shootout in the desert represents its end.

When we return to the present, we see that Hank has been shot and Gomie is dead. The Nazis descend and Walt begs Jack to spare Hank’s life. He reveals that all his money – “80 million dollars” – is buried nearby. When Jack refers to Hank as a “fed”, Walter corrects him: “His name is Hank.” But Hank goes one better: “My name is ASAC [Assistant Special Agent in Charge] Schrader, and you can go fuck yourself.” Jack kills Hank, but not before he tells Walter that he is the smartest person he knows, but still too stupid to realise Jack’s mind was already made up. Walt collapses to the ground, knees first, and the camera forces us to peer into his crooked dank maw: Vince Gilligan is the Edvard Munch of New Mexico. 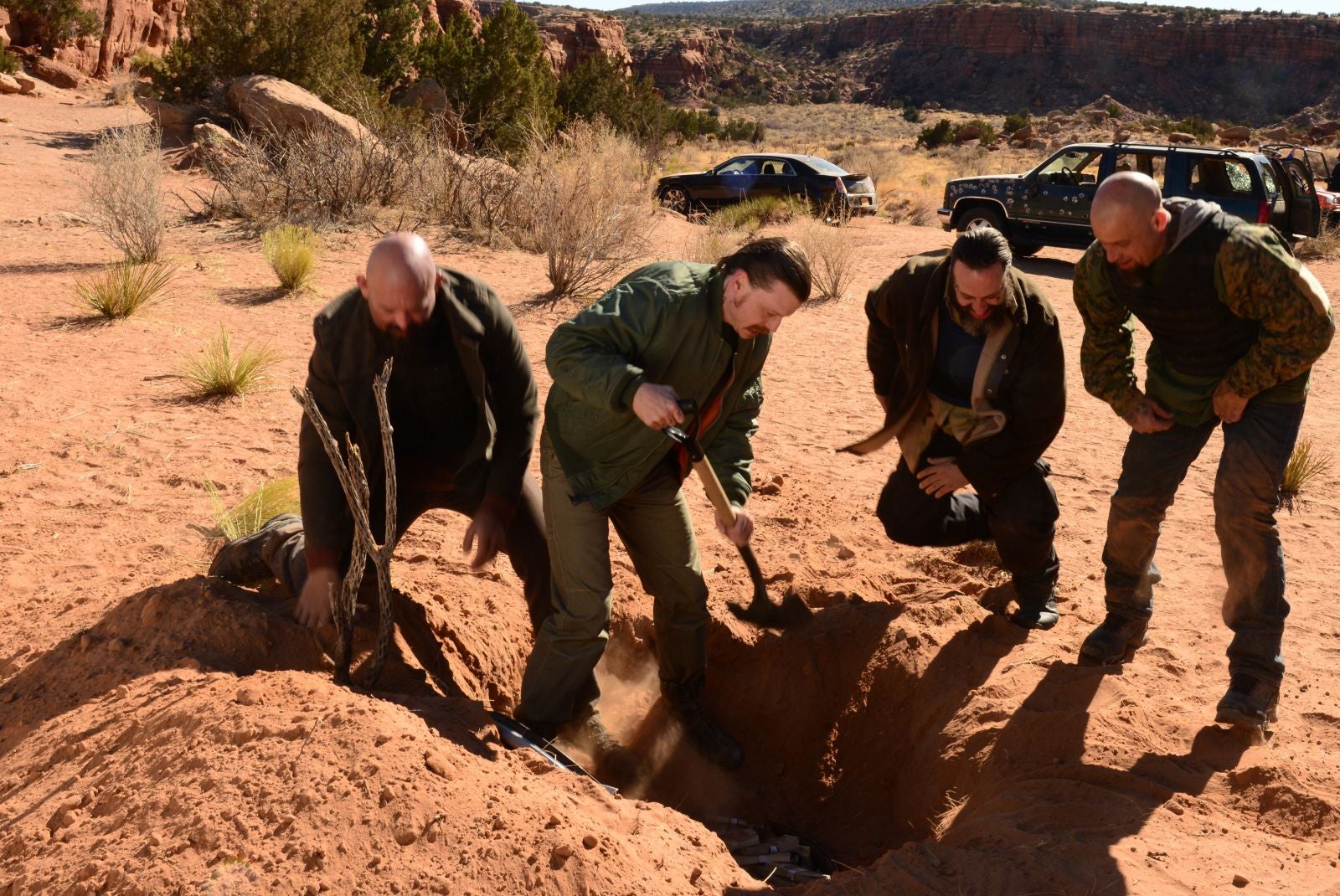 Todd is clearly shaken by seeing Mr White betrayed. The rest of the Nazis load up Walter’s fortune, and replace the hole in the ground with the bodies of Hank and Gomie, giving a grim new significance to the coordinates pinned on Walter’s fridge. Jack decides to settle with Walt by leaving him a single barrel of cash, insisting they shake hands (zoom in on the swastika) to confirm that their business is settled. He chastises his men when they complain about the loss: “Jesus, what’s with all the greed? It’s unattractive.” But Hank’s death has sent Walt spiralling. He spots Jesse hiding under the car in which he and the DEA duo arrived, and orders his execution. Todd, however, has a reason to keep Jesse alive. He needs help cooking, and we later see a badly beaten Pinkman emerge from a hole near the aircraft carrier where the Nazis go to work. By now the episode has taken on the feel of a horror movie, as Jesse shuffles along, one eye closed, attached to a metal cord. As he was dragged from To’hajiilee, Walt tried to hurt Jesse for what he sees as his disloyalty (snitching, after all, is frowned upon by kingpins): “I watched Jane die,” he tells him.

Later, while Walt purchases a second hand pickup truck from an elderly Navajo man, Marie shows up at the A1 Car Wash, convinced of Walter’s arrest and the forthcoming conclusion of the family’s troubles. She forces Skyler to tell Walter Jr everything. Unsurprisingly, he thinks it’s all “bullshit”. When they drive baby Holly home, they find Walt packing clothes for the four of them. Skyler is confused, and asks where Hank is, but Walter cannot even begin to formulate a plausible falsity this time. “I negotiated…” he falters. As “Flynn” goes to pack, the camera cuts behind the house phone and a block of knives on the kitchen counter. It’s the classic conundrum: which to pick up.

Skyler opts for the weapon and a tussle ensues. “What are you doing!? We’re a family,” howls Walt, as his son protects his mother and he realises the position he has put them in. I’m going to confess that I was so tense during this scene that I drew on myself. All I can say is it’s a good job it was a uni-ball I had in my hand at that moment and not a knife, or Mr White would have another body to add to his count. Walt steals baby Holly and does a runner. Skyler follows him out into the street and drops, dotted in her husband’s blood, to her knees – mirroring Walt’s own reaction to Hank’s death at the start of the episode. 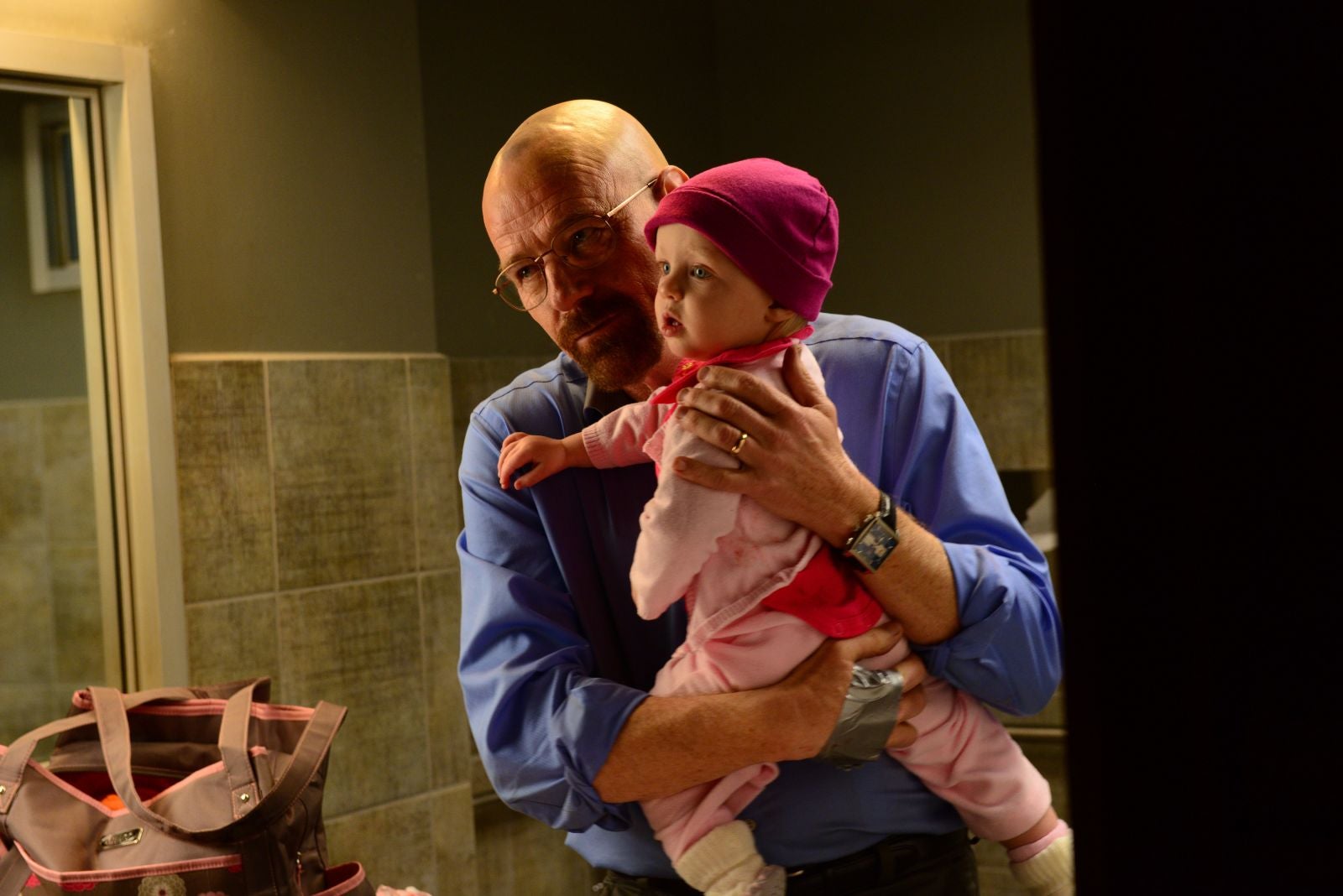 Walter makes off with his daughter, Holly. Image: Ursula Coyote/AMC.

With gaffer tape wrapped around his hand, Walter changes Holly in a public toilet. On cue, the baby begins to call for its mother (Emmy contender?) Back at the house Skyler and Marie are surrounded by police officers. When Walter calls, his voice is pure Heisenberg. What he says is staggering: “Tow the line or you will end up just like Hank,” he tells his wife. It is his acquisitive, remorseless and desirous self that screams, “I built this, me alone, nobody else!” reducing the family to the individual and compounding the fact that he has no one left. The words and the voice do not appear to match the image of a man weeping heavy tears as he prepares to give his daughter away, using a fire engine as a kind of escrow service. At the end of the episode, Walter disappears inside Goodman’s friend’s red Primavera of no return: diminished, deserted and lost.