Last night’s episode of Breaking Bad was light on dialogue, heavy on artillery. In the prologue Lydia whines about the colour of the crystal meth Todd is cooking. “Blue is our brand,” she explains. After she leaves the rusty hanger where the Nazis – I’m just going to call them Nazis – have been busy getting their product up to 76 per cent purity (“That dude who looked like Wolverine, he couldn’t even crack 70”), Todd reminds us of his creepy, adolescent chivalry from “Buried” and rubs his thumb against the lipstick marks Lydia has left on her mug of tea. Yikes. Todd then receives the call from Walt that closed last week’s episode, asking for his uncle’s help: “Just one target, not currently in jail: Jesse Pinkman.”

Hank and Gomie rail at Jessie – “Timmy Dipshit” – but are intrigued by his plan to corner Walt where he really lives. First they fake Jesse’s death using a packet of gooey supermarket meat and trick Huell into thinking Walt’s been on a killing spree, and that he’s next. Using the bare information they have they trick Walt into revealing the location of his buried barrels of cash. Cue a very green-screen road race out to To’hajiilee, the Indian reservation where Walt and Jesse first cooked and where the White family treasure is buried, along with a series of dopey confessions from Walt: “Remember when I ran over those gang bangers!” etc. etc. 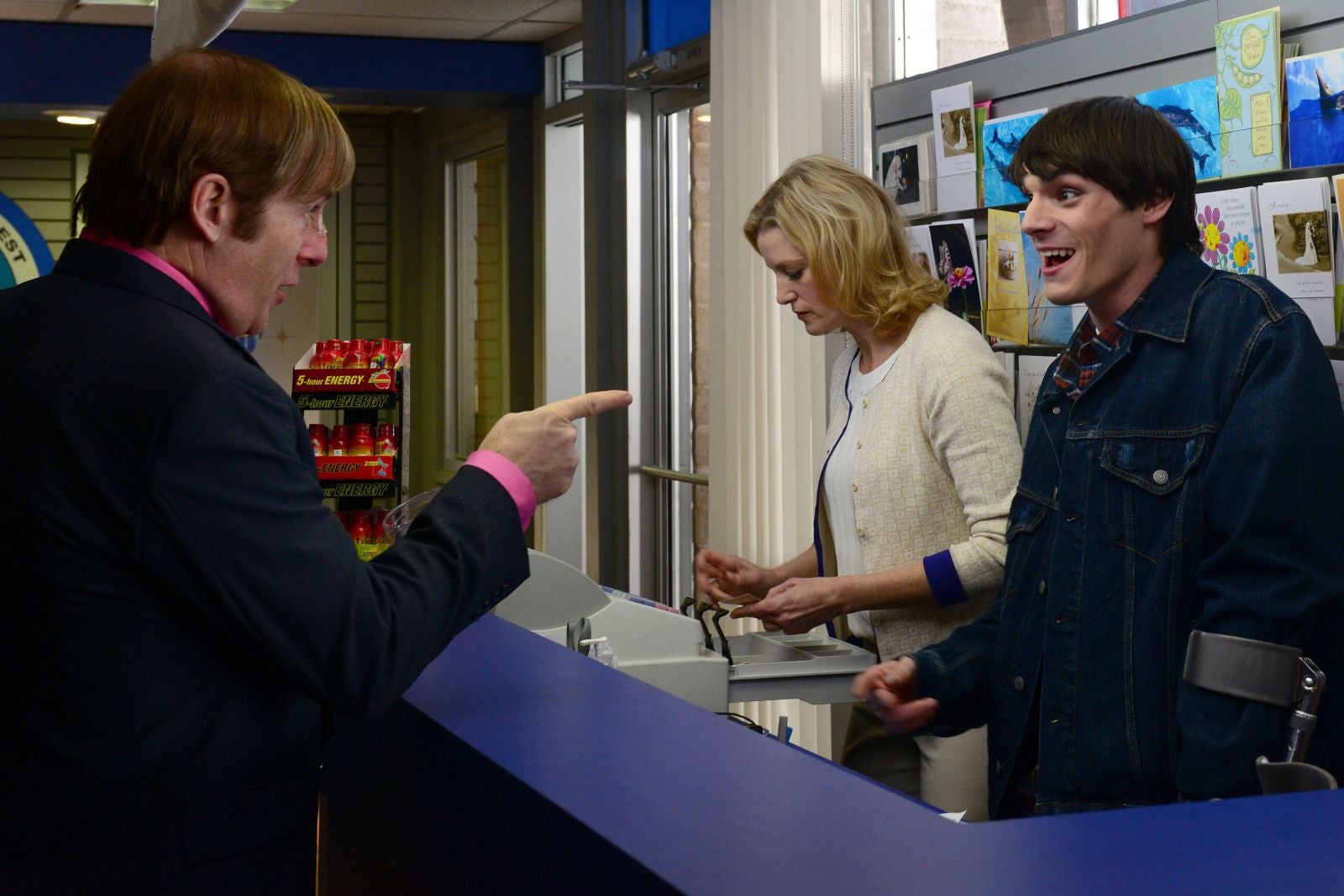 “You’re the guy off our billboard!” Photograph: AMC.

Meanwhile Walter Jr is learning the family business, taking cash and telling people to have an A1 day. There is a priceless moment when Saul approaches the counter, battered, swollen and deflated, and Walter Jr is overwhelmed by celebrity. “You’re the guy on our billboard!” he shrieks. “Better call Saul,” Goodman obliges. Just at that moment Walter – I think purely for the comedy value – appears at the door and looks utterly flabbergasted. Saul, as ever, makes a classy exit: “Don’t drink and drive kid, but if you do, call me…”

Walter’s plan to have Jesse killed shows just how corrupted his definition of “family” has become. “Jesse is like family to me,” he says, explaining to Todd’s uncle Jack that he wants a quick and painless hit. (Great response from Jack: “Don’t skimp on family, that’s what I always say.”) Walt attempts to lure Jesse by showing up and Andrea and Brock’s house, but Hank intercepts the phonecall and puts a stop to the plan: “Nice try, asshole.” 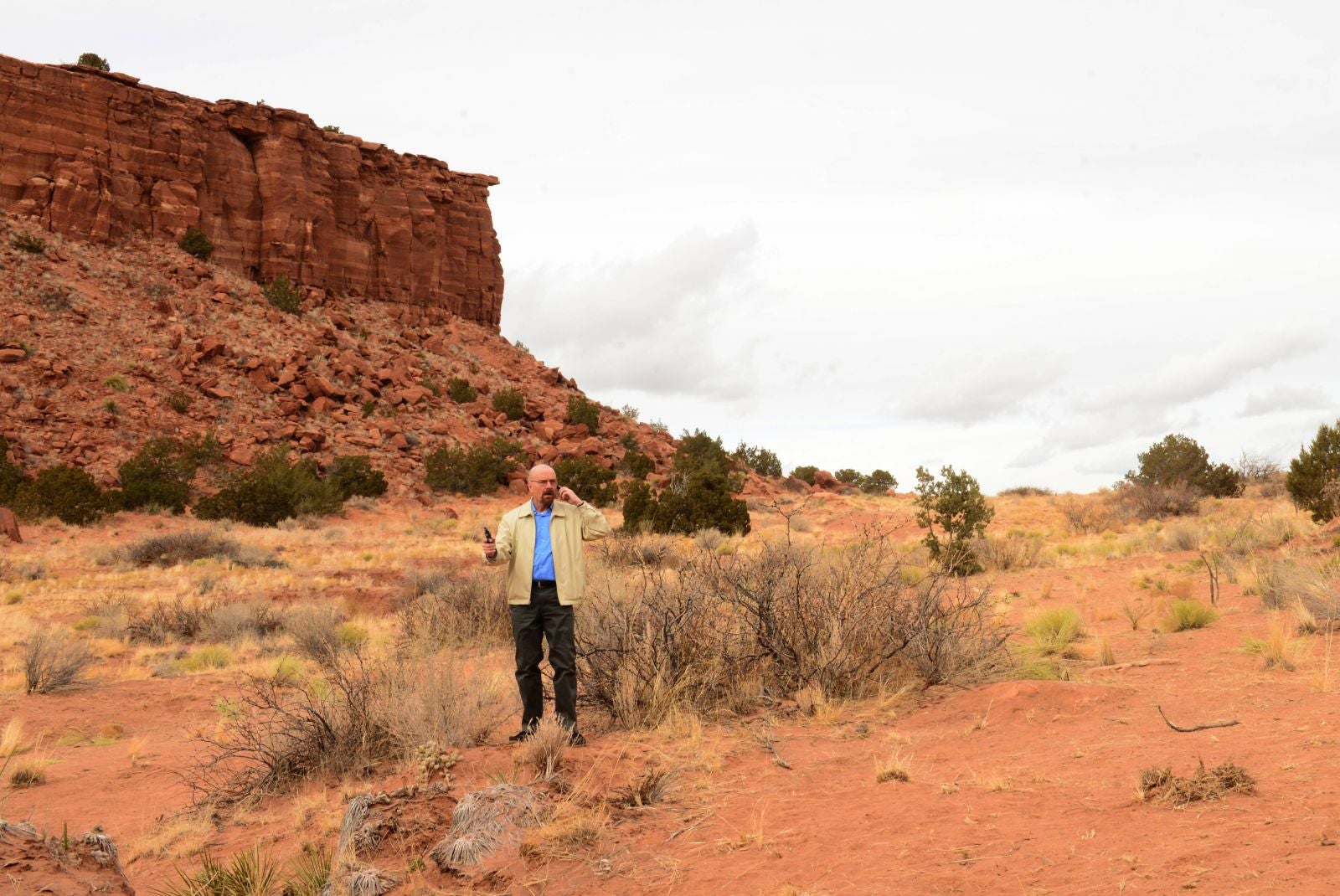 To’hajiilee – not Breaking Bad’s equivalent of yippee-ki-yay but an Indian reservation. Photograph: AMC.

The final ten minutes of the episode became a protracted showdown, first between Hank, Gomie, Jesse and Walt, then between the four of them and the Nazis, who show up despite Walt’s telling them not to come. Hank’s phone call to Marie was a klaxon call to herald his demise, but I’m not so sure… After some of the worst misses in television history, nobody has been hit and everything is to play for. I thought at least Gomie would have taken one to the shoulder, but the bullets keep flying, and Walt and Jesse are caught in the firing line.