It’s tempting to introduce Laverne Cox as ‘the star’ of Orange is the New Black, the latest hit series from streaming service Netflix. Although she doesn’t play the lead, Laverne is that rarest of rarities in Hollywood – a black transgender actor playing a black transgender role. She has been featured everywhere from Time to GQ. Laverne, like the show, has earned mainstream appeal.

As a trans woman myself, I’m particularly keen to control my image – how do you let go of that and give yourself completely to the role?

That’s my job as an actor, I’ve just learned that when it’s time to act that it’s not about me and it’s not about my aesthetic it’s about the character . . . it’s really freeing to be able to not worry about how I look and just disappear into a character, you know? When I show up as myself, there’s a lot of angst and there can be a lot of anxiety particularly on camera about looking a certain way, but as a character I can forget about that so it’s actually really liberating.

Does pushing yourself outside your comfort zone strengthen you?

Absolutely. It’s important to push myself into zones where I’m not comfortable, and I think that’s where the drama is. So I sort of look – at least as an artist – for places where I am not comfortable. And, also, as a human being, as a person who wants to challenge people’s ideas of what it means to be a woman, what it means to be a man, I have to push myself to have those conversations in different ways so I can reach people. I spend a lot of time thinking about how I can construct a message so that people can hear it. A lot of that is about the tone that I take, so that’s a process.

You and many other trans women of colour, like writer Janet Mock and model and designer Isis King, are enjoying great success. Do your experiences of race influence your trans activism?

For me it’s about having multiple voices and multiple stories. I think that Isis, Janet and I just give a different portrait of who trans people are. We all transitioned pretty young and that’s a different experience, we transitioned earlier and we’re all working class and that’s a different experience how those identities intersect. I think there are a number of trans women of colour who have seen their stories reflected in Isis or Janet or me and I think that’s important for those people to be able to look at mainstream media and see people who look like them and have stories that are similar to them whether they’re trans or not.

I grew up in Mobile, Alabama – and Alabama, as you probably know, was one of the big places that the civil rights movement happened. Alabama was sort of ground zero for a lot of civil rights struggles in the 50s and 60s in America. So I grew up with an understanding of that, and politicised around race and so that’s surely informed how I approach being a trans person politically, definitely.

How do we teach minorities to believe they deserve and can achieve more?

I was born working class with a single mother, we didn’t have a lot of money but my mother was a teacher and she valued education. So I always say to get an education, and that may mean different things – for me that was a college degree – but to get an education that involves thinking critically and involves having some skills that you can continue to develop throughout your life. And a lot of my journey has been about not giving up when people tell me no.

I’m still a student of acting, I’m still a student of activism, I’m still learning. I’m not any more special than anyone else. I’ve just been very lucky and I’ve worked really hard and I’ve had people who believed in me, I’ve been lucky to have had wonderful mentors as an actor. My mother let me pursue my desire to take dance lessons as a kid – I think that saved my life. So I would say take something that you are passionate about, really passionate about, and that you’re good at too, and then get really, really good at it. And train. And study. And work really hard.

Does your background push you to work harder then?

My mother made me aware that, because I’m black, because I’m trans, I totally have to be better than everybody else (which is a lot of pressure to put on myself) and I have to be exceptional. I know I’m probably going to be told “no” a lot. So yeah, it does motivate me. And I feel like I have a purpose too.

You feel part of something bigger than yourself?

Absolutely, because there’s no way of knowing how people might respond to seeing me on television or reading something that I have written. It’s about inclusivity and it’s about authenticity and changing what people might think about trans folks. It’s not about my ego or having a platform to be just fabulous or whatever. It’s bigger than me in terms of the impact too that it can have on folks, when people are inspired to live more authentically and to go for their dreams because they see me going for mine. 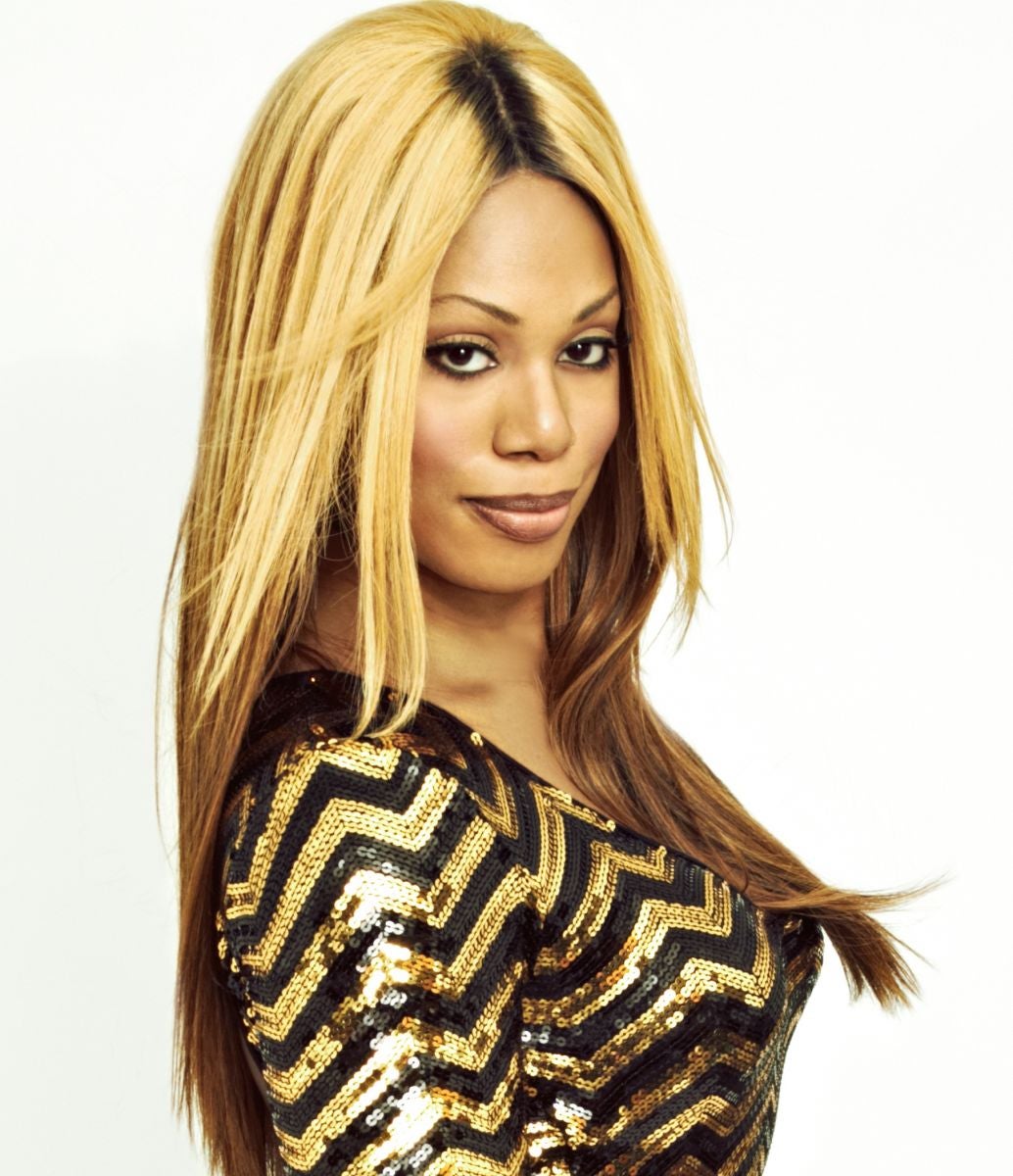 You’re going mainstream. What’s the limit for you?

I don’t believe in limits! I have been very ambitious for a very long time and it’s been really rough being really ambitious and having really big dreams. I don’t think there should be any limits for how mainstream one can go, or how mainstream as I’d like to be. I think what’s been so powerful about this show, Orange is the New Black, is that people are just connecting with these women in human ways. And when we do that, then all those preconceptions and ideas that we can have about a group of people can fade away because like ‘Oh she’s just a human being, she’s like me, she has hopes and fears and insecurities just like I do!’  And that’s universal.

If you could take a pill and wake up tomorrow as an ‘ordinary’ woman, without a transgender history, would you?

I think my history has made who I am and my struggles have made me who I am. I like myself today, I really like myself – and I could cry saying that! Because it’s been a really hard struggle to really like this person in the mirror, but I think that it’s a beautiful thing being trans, I don’t think that there’s anything wrong with it, I don’t think there’s something wrong about me. I absolutely would not change it for the world. If I could have taken that pill ten years ago I would, but I’ve changed. It’s been a lot of work to get there though.

Why do some people have a problem with trans stuff?

I think people have a problem with it because they’re uncomfortable with themselves, about what it means for them to be a man or woman. So it’s “If I was assigned male at birth, does that mean I can’t play with toys that are pink and things that are not seen to be traditionally male?”

The very binary idea of man and woman, it blows it out of the water really. People want to believe gender is something that’s essential, and people repeat these essentialist ideas all the time. “Oh, women do that” and “Oh, men do that” and the reality is that all women don’t anything. We as individuals do what we do, you know, and sometimes that’s informed by gender and sometimes it’s just who we are. And I think all that just makes people really, really uncomfortable because they don’t want to think about who they are.

So what do trans people have to teach the rest of society?

I think we can teach everyone that they can define what it means to be a man or a woman on their own terms. That they can look in the mirror and say ‘this is who I am authentically and I don’t have to be limited by what someone else thinks about me’.

I’ve dated so many men over the years who are so afraid of what people are going to think about them. I’m mainly dating white men in New York City who have all this privilege and they are terrified of losing it, these straight white men, because they don’t want to step out of the box of expectations of who they’re supposed to be.

I literally had a guy tell me that it was totally irresponsible for him to be with me . . . he was saying, ‘I’m white, I’m straight, I’m handsome . . . I’m supposed to have this white picket fence and I’m supposed to have all this stuff, and you disrupt that’. And all that’s about other people’s expectations of who he’s supposed to be, it’s not about who he actually is. So if he could just let go of all that, he’d probably be a lot happier – but then he’d have to question the privilege that he’s been given, and a lot of people don’t want to do that. And I have to say if I grew up with all this privilege, I don’t know if I’d want to question it either.

Who do you admire?

My idol is Leontyne Price; she’s a black opera singer who came to international prominence in the late 50s and 60s. She was just so good at what she did, she was really the first black international opera singer and through her art she really made it better for black opera singers after her. And I’ve always dreamed of doing things through my art that might change things for people who might follow me. I also get a lot of inspiration from Janet Mock – I mean so many people do – she’s just a really brilliant person.

Why are trans people becoming more prominent in public life?

In America, gays and lesbians have made so many political gains and I also think it’s a lot to do with trans folks saying, ‘this needs to happen’ and ‘I want to have access to this, I should have access to this’. Isis saying ‘I want to be in America’s Next Top Model’ and coming out and doing that, and Jenna Talackova competing in the Miss Universe pageant.

This is a generation of trans folk who feel like they should not put their dreams on hold because of who they are… and we’re making political capital out of it, we’re making ourselves be counted. I believed I deserved less than everyone else for a long time and I don’t believe that anymore. There’s a lot of trans folk who don’t believe that now who are saying, ‘I can be out, I don’t need to be stealth to live my dreams’ and ‘I deserve the same things as everybody else’.