The tabloid press has long had a particularly poisonous attitude towards footballers’ lifestyles – especially those who play for England. But the constant whiff of classism in this coverage has translated into a full-on stench when it comes to players of colour.

Manchester City and England midfielder Raheem Sterling has been the focus of this vitriolic obsession over recent years, with the Sun picking apart details of his life like it does with no other player of similar stature.

The latest involves ringing up anti-gun groups to see if he should be banned from playing in the World Cup due to the gun tattoo on his leg: 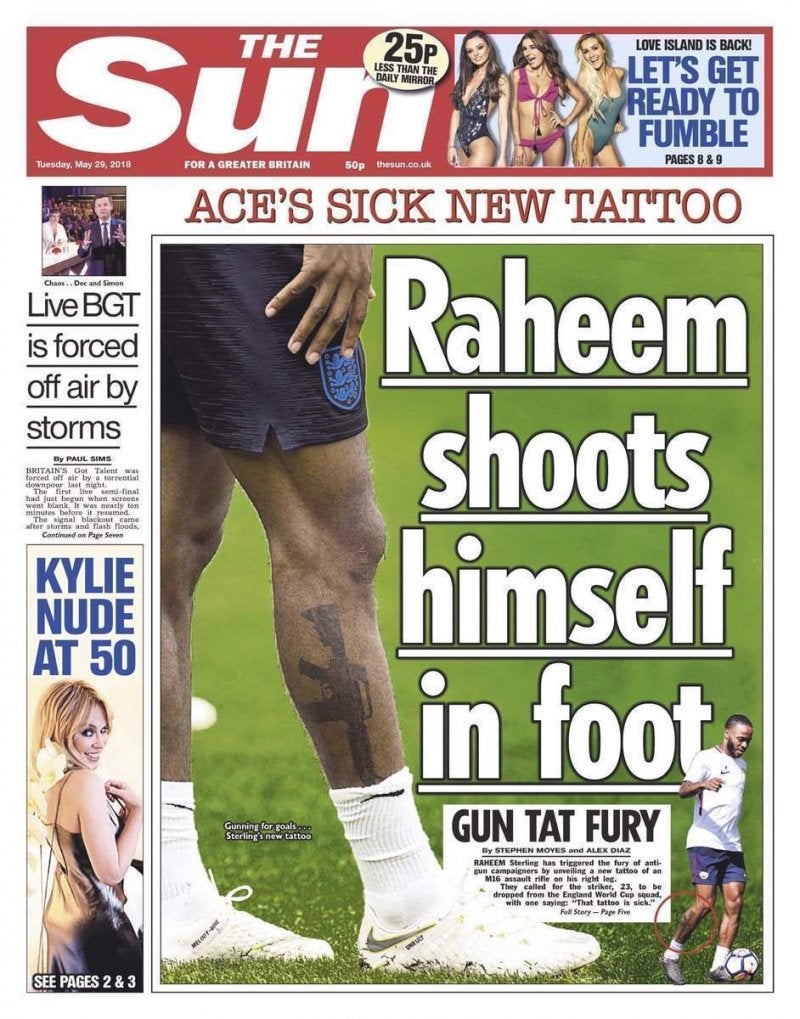 Sterling defended his tattoo’s “deeper meaning” on his Instagram, saying “when I was 2 my father died from being gunned down to death”, and revealing that he “made a promise to myself I would never touch a gun”.

But English newspapers don’t seem bothered with his side of the story when it comes to his personal life – and never have.

Before a Euro 2016 match against Iceland, one broadsheet reported that Sterling had been recalled to play in the match – embedding a ticker to inform readers of how much money he’d earned in the time it took to read the article.

Everyone knows footballers are paid astronomical salaries, but for some reason Sterling’s earnings and spending are constantly a subject for front and back pages.

Here’s a great thread of the worst examples:

[Thread] a selection of times when our national press have chosen to run stories on Raheem Sterling.


The Mirror in 2015 cried “DON’T BE SO GREEDY” from its back page regarding Sterling’s pay negotiations, the Sun labelled him “footie idiot” in 2016. He was “OBSCENE RAHEEM” on the Sun’s front page in 2016 after posting a picture of a sink in a house he’d bought (the splash didn’t say it was for his single mother who raised him), the Daily Star mocked his “FILTHY £50k Mercedes”, he was a called a “love rat” by The Sun when proposing to his girlfriend – and has been scrutinised for mundane things like partying, having breakfast, being photographed with a female friend on holiday (the Sun’s front page: “PREM RAT OF THE CARIBBEAN”), eating at Greggs, shopping at Primark and Poundland, and flying on a budget airline.

Some of the media’s treatment of Raheem Sterling in this country (I’m looking at you @TheSun) is absolutely disgraceful and borderline racist. Absolutely abhorrent newspaper.  https://t.co/CtYWDP5zT6


Sterling can’t win. If he earns or spends a lot, he’s flashy. If he goes budget, he’s cheap and classless. It’s almost as if the majority of white sports writers are uncomfortable with a man of Sterling’s background being entitled to money, power and his own personal choices.