If there were ever a symbol of the struggle between everyday citizens of a repressive state and corporate interests, then Rio de Janeiro’s Vila Autódromo neighbourhood might just be it.

The impoverished community, which has been fighting eviction for years, sits right alongside the Olympic Park.

People here have been living with the threat of losing their homes long before Rio was awarded the rights to host this summer’s Games. The biggest sporting event on Earth only came to speed up the process.

This week, which spells the opening of the Games, the protracted and painful struggle is coming to an end. City officials are doing their utmost to demolish the one block left standing before the Opening Ceremony.

By the time you read this, they may have already done so.

The original Vila Autódromo is reduced to rubble. All photos: Felipe Araujo

The impasse reached a culmination last week, with around 20 families receiving the keys for their new homes built just yards away from where they had always lived. Their future houses, albeit smaller, are a stark improvement on their old ones.

This used to be a community of around 800 families. Now only a fraction of them remains. Most people here gave in to the pressure that comes from not knowing if their home will still be there when they return from work, and were either bought out by city officials, or placed in housing complexes elsewhere in Rio.

“I wouldn’t call this a success story, but a small victory,” says Maria da Penha, one of Vila Autódromo’s residents at the forefront of the struggle to remain. 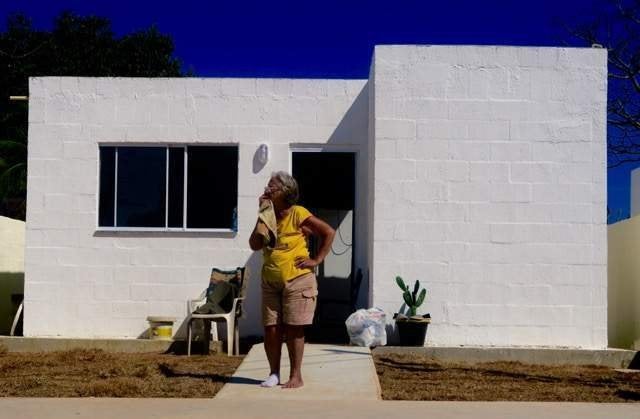 A Vila Autódromo resident standing outside her new home.

When I spoke to Penha earlier in the week, she was in the process of moving into her new home. She won the right to stay on her land, but the community she used to know is no longer there.

“Our neighbours left because they lost hope of seeing this community receiving the help it needed,” she says. “The history of this place has been destroyed.”

Rio’s mayor Eduardo Paes has always maintained that the removal of Vila Autódromo is necessary to facilitate access to the Olympic behemoths looming in the background.

Local residents, though, always insisted it didn’t have to be one or the other: there was a way for everyone to stay where they were, while allowing the Games to go ahead as planned.

And here lies the problem with staging the Olympics in Rio. No one I have spoken to since landing in the city last week has anything against the Games. But all, from the less privileged to the more fortunate ones, agree that the country has many other things to sort out before staging an international event of such magnitude. The new Vila Autódromo reduced to a fraction of its original size.

“It’s obscene,” says Matheus Braga, a street vendor. “Public transport in this city is terrible, the health system is terrible, education is terrible. They are performing a total make-up job just to keep the foreigners happy.”

Matheus lives in Tijuquinha, a low-income area not far from the Olympic Park in the west of the city. Across from where he lives is the Itanhagá Golf Course, hired out by Nike for a reported $3m for the whole duration of the Games.

Separating people like Matheus and the affluent Cariocas — as the city’s residents are known — who can afford a round of golf at the exclusive club, is an open sewer. A canal flowing with human faeces and bacteria — and a physical reminder of the government’s disregard for the poor.

“We just look on from the other side of the canal at the foreigners playing golf or polo. There’s nothing else we can do,” says Matheus.

Back in Vila Autódromo there is the sense of a missed opportunity. This was Brazil’s chance to improve the lives of the most vulnerable in society. Instead, communities have been torn apart.

“Vila Autódromo had everything to be one of the greatest legacies of the Olympic Games,” Penha says. “But City Hall’s position from the beginning was that no one would be allowed to stay.”

Since 2009, more than 75,000 people have been relocated from their homes as a result of the Olympics and other major sports projects, including the 2014 World Cup, according to the latest figures from Rio de Janeiro’s City Council. The only block left standing, with a message of protest.

Experts say those who were told to leave had to do so because they were situated on high-risk areas. Locals refute those claims, saying no test of any kind was ever conducted on their land to determine if their homes were in fact in danger. Popular opinion is that it had nothing to do with people’s safety and everything to do with greed.

“Vila Autódromo has always been persecuted by property speculators,” says Sandra Maria, a lifelong resident. “The Olympics only came to exacerbate the problem.”

Also feeling threatened by property developers are the residents of Vidigal, a picturesque favela that sits majestically on a mountain overlooking trendy Ipanema beach.

In spite of rich foreigners flocking to the area to snap up property, here too local residents feel abandoned by those who were supposed to look out for their best interests.

Raff Giglio, a boxing instructor who has two athletes competing at the Games, tells me that, since setting up his youth boxing club in 2010 to keep local kids off the streets, he never once received a call from the mayor or any other official willing to extend a helping hand. The project is 100 per cent dependent on private donations.

“The government only comes to the favela once every four years – when they need our votes,” he laments. Giglio loves sport and feels hugely proud of his two athletes who will fight for the national team at the Olympics. But if it was up to him, the event would not be coming to these shores.

“The Olympics are for first world countries and Brazil is still a third world nation,” he tells me bluntly.

With only a few hours left before the fireworks go off at the Maracanã Stadium on Friday, the hosts are not feeling very festive.

“I had a different idea of what the Olympics were supposed to be,” Sandra says. “I thought it was an event put together to unite people, but in reality these are the Games of exclusion, thought out by the rich for the rich.”

Asked how she is going to experience the event, Sandra gives me a wry smile, before answering.

“How do the poor participate [in the Games]? It’s during the construction of the venues and then as volunteers. The government is so shameless that they put poor people to work — for free.”