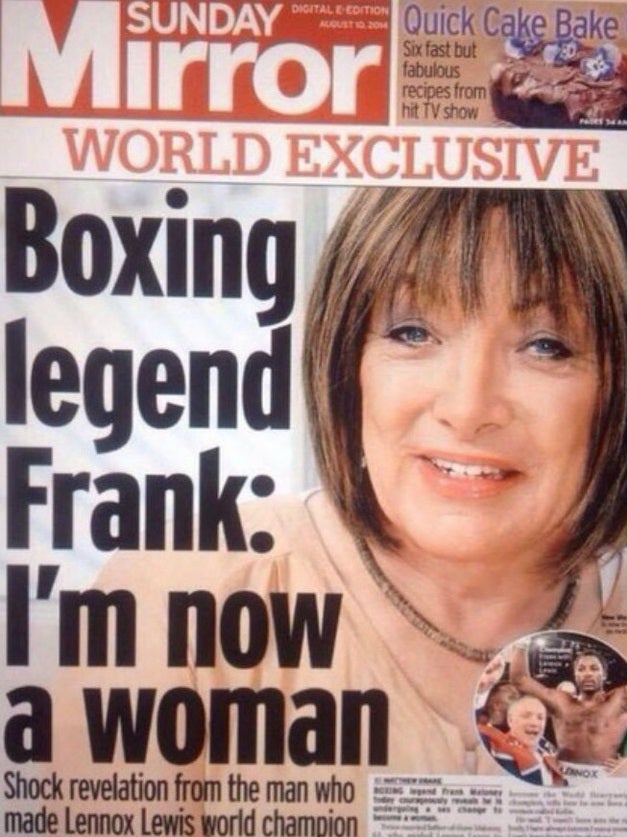 Former boxing promoter Frank Maloney explained in the Sunday Mirror yesterday that he is undergoing gender reassignment and is now living as a woman called Kellie.

She told the paper that she had never told anyone in the boxing world about feeling trapped in the wrong body from an early age. She said:

Can you imagine me walking into a boxing hall dressed as a woman and putting an event on? I can imagine what they would scream at me, but if I had been in the theatre or arts world nobody would blink an eye about this transition.”

When England’s women won the Euros

The success of women’s football is feminist revolution by stealth

Kellie Maloney is now more than a year into her transition, and her openness has drawn unexpectedly vocal support from others in the macho sporting world.

Lennox Lewis, with whom Maloney worked in the run-up to his heavyweight title in 1993, released the following statement:

I was just as shocked as anyone at the news about my former promoter and my initial thought was that it was a wind-up. The great thing about life, and boxing, is that, day to day, you never know what to expect. This world we live in isn’t always cut and dried or black and white, and coming from the boxing fraternity, I can only imagine what a difficult decision this must be for [Maloney].

However, having taken some time to read Kellie’s statements, I understand better what she, and others in similar situations are going through. I think that all people should be allowed to live their lives in a way that brings them harmony and inner peace.

I respect Kellie’s decision and say that if this is what brings about true happiness in her life, than so be it. #LiveAndLetLive.”

Frank Maloney, read your story.. It’s your life, don’t make others stop who you are. Ignorance is the problem of others, not yours.

Crazy the news about my old boxing promoter Frank Maloney can’t get my head around it! Fair play to him for coming out. #BeHappy #1Life

I wish Frank Maloney, now Kellie all the very best. Being who he wants to be after 61 years. Nobody deserves to begrudge him happiness.

Trans Media Watch, an organisation that seeks to help media outlets improve their reporting of trans issues, has said that they are pleased with the standard of coverage:

As you can imagine, we’ve been swamped since the Maloney story broke. We’re pleased with the standard of coverage overall.