Here is a picture of my grandmother Grace with the only child she gave birth to. It really is from another era isn’t it? I’m guessing around 1918. All the kindness of my Nana, as I called her, is here in this old-fashioned frame.

I took it from my mum’s house when she died. She loved it too, but the baby in the picture is not my mum. The baby is Bobby, my grandparents’ son. They weren’t sure my grandmother could conceive, but she did in the end. Bobby died at 14 of diphtheria. The pain must have been immense. I grew up hearing Bobby referred to in hushed tones, only ever thinking of Bobby as a baby. There were no other pictures of him – or none that I ever saw.

The story goes that my Nana wanted or needed another child, and so she and my granddad walked into a Salvation Army orphanage to find another Bobby: a teenage boy. But when they arrived, they heard a baby crying, and on impulse took her home. Adoption was that simple in those days.

That baby was my mother. In the story, as they went upstairs, a young girl was running downstairs, crying. Was that girl my biological grandmother?

My mother always knew she was adopted and would say proudly that her parents didn’t just “have her”, but that they “chose her”. Like many of her generation, she never wanted to know about her real parents, and I wonder if she felt that to do so would have been a betrayal. We now think differently about adoption. I certainly do, because once I had a child myself, I was asked a lot of medical questions about genetic diseases, which I couldn’t answer. 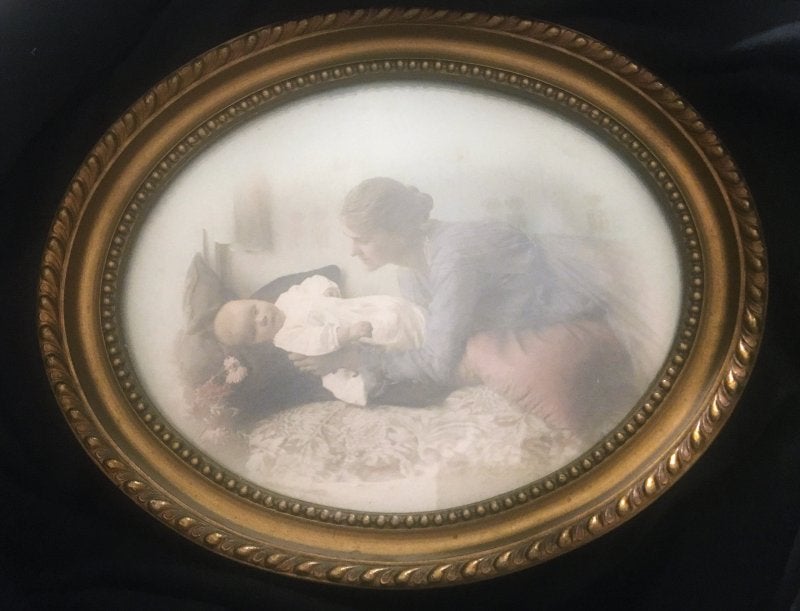 My childhood was what would now be described as “chaotic” in parts. My mother was wild, expelled from school. The primal wound of separating a mother from a child runs deep.

My grandparents were the stability in my life, solidly good people struggling with their wayward daughter, her multiple marriages and affairs and house moves. The harshest thing my Nana ever said to me was, “Enough of that old Suffolk sing song!”– because she came from Norfolk and my accent was appalling to her.

The older I get, the more I see that the story I was told cannot possibly be true, and that my mother was probably not a tiny baby at all when she was adopted. This makes me incredibly sad. The abandoned child.

So this fading image is complicated, and if this baby had not died I would not be here, which is a hard thing to think about. This is a picture of my origin in some way. It is a picture of something that could not be said. When I was little, people often remarked how much I looked like her, rather than my Mum.

Grace loved me. That’s still what I see here, despite what I know. Love runs thicker than blood.

Suzanne Moore is a journalist who has written for Marxism Today, the Mail on Sunday and the Guardian.