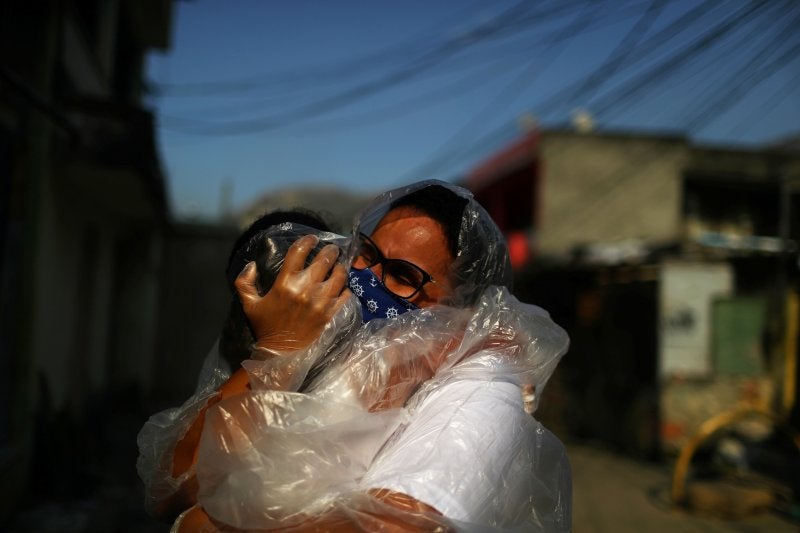 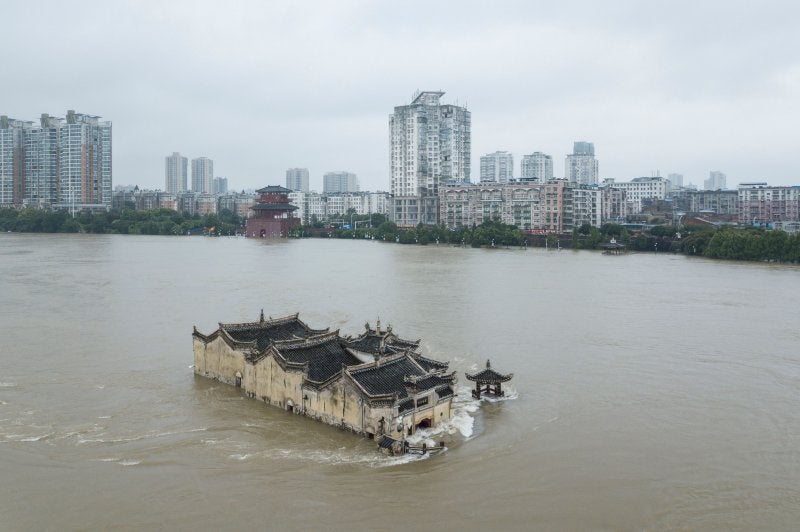 The Guanyinge temple, a 700-year old temple built on a rock, in the swollen Yangtze River in Wuhan in China’s central Hubei province. Heavy rains since June have left at least 141 people dead or missing, forced nearly 15 million people to be evacuated from their homes in July alone, and caused billions of dollars in economic losses, according to the government. Photo by STR/AFP 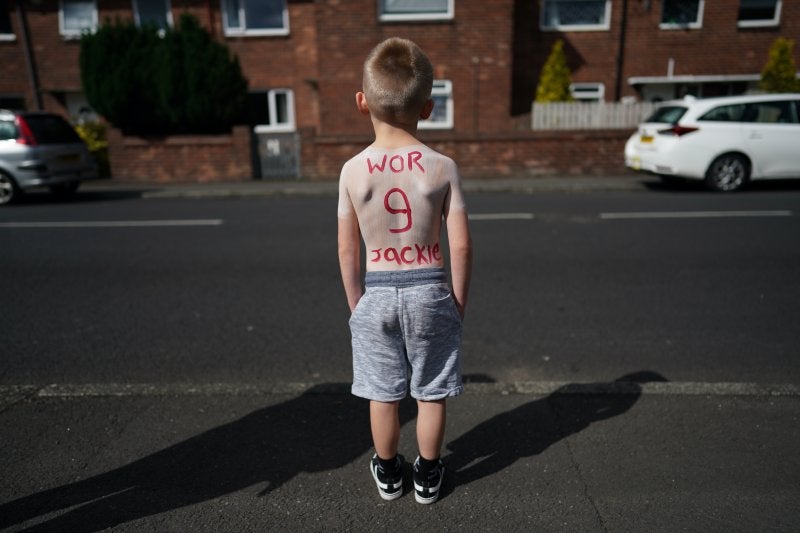 Mason King, six, pays tribute to Jack Charlton ahead of the footballer’s funeral cortege, which passed through his childhood home town on 21 July 2020 in Ashington, Northumberland. John (Jack) Charlton was part of the England 1966 winning World Cup football team, along with his brother Bobby. He played as a defender for Leeds United and won FWA Footballer of the Year in 1967. After his playing career finished he went on to manage Middlesbrough, Sheffield Wednesday and Newcastle United. In 1986 he became manager of the Republic of Ireland football team and led them to their first World Cup in 1990. He was awarded honorary Irish citizenship in 1996. Charlton died at home in Northumberland on 10 July 2020, aged 85. Photo by Ian Forsyth/Getty Images 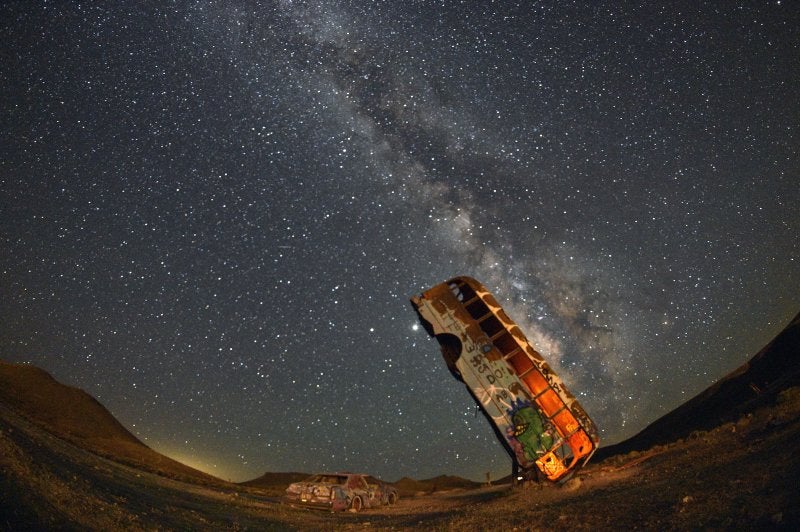 The Milky Way galaxy is seen in the sky above the International Car Forest of the Last Church in Goldfield, Nevada on 18 July 2020. The roadside attraction, created in 2002 by Mark Rippie and Chad Sorg, has more than 30 automobiles, including cars, trucks, vans and buses, that have been balanced on their ends or stacked on top one of another. Photo by David Becker/AFP 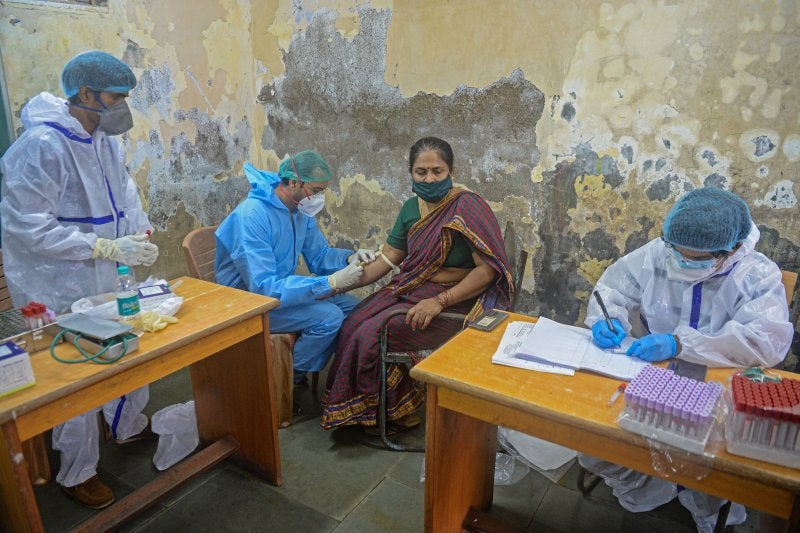 A woman who has recovered from coronavirus donates blood plasma during a screening at a school in Dharavi, Mumbai on 23 July 2020. On 17 July India became the third country after the United States and Brazil to hit one million cases, but many experts say that with testing rates low, the true number could be much higher. Photo by Indranil Mukherjee/AFP 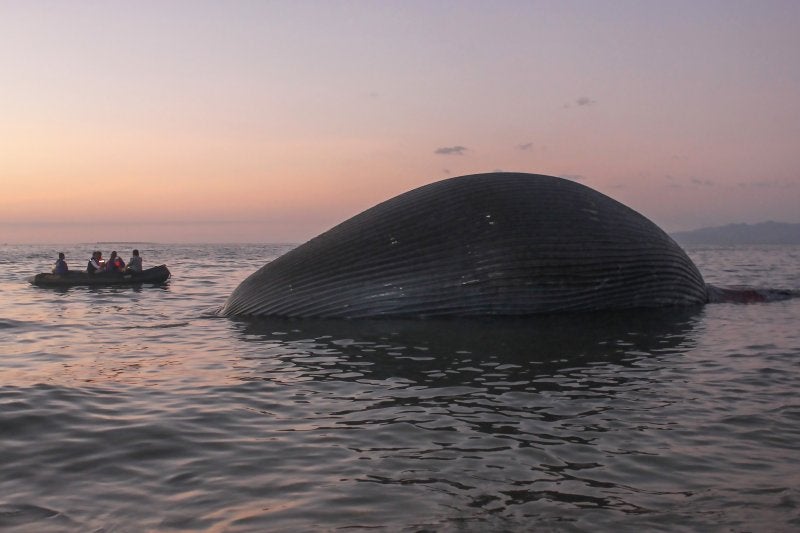 Local officials inspecting the bloated carcass of a whale near the shore in Kupang, in East Nusa Tenggara, on 21 July 2020. The 23m whale washed up near a beach in Indonesia, but it was unclear how the marine mammal died, a conservation official said. Photo by David Wilson/AFP 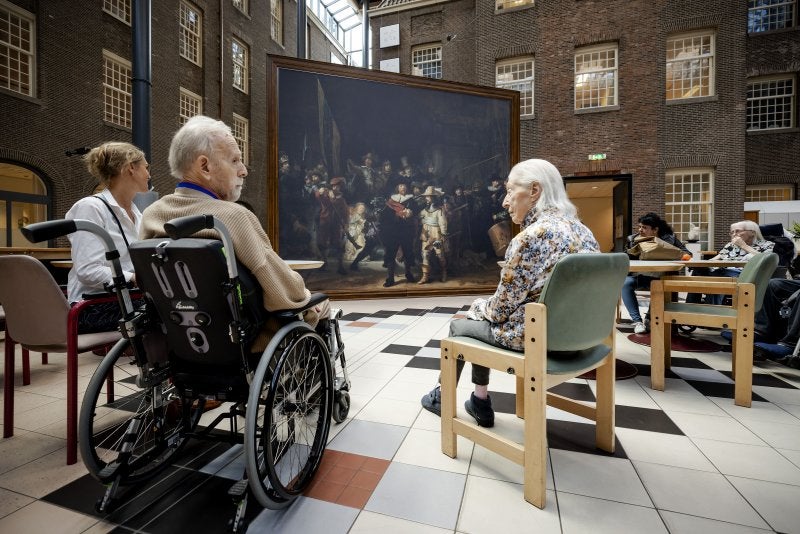 Residents of the Dr Sarphati House nursing home in Amsterdam, the Netherlands, sit in front of a true-to-size version of the painting The Night Watch by the Dutch painter Rembrandt van Rijn, on 20 July 2020. This summer the Rijksmuseum is bringing a version of the world-famous painting to 30 nursing and care homes and senior complexes. Outings to cultural institutions are not possible for many elderly people due to the coronavirus crisis. Photo by Robin van Lonkhuijsen/ANP/AFP 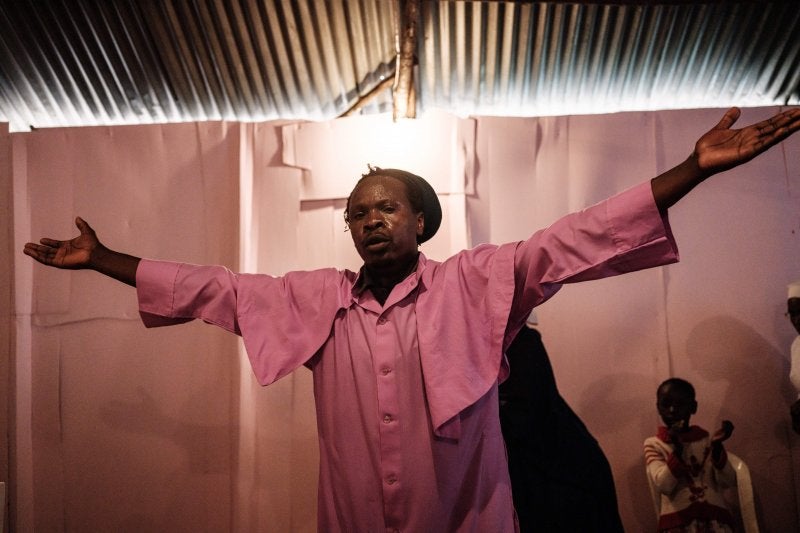 Worshippers sing at a service at the Holy Blessing church in the Kibera slum of Nairobi, on 19 July 2020, for the first time since March. Kenya’s President Kenyatta reopened places of worship under strict guidelines. Photo by Yasuyoshi Chiba/AFP 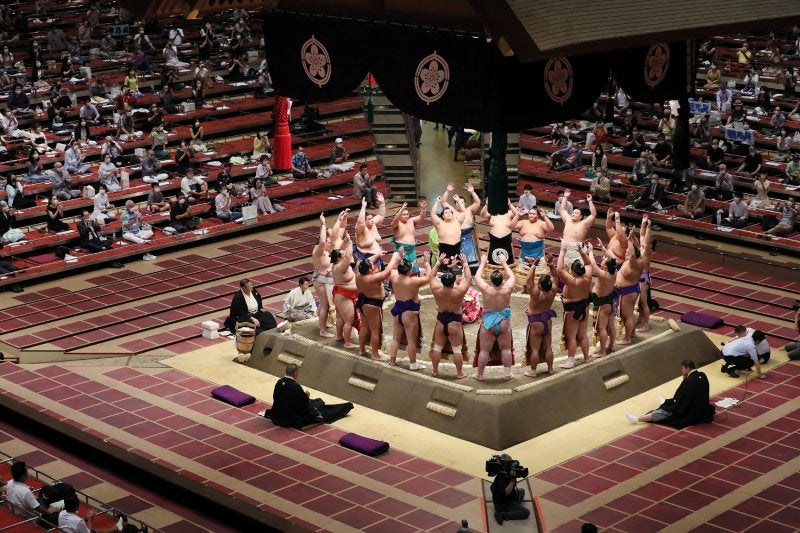 People sit apart to observe social distancing while watching wrestlers perform a ceremony ahead of their bouts during a new two-week sumo tournament at the Ryogoku Kokugikan, the main sumo arena in Tokyo, on 19 July 2020. The tournament began in front of a live audience on despite a steady rise of coronavirus cases in Japan, with fans voicing both joy and caution about watching the live spectacle during the pandemic. Photo by STR/JIJI PRESS/AFP

Vivienne Westwood gestures from inside a giant bird-cage, suspended off the ground, in front Of the Old Bailey in central London on 21 July 2020, in protest at the extradition trial of Wikileaks founder Julian Assange. Photo by Niklas Halle’n/AFP 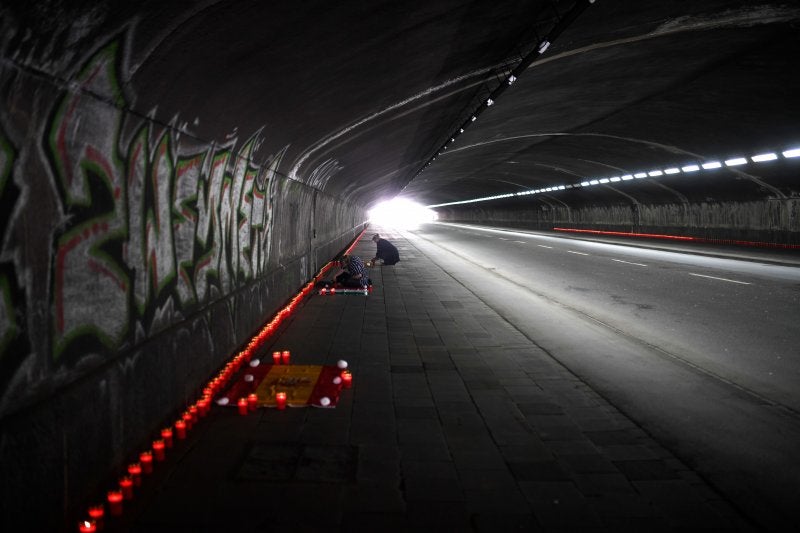 People light candles before a commemoration ceremony on the eve of the tenth anniversary of the Love Parade tragedy in Duisburg, Germany, on 23 July 2020. A total of 21 people were killed in a crushing event in a crowded tunnel at the Love Parade music festival on 24 July 2010. Photo by Ina Fassbender/AFP 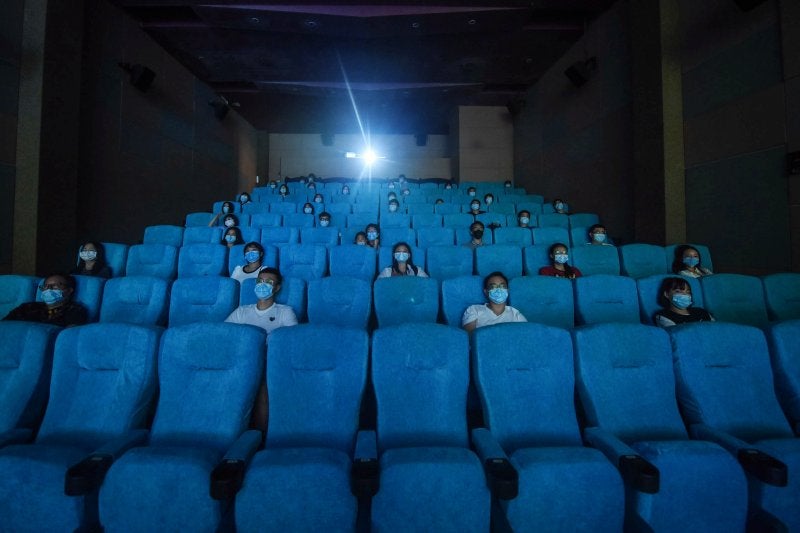 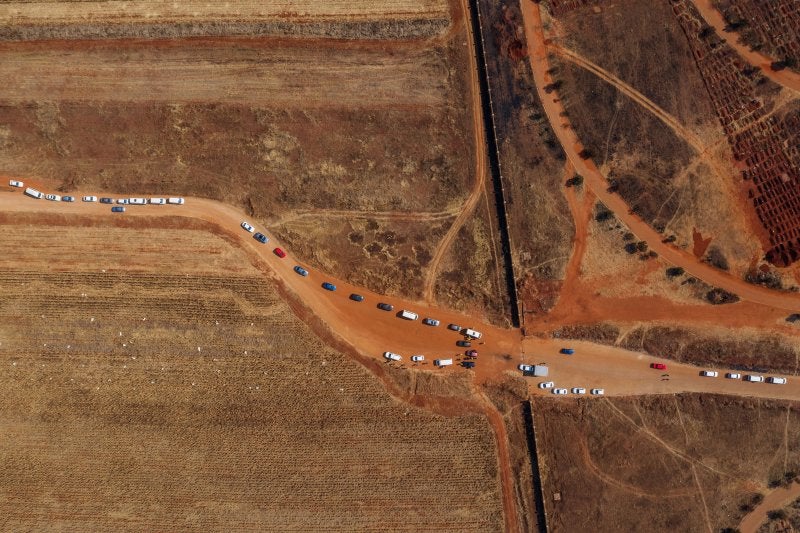 An aerial picture shows funeral processions queueing at the entrance of the Olifantsvlei Cemetery in Soweto, South Africa, on 23 July 2020. Photo by Michele Spatari/AFP 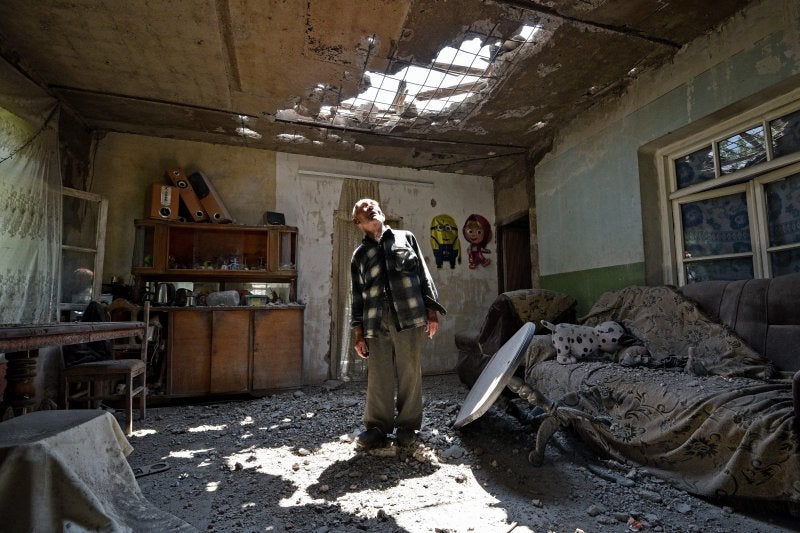 Aram Vardazaryan stands inside his home in the village of Aygepar on the Armenian-Azerbaijani border on 18 July 2020. The building was damaged by shelling during armed clashes. Photo by Karen Minasyan/AFP 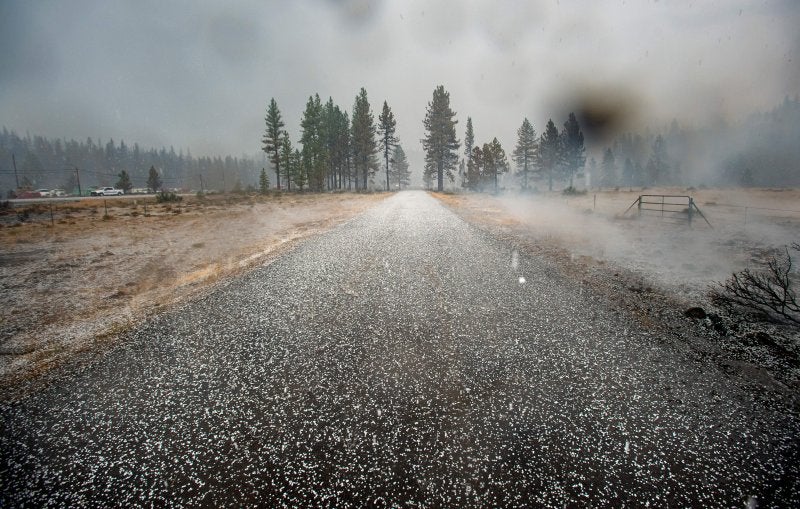 Hail covers a road in a still-smoldering area affected by the Hog Fire near Susanville, California, on 21 July 2020. A thunderstorm cell mixed with a pyrocumulus ash column from the Hog Fire, causing erratic winds and lightning, followed by a hail storm that extinguished a portion of the fire. Photo by Josh Edelson/AFP 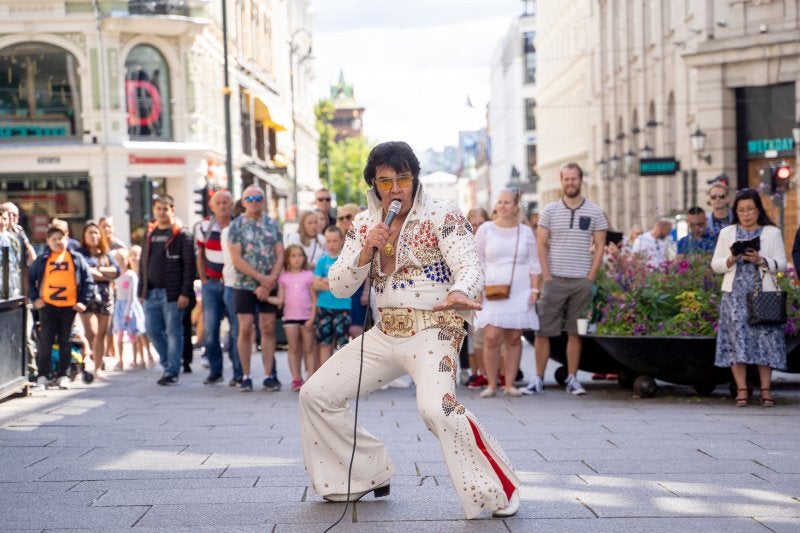 The Norwegian artist Kjell Elvis (Kjell Henning Bjørnstad) performs in central Oslo in an attempt to beat the record of the world´s longest Elvis Presley singing marathon on 23 July 2020. His plan is to perform continuously for 50 hours, ending on the morning of Saturday 25 July. Photo by Fredrik Hagen/NTB Scanpix/AFP 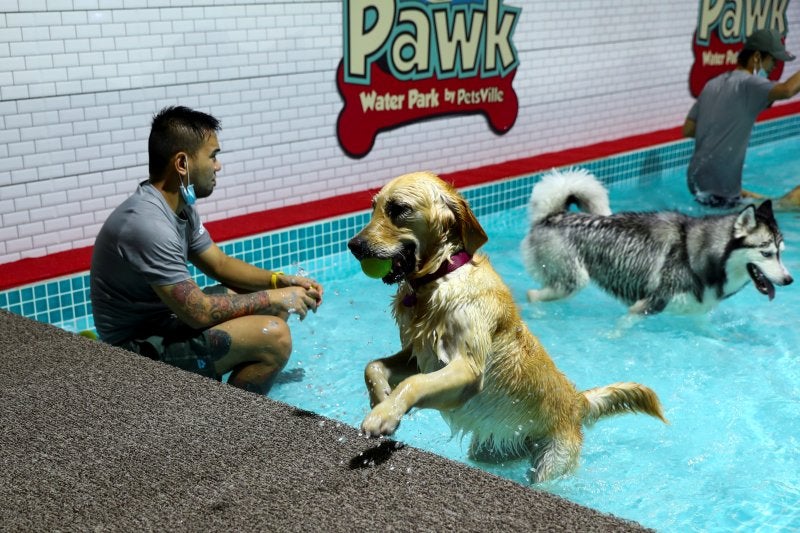 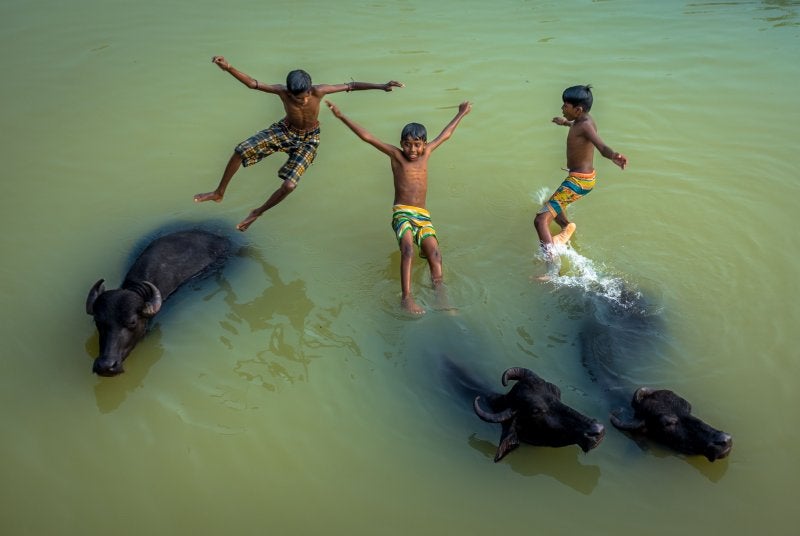 Children play and jump on top of large cattle as they all wash in a pond in Garbeta, West Bengal, India. The local herders bathe the animals in the water to protect them from insect bites and keep them cool. Photo by Saurabh Sorohiya/Solent News/Shutterstock