“When you’re first starting out, you think that joining a major label is the only route that you should take. It takes experience to realise that it’s not the dream. For a lot of people it’s a dead-end road.”

The Canadian artist Kiesza (real name Kiesa Rae Ellestad) would know. Her career started with a bang in 2014 with her breakout single “Hideaway”, a propulsive dance-hall track, which topped the UK Singles Chart upon release and became the third-fastest selling UK single of that year. Kiesza had released the single through an indie label, Lokal Legend, and was soon picked up by Island Records (owned by Universal Music Group), which put out her debut international album, Sound of a Woman, in October 2014. But major label glory wasn’t all it was made out to be. “Once I signed to a major label, everything slowed down,” she tells me via Zoom from her home in Toronto.

The major label was “fear-based” and concerned with making maximum profit at every single stage of the decision-making process. “It wasn’t about growth and longevity. It was about: how much are we profiting right now? They weren’t even really concerned about me as a person.”

In the music industry, discussions about labels, contracts and deals are usually seen as non-glamorous business talk to be kept behind the scenes. But the agreements made in boardrooms are a crucial part of the mechanism by which an artist achieves success, particularly for pop acts on one of the “big three” major labels, Sony, Universal and Warner. Even though it can appear an artist is living the dream – topping charts and playing sell-out shows – behind closed doors, the business of music is tough.

Even Taylor Swift, arguably the most successful solo pop artist of the past decade, is not immune. In November 2018 Swift announced a new deal with Republic Records, owned by Universal Music Group, and departed from Big Machine (a country label distributed by Universal). According to her deal with Big Machine, which Swift signed when she was 15, her masters – the original recordings of her music – were owned by the label and its founder, Scott Borchetta. Anyone wanting to make a copy of a master recording (for digital platforms, CDs, or use in live shows), including the artist, must ask for permission from the owner of the rights, and pay a fee. In June 2019, the media proprietor and record executive Scooter Braun, whom Swift has accused of “bullying” her, bought Big Machine, meaning that Swift’s masters were now in his hands.

That Swift, who has long stood up against the artist royalty practices of Apple Music and Spotify, could not have control over her own music seems surprising, but her situation is not unusual. “Thankfully, I am now signed to a label that believes I should own anything I create,” she wrote in a damning Tumblr post, after giving a warning to young female musicians: “This is what happens when you sign a deal at 15 to someone for whom the term ‘loyalty’ is clearly just a contractual concept. And when that man says ‘Music has value’, he means its value is beholden to men who had no part in creating it.”

Even outside of arena pop, major labels still have a hold over young artists. The English folk-pop songwriter Lucy Rose signed to Columbia Records (a subsidiary of Sony) at the age of 22. When we meet pre-lockdown on a rainy day in east London, Rose, now 31, remembers feeling like she didn’t have much choice. “At the time, I was ignorant. I wasn’t misguided – I really liked my old manager and am still close to him – but I didn’t realise the implications of signing that deal.”

Rose’s first album, Like I Used To, was released in 2012 through Columbia. It was when she came to write its follow-up that she had problems. “They [the label] got more controlling. I wanted to go and make another record, but they told me I didn’t have the hits, that the first record had failed. I felt like it had been successful: it was in the Top 15; I was selling out venues I’d dreamt of playing. And then I would have a very grounding meeting about how disappointing the whole thing had been for them, with 20 people around a table. That’s where the manipulation can begin.” 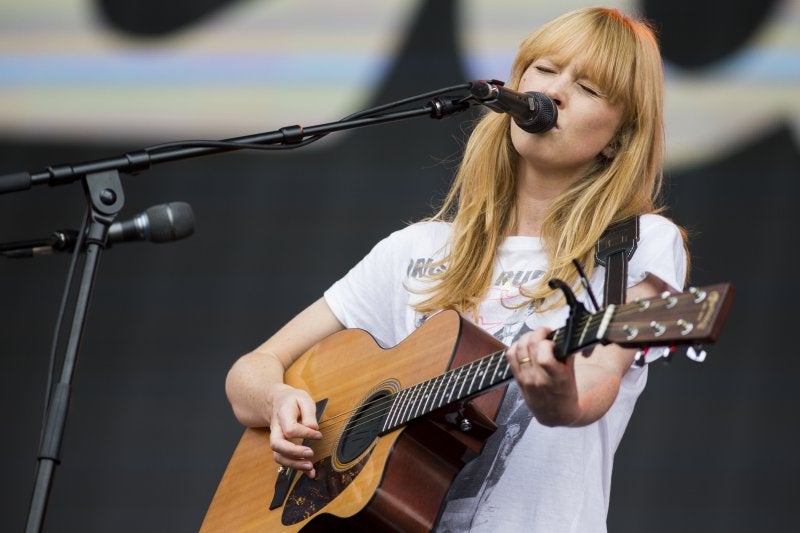 Like Kiesza, Rose had to compromise on her artistic vision. She was “deeply unhappy” while writing her second album, the explicitly pop-focused Work it Out (2015), forced to write “more upbeat and radio-friendly songs”. She felt a pressure to make her music more “commercial”, to mould it into “something they imagined more people would buy”.

“They tried to change my band, who were all my best mates,” she says. “So they were like, ‘Fine, we’ll let you keep your band, if you do some co-writes.’ There was blackmail going on.”

There were attempts, too, to change her image. “For me, it was about trying to keep a moral compass. I wanted to be in jeans and a T-shirt. I didn’t want to be styled, or in a £400 jumper for the sake of it being £400. There were very small things on the aesthetic front, but those small things add up.

“At that point, you feel your dreams slipping away. In all of that, I lost some part of my identity, of knowing who I was and what I liked. I started worrying about writing hits, which was very unlike me.”

Rose was signed to a four-album deal with Columbia, which she was able to leave after two records. She met with the label’s managing director and asked to be dropped, knowing that the label could have forced her to stay. “I pretty much said, ‘If you do that, I’ll make your life hell, so I’d recommend you don’t.’” She says she parted with the label, as well as her manager and agent, on good terms. But the experience had made her question her chosen career path. “I didn’t even know if I wanted to do music any more, particularly.” Once she got back on her feet, she “felt the freest and most empowered” she had in a long time.

[See more: There are many Bob Dylans – and they’re all present on Rough and Rowdy Ways]

Kiesza’s break from Island after one album was not so convivial. She was on a two-album deal, but wishes she had only signed for one, because the second kept her “in limbo” for two years. “I had to constantly annoy the label to let me go,” she tells me. “I had my lawyer send them a message every day.” She says the label would not release her because it was still profiting from “Hideaway”, while she earned just 15 per cent of the profits from her masters, out of which she had to pay her producers. “Everybody says that’s the standard deal. In my view, it’s criminal.”

Then in 2017, during a period of fighting with the label, Kiesza was involved in a car accident. She was left with a traumatic brain injury that doctors said would end her career as a performing artist. What did the label do after the accident? “Oh, they just jumped ship,” she says, shrugging. “But it was actually the best thing that happened to me. Everyone thought I was done for.”

When the label released her following her injury, Kiesza was free to make the music she wanted to. This August, largely recovered, she is putting out her follow-up, Crave, on her own independent label, Zebra Spirit Tribe.

The label is just Kiesza, her manager and a small distribution team, and setting it up is a “risk”, she says. “I’m paying salaries from my own bank account. When you talk pay cheque to pay cheque and royalty to royalty, I don’t always know what I’m getting, which is a challenge.” She realises that she is lucky: she still earns money from streams of “Hideaway” – though, of course, Island earns more.

For her third album, Lucy Rose signed to Communion, an independent label co-founded by Mumford and Sons’ Ben Lovett, which has been responsible for launching the careers of artists including Ben Howard and Michael Kiwanuka. She and the label share the profits 50/50, a far fairer deal than the 80/20 split she says many majors offer. On Communion, she feels “understood as an artist” for the first time in her career.

This new lease of life has led Rose, like Kiesza, to start her own independent record label, Real Kind Records, in partnership with Communion. She has total creative control over the artists she signs, and her splits are “artist-friendly” too: 50 per cent to the artist; 25 per cent to Communion; and 25 per cent back into Real Kind. This financial fairness is imperative to Rose, who notes that despite the reputation many indie labels have for being honest, some still do 80/20 deals. As critic Liz Pelly points out, the association of independence with goodwill has worn thin. “It’s shocking, really, because you would never expect it in a million years,” Rose says. “I feel like that profit is your ownership, more than the actual owning of the copyright. It’s about having your fair share.”

The first record released on Real Kind, on 10 July, will be A Small Death, the sixth album from the Oklahoma folk songwriter Samantha Crain, who has always worked with indie labels. The intensely personal nature of the album, which deals with grief and anguish, made Crain determined to work with people who really cared.

“More than anything, this was a chance to release a record with somebody who liked the record,” Crain says. “I know that sounds insane, but you would be surprised how rare that is in a music business that is so saturated. I can’t say that I’ve ever really felt like the people I was working with were 100 per cent excited about what I was doing. Lucy is always thoughtful. It’s really inspiring.”

Rose says she will continue to put her own music out through Communion; Real Kind serves as a platform for other artists she is excited about who are getting overlooked elsewhere. At the moment she is working for the label for free, she says, “which is fine, but completely consuming. I can only do that because I’m lucky enough to have income from my own music that’s going to support me while I go through this venture, so I can have my artist-friendly deals. But if in three years’ time I’ve not made a penny from all this work, it’ll be a very different situation.”

Turning to independent labels has allowed both Kiesza and Lucy Rose to rekindle their love of writing and performing music after difficult periods on major label contracts. But there is no doubt that without the safety net of a major label’s finances – and the boost they give artists on streaming services – making a living running an indie is difficult.

“I’m fighting for my life out here,” says Kiesza, “but it’s been the most rewarding experience.”