At first glance, it doesn’t seem like much. At Christine and the Queens’ smallest London show to date, Chris, clad in an embellished velvet suit, works the stage alone without a band or dancers. She performs to a synth-filled backing track, the only live instrument her irresistibly rich voice; the venue’s kitsch stage-set all that glitters behind her. “I feel like I’m 16 years old and I’m doing a cabaret,” she laughs. The set-up may be little more than an impressive karaoke session, but, in town to celebrate her new EP La vita nuova, France’s biggest pop star is typically resplendent.

Born Héloïse Letissier in Nantes, as a young performer she was expelled from a theatre studies course for staging a play without permission – directing was for male students only. She channeled her frustration into music, emerging as the androgynous Christine and the Queens, and later morphing into “Chrisssss”, as she introduced herself on the 2018 single “Girlfriend”.

In early concerts, her backing band was made up of drag queens and she declared her music “freakpop”. On two critically acclaimed albums, Chaleur Humaine (“Human Warmth”) and Chris, she flits between English and French, each language light on her tongue, her music not “freaky” so much as propulsive and groove-laden, drawing on Michael and Janet Jackson, Björk and Grimes. She has won a cult following for her willingness to surrender herself to dance, for her sure-sighted embrace of queerness, for how deep the emotional power of her music cuts.

Most of all, Christine and the Queens is an artist of contradictions. She is both masculine and feminine at once. She is tough, then suddenly gentle. She wallows in sadness without giving up an ounce of sensuality. She flies with a graceful exactitude, then moments later flails, her disjointed limbs and wandering eyes lending her the appearance of a dancer possessed. She is a pure pop artist who harbours high art ambitions.

All of this is why a show on the tiny stage of a former Hackney servicemen’s members’ club fits Chris just right. Artists are typically applauded when they play their largest show to date, but Chris spins that notion on its head. In a venue more than 30 times smaller than her last London show, her adoring fans see up close how the star’s quips stand alongside her vulnerability.

She describes La vita nuova, released at the end of February with an accompanying six song-long video, as a “fever dream”: something sweaty and troubling, but ultimately cathartic. “If you disappear, then I’m disappearing too,” she sings in the opening track, “People I’ve been sad”, which is notably slower than much of Chris’ previous work, but deft in its acceptance of grief. An interest in vanishing continues in the urgent “Je disparais dans tes bras” (“I disappear in your arms”), but Chris doesn’t allow herself to crumble in the face of unrequited love, and instead builds up a wall of resilience. “Ay ay ay ay – that’s universal language for sass!” she says, holding out her microphone for those in the front row to sing into with her. On “Mountains (we met)”, which she describes as “a love song for someone already gone”, she tips her head back to grow distant from the microphone, losing herself to the song’s hypnotic revolutions.

There is no doubt that Chris can hold this crowd by herself. Yet shadows haunt the stage, uncanny reminders of the dancers with which she usually surrounds herself. The arrival of Caroline Polachek, to sing the Italian verse on “La vita nuova”, offers Chris a real, full body with which to cavort. Polachek – formerly of the US indie-pop group Chairlift, and now a solo artist whose excellent debut record Pang was released at the end of last year – cuts a different figure to Chris: she takes longer strides and is more prone to spinning. In the song’s video, Polachek plays the temptress to Chris’s vampire. Onstage there is no biting; the sexual appetite of the song is instead played out through breathy syllables and gyrating hips. Each wields her microphone knowing she is singing next to one of the finest pop stars of her generation. 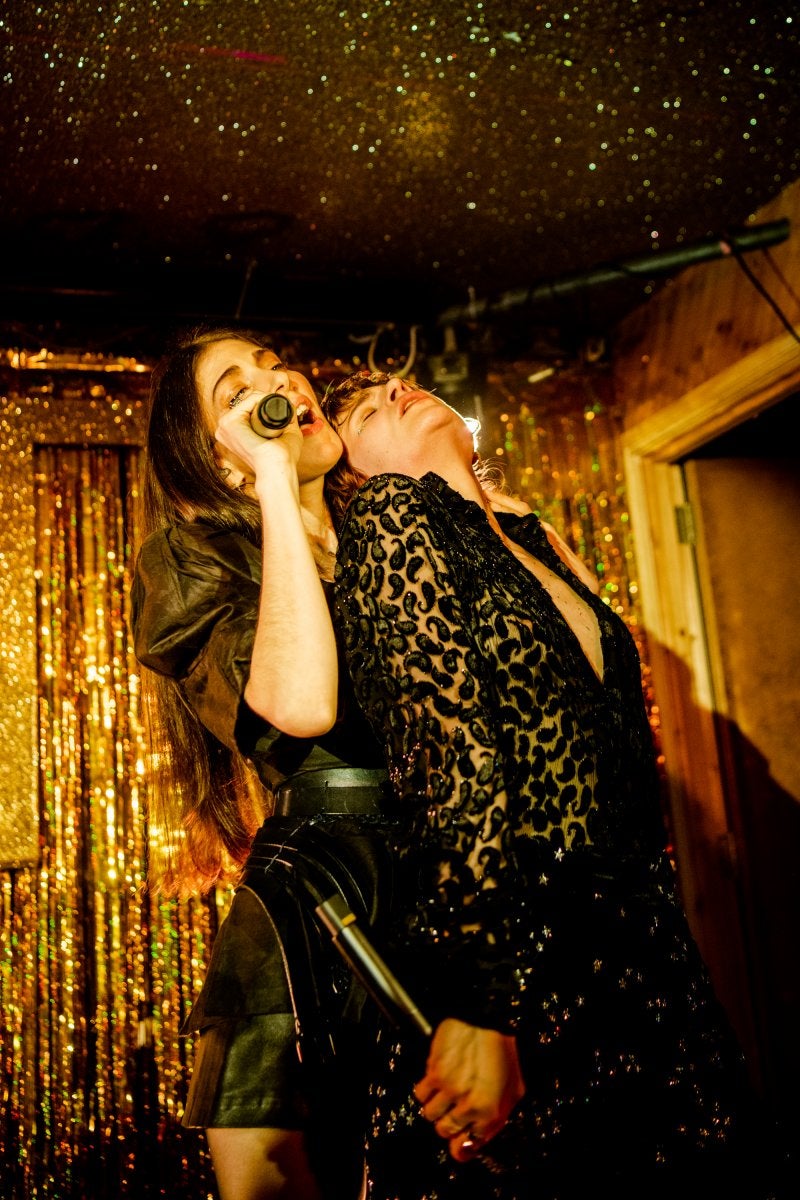 Christine and the Queens and Caroline Polachek. Credit: Gaelle Beri

With the EP wrapped up, Chris introduces songs from her “repertoire”, a word she purrs, playing up her French accent with a twinkle in her eyes. She performs two of her biggest hits, “5 dollars” and “Tilted” (the latter of which takes her out onto the floor and into the crowd), before launching into what she describes as a “witchy French dance track”. “Intranquillité” (“Tranquility”) mixes the eeriness of Björk’s Selmasongs with a ringing Eighties sensibility that wouldn’t feel out of place on the Call Me By Your Name soundtrack. With Chris at the helm, we could be taken anywhere, so mesmerising is her ability to shapeshift. “Theatre as a space matters more to me than reality,” she grins.