After 21 dates, 20 cities, 19 suits, 14 countries and one kilt, Harry Styles’s European tour came to a close last night in Dublin. Some of his most dedicated fans attended a handful of dates in a row, organising their own queuing systems, and arranging tributes to the Manchester terror attacks. “Feel free to be whoever you want to be in this room,” Styles said at every gig, always bringing an LGBT flag on to the stage as he performed. As ever, his shows were a always collaboration between artist and audience to create a safe space for teenage girls and LGBT fans.

On this tour, two fans in particular went above and beyond to create a visually striking, affirmational statement. Ksenia, 17, and Luna, 20, came up with the Rainbow Project, a labour-intensive and involved plan to invite those attending the London dates of the tour to participate in a giant rainbow running around the circumference of the O2 Arena. The project involved distributing 14,000 pieces of differently coloured paper and instructions each night to different seat sections: fans were then invited to put the paper over their phone torches during the song “Sweet Creature” to create a rainbow light effect.

Ksenia and Luna tell me they have been fans of Harry’s since his One Direction days: in 2014 and 2012 respectively. “We are really proud of how far he’s come,” Luna explains, “from being afraid of what people thought of him, to confidently pulling off wearing a dress!” The two say they were inspired by Harrys support of the LGBT community: “We just wanted to do something for him.” 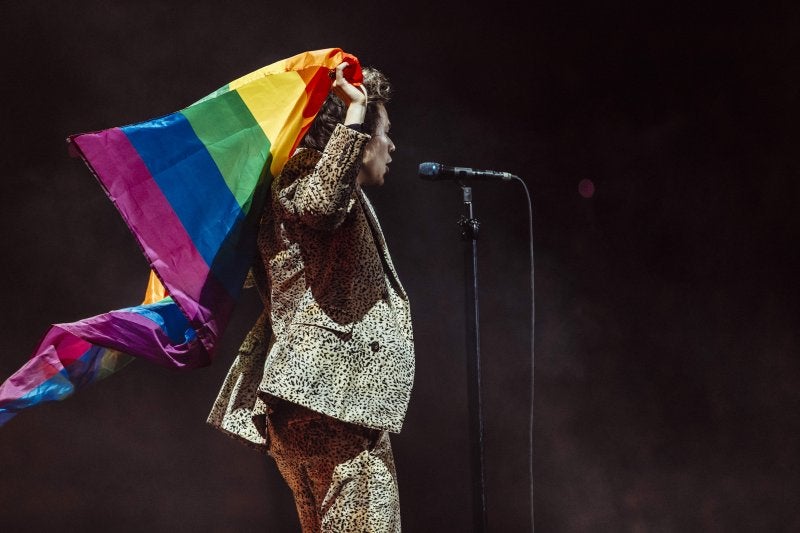 Such fan projects aren’t new. As the writer Aamina Khan explains, One Direction fans – who are known for collectively organising to win polls, drive obscure songs to become chart hits, or raise money for charities the band have supported in the past – have been organising fan projects around the rainbow flag since 2014. As the presence of such flags became more and more visbile, Styles in particular started engaging with both the symbol and its message: draping flags around him speaking of love and equality to the crowd. Last year, fans brought hundreds of #BlackLivesMatter signs to Harry Styles concerts.

But Ksenia and Luna’s project seems by far the most complex and challenging so far. “It took us three months to prepare the project,” Luna explains. “We had a group of about 25 volunteers for each show who helped us to hand the colours out. Almost everyone in the arena got a colour, so we made 28,000 pieces in total for the two days.”

5000 PIECES LATER AND I AM READY FOR TOMORROW

Aside from the hours and organisation needed to produce, print, cut out and distribute close to 30,000 small pieces of paper, they both feared that the strict security teams at venues like the O2 wouldn’t take too kindly to their plan. “Obviously you are scared that what you planned doesn’t work out,” Luna explains. “But we were pretty optimistic.” 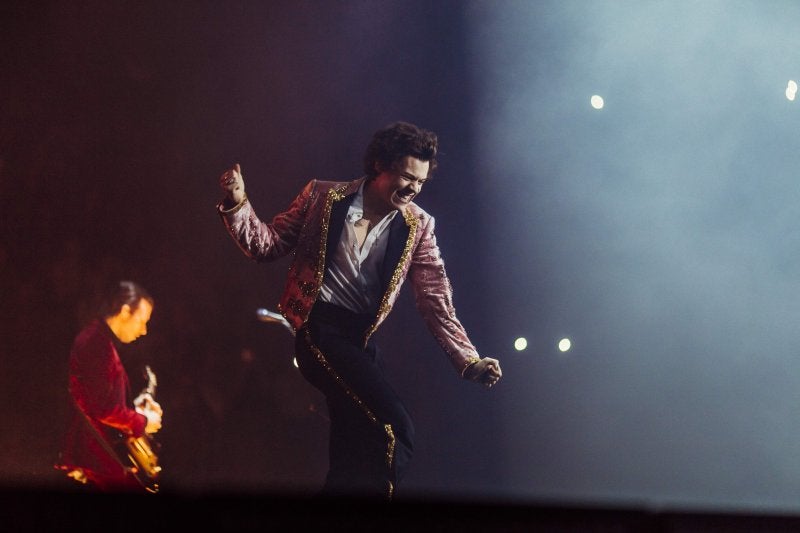 “The venue sadly did take 5,000 pieces away from us on the first night, as we needed permission to do the whole thing – which we didn’t know. The next day, the O2 and its venue manager Rachael reached out to us, and we were happy to have official permission. That night everything worked out perfectly and we’ve never seen something more stunning. It left us speechless.”

tonight at the harry styles pop show, fans lit the audience up with a rainbow flag pic.twitter.com/8iukWrDYbS

“Harry creates wonderful safe spaces each night he steps on stage,” they tell me. “We think we speak for everyone when we say that we’re thankful for that.”

Luna says that the inclusive feeling of Harry Styles concerts is a collaboration between both audience and artist:  “He brings a message, and we as fans chose what we can identify with or look up to. The combination of that creates the feeling at a concert.” 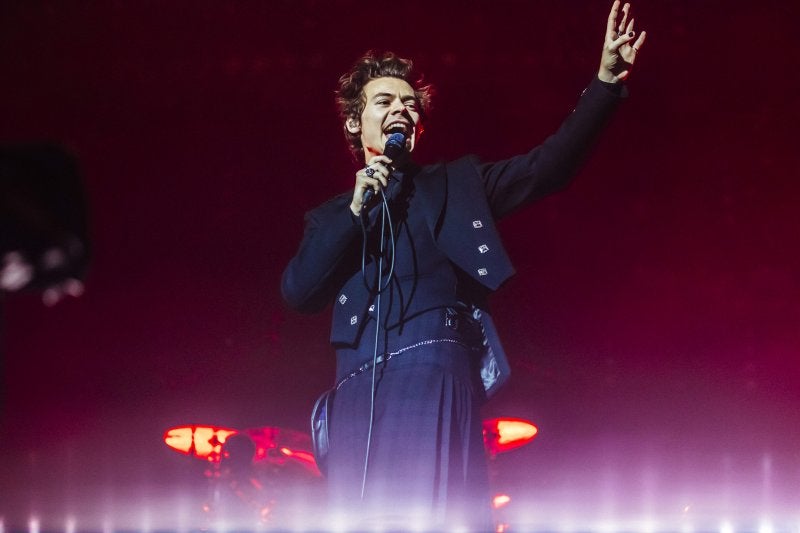 The Harry Styles tour has left Europe, but it’s far from over. As it moves on to Australia, Asia and America, more creative fan projects are undoubtedly on the way.

All photos by Hélène Pambrun.

Newsletters from the New Statesman View all newsletters
Subscribe for the best of our politics, international affairs, culture and business coverage, straight to your inbox
THANK YOU
Topics in this article : Harry Styles