There are few conductors who receive rapturous applause before they have even lifted their baton for the first beat. At the Proms, John Wilson is one of those lucky few. It’s not an honour that is earned easily. Since 2009, when Wilson first brought his meticulously musical approach to classic film and stage music to the Royal Albert Hall, he has garnered a reputation for innovative, witty programming and consummate musicianship that has resulted in his concerts becoming some of the hottest tickets of the season.

As well as a conductor, Wilson is something of a musical detective. Over the past few years, he has been instrumental in recovering the original scores of many classic musicals, including High Society, Singin’ in the Rain and An American in Paris. With his orchestra – a kind of super-group of musicians hand-picked from the best ensembles in the world – he produces performances of these lost scores of such clarity and feeling that you are left wondering how such music could ever have been allowed to get lost in the first place.

This year, he brought us the original 1948 orchestrations of Cole Porter’s Kiss Me, Kate, complete with a full company of singers and dancers. This isn’t the first time Wilson’s orchestra has played for a whole show at the Proms: this one follows on from the success of 2012’s semi-staged My Fair Lady. Stuffed as it is with big-hitting numbers – “Too Darn Hot”, “So In Love”, “Why Can’t You Behave?” and “Always True To You in My Fashion” – this Kate was a much-anticipated treat of the 2014 season. 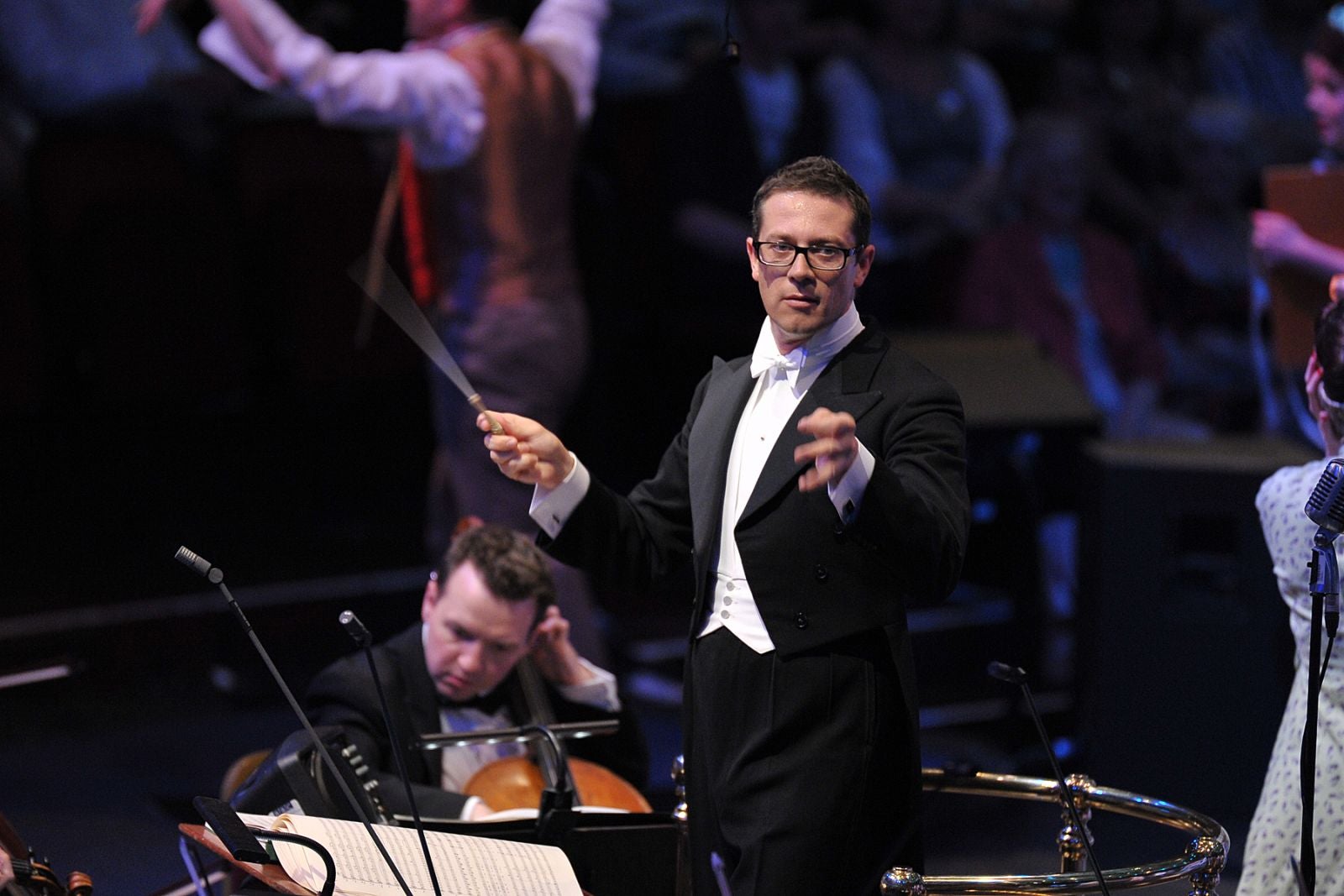 The show lived up to its billing. The company ensemble singing was excellent, the dancing sharp and balletic, the costumes clever. Great use was made of the Royal Albert Hall’s size and shape – performers chased each other up and around the orchestra via the organ, wriggled through the prommers in the arena, and characters trying to escape the venue got a big laugh with a “round and round and round” gag. The sound, too, held up, with only the odd glitch affecting the performers’ radio mics.

Kiss Me, Kate came at the end of a difficult decade for Cole Porter, in which he has struggled to replicate the success he had enjoyed in the 1930s with shows like The Gay Divorce and Anything Goes. His decision to base a musical around a production of Shakespeare’s The Taming of the Shrew was unexpected, to say the least, but ultimately vindicated – spanning over 1,000 performances in its initial run, the show because Porter’s longest-running hit.

The Shakespearean “play within a play” elements ask a lot of the show’s principals, who alongside the fast-paced dialogue and vocal agility must give convincing performances in the Shrew sequences. (The domestic violence in Shakespeare’s play requires a slight suspension of feminist anger if it is to be enjoyed.)

In this production, the principals managed this admirably. Broadway stalwart Ben Davis was suitably arrogant and unctuous as leading man Fred Graham/Petruchio, while Tony Yazbeck made an elegant, raffish Bill Calhoun and Lucentio, his virtuosic tap-dancing a joy to watch. These two were outshone, though, by the women. Louise Dearman’s Lois Lane/Bianca was completely captivating, and her rendition of “Always True to You in My Fashion”, complete with audience interaction and jaunty winks, was one of the highlights of the show. 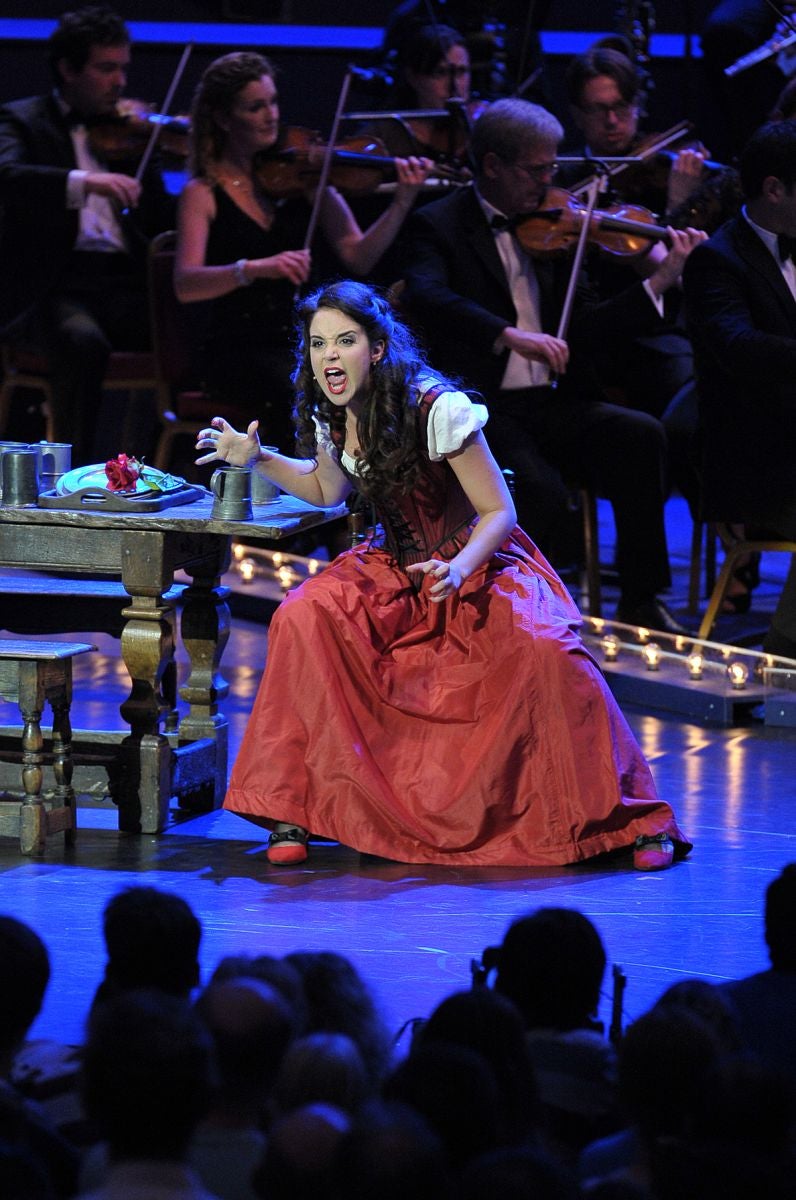 Alexandra Silber (left), leading the cast as Lilli Vanessi/Katherine, was the stand-out of the evening, though. Critically acclaimed for her recent performance as Maria in the San Francisco Symphony’s West Side Story, Silber brought a similar range and passion to this part. Her “I Hate Men” had the audience gasping and applauding by turns, her “So In Love” was tender and touching, and the way she threw flowerpots at Davis’s head was truly magnificent.

The 1953 MGM film version sanitised some of Porter’s songs, but this was Kiss Me, Kate in all its glory. Jason Pennycooke’s take on “Too Darn Hot” was sultry and saucy, and he was ably backed up by the company with some spectacular choreography. But the best, and rudest, lyrics are of course in “Brush Up Your Shakespeare”. Lines such as “If she says your behaviour is heinous,/ Kick her right in the Coriolanus” deserve to be roared to the rafters, and so they were.

The real star of the show, though, was always going to be the orchestra. From the first impossibly crisp syncopations of the overture, their sound bewitched the ear. This was the tightest pit band in the world, plucked out of the darkness and given pride of place on stage. As always with Wilson’s outfit, the orchestra’s shape concealed several other ensembles which emerged as the score went on – a sparkling horn section, a jazz trio, a cool, laid-back drums-and-bass duet. Over it all lay the strings, swooping fiercely as Wilson pushed and pulled Porter’s melodies to reveal their maximum emotional potential.

In fact, the only disappointment of the evening was that it wasn’t possible to spend more time drinking in the extraordinary musicianship displayed by the orchestra – at times, the dance sequences felt like they got in the way. But in between the high kicks and lifts it was always just about possible to see Wilson, jiving along on his podium, making it all happen.

You can listen to this performance on the BBC Radio iPlayer for 30 days, and a televised version will be broadcast in December