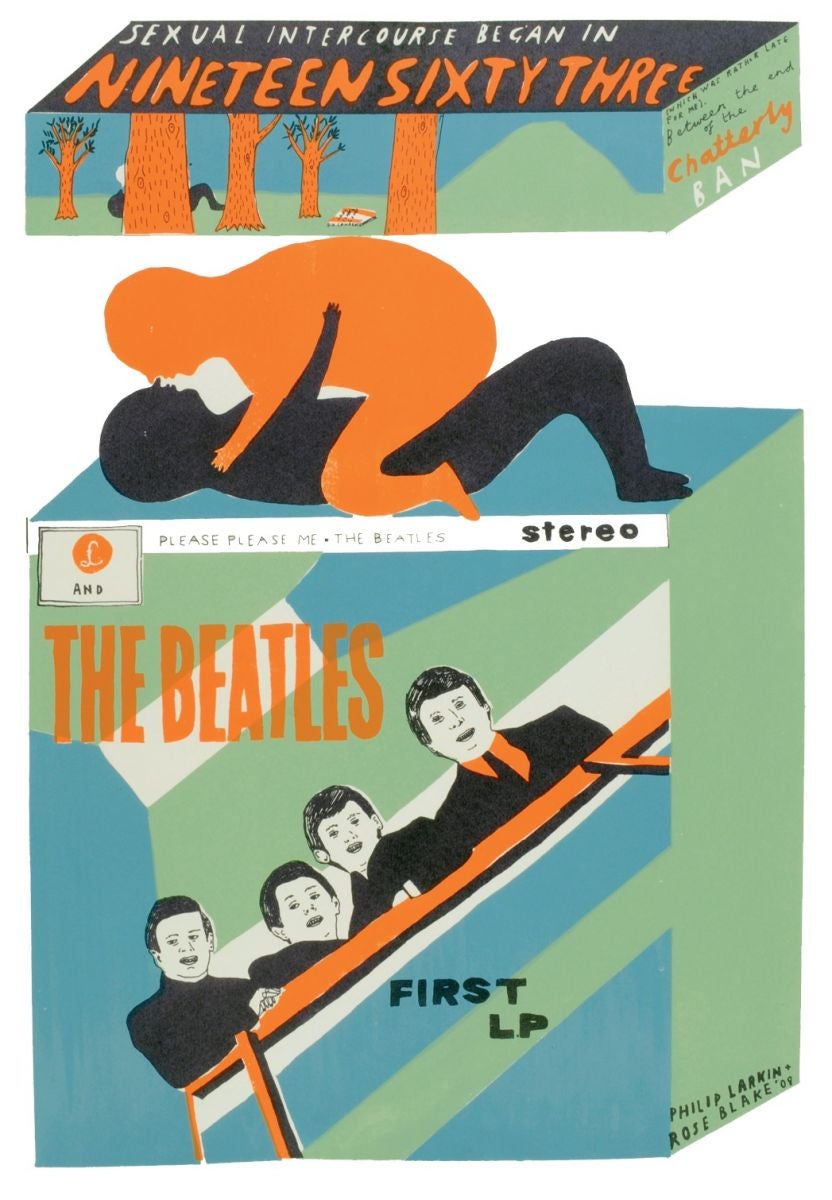 Get down with the common people: Annus Mirabilis, Rose Blake’s tribute to Larkin and the spirit of the Sixties. © Rose Blake

Mr William Deedes is an Old Harrovian, a member of the cabinet and the minister in charge of the government’s information services. Mr Deedes, it will be remembered, was one of those five ministers who interviewed Mr Profumo on that fateful night and were convinced by him that he had not slept with Miss Keeler. I remember thinking at the time: “If Deedes can believe that, he’ll believe anything.” And indeed he does! Listen to him on the subject of the Beatles:

They herald a cultural movement among the young which may become part of the history of our time . . . For those with eyes to see it, something important and heartening is happening here. The young are rejecting some of the sloppy standards of their elders . . . they have discerned dimly that in a world of automation, declining craftsmanship and increased leisure, something of this kind is essential to restore the human instinct to excel at something and the human faculty of discrimination.

Depeche Mode’s Dave Gahan: why I don’t understand my own band

Incredible as it may seem, this was not an elaborate attempt at whimsy, but a serious address, delivered to the City of London Young Conservatives. Not a voice was raised to point out that the Emperor wasn’t wearing a stitch. The Beatles phenomenon, in fact, illustrates one of my favourite maxims: that if something becomes big enough and popular enough – and especially commercially profitable enough – solemn men will not be lacking to invest it with virtues. So long as the Beatles were just another successful showbiz team, the pillars of society could afford to ignore them. But then came the shock announcement that they were earning £6,250,000 a year – and, almost simultaneously, they got the stamp of approval from America.

This was quite a different matter: at once they became not only part of the export trade but an electorally valuable property. Sir Alec Home promptly claimed credit for them, and was as promptly accused by Mr Wilson of political clothes-stealing. Conservative candidates have been officially advised to mention them whenever possible in their speeches. The Queen expressed concern about the length of Ringo’s hair. Young diplomats at our Washington embassy fought for their autographs.

The growing public approval of anti-culture is itself, I think, a reflection of the new cult of youth. Bewildered by a rapidly changing society, excessively fearful of becoming out of date, our leaders are increasingly turning to young people as guides and mentors. If youth likes jazz, then it must be good, and clever men must rationalise this preference in intellectually respectable language. Indeed, the supreme crime, in politics and culture alike, is not to be “with it”.

Before I am denounced as a reactionary fuddy-duddy, let us pause an instant and see exactly what we mean by this “youth”. Both TV channels now run weekly programmes in which popular records are played to teenagers and judged. While the music is performed, the cameras linger savagely over the faces of the audience. What a bottomless chasm of vacuity they reveal! The huge faces, bloated with cheap confectionery and smeared with chain-store makeup, the open, sagging mouths and glazed eyes, the broken stiletto heels: here is a generation enslaved by a commercial machine. Behind this image of “youth”, there are, evidently, some shrewd older folk at work.

And what of the “culture” which is served up to these pitiable victims? According to Mr Deedes, “the aim of the Beatles and their rivals is first class of its kind. Failure to attain it is spotted and criticised ruthlessly by their many highly-discriminating critics.” I wonder if Mr Deedes has ever taken the trouble to listen to any of this music? On the Saturday TV shows, the merits of the new records are discussed by panels of “experts”, many of whom seem barely more literate or articulate than the moronic ranks facing them. The teenager comes not to hear but to participate in a ritual, a collective grovelling to gods who are blind and empty. “Throughout the performance,” wrote one observer, “it was impossible to hear anything above the squealing except the beat of Ringo’s drums.” Here, indeed, is “a new cultural movement”: music which not only cannot be heard but does not need to be heard.

If the Beatles and their like were in fact what the youth of Britain wanted, one might well despair. I refuse to believe it – and so will any other intelligent person who casts his or her mind back far enough. What were we doing at 16? I remember reading the whole of Shakespeare and Marlowe, writing poems and plays and stories. At 16, I and my friends heard our first performance of Beethoven’s Ninth Symphony; I can remember the excitement even today. We would not have wasted 30 seconds of our precious time on the Beatles and their ilk.

Are teenagers different today? Of course not. Those who flock round the Beatles, who scream themselves into hysteria, are the least fortunate of their generation, the dull, the idle, the failures: their existence, in such large numbers, far from being a cause for ministerial congratulation, is a fearful indictment of our education system, which in 10 years of schooling can scarcely raise them to literacy. What Mr Deedes fails to perceive is that the core of the teenage group – the boys and girls who will be the real leaders and creators of society tomorrow – never go near a pop concert. They are, to put it simply, too busy. They are educating themselves. They are in the process of inheriting the culture which, despite Beatlism or any other mass-produced mental opiate, will continue to shape our civilisation.