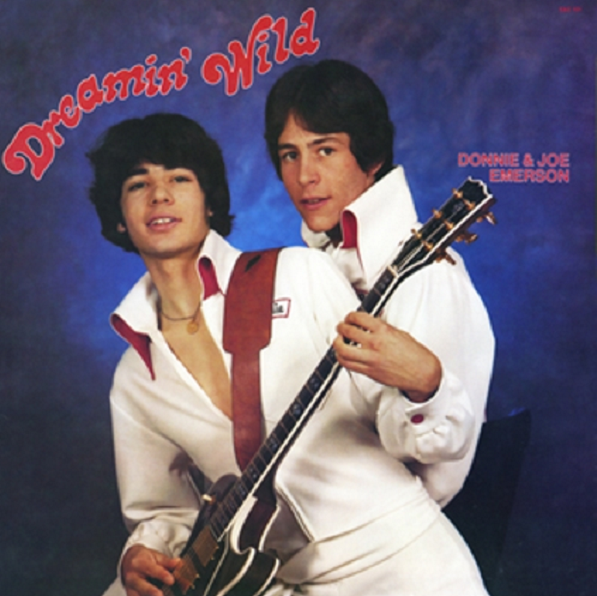 The artwork for Donnie and Joe Emerson’s “Dreamin’ Wild”

Last year, a book called Enjoy The Experience was published which highlighted the world of private pressings, albums which were often little more than vanity pressings, that flourished in the pre-CD era. Records were expensive things to record and produce back then – you had to be driven, you had to really believe in your vision to make it worth all the effort. Many private pressings were made with the highest hopes; one such was Donnie and Joe Emerson’s Dreamin’ Wild from 1979. Their parents, who believed totally in their sons’ musical ability, took out a second mortgage on the farm and invested $100,000 in building a recording studio and cutting the album. With sickening predictability, copies gathered dust, and the family had to sell most of their 1,600 acre farm in Fruitwood, Washington to cover their losses. Joe helped out with the family business, while Donnie briefly attempted a solo career in Los Angeles before returning home, bruised and beaten, his wild dreams now hidden away in a bedroom drawer.

Jump forward to 2008, when a record collector called Jack Fleischer discovered a copy of Dreamin’ Wild, with its distinctive cover featuring the brothers in home-made white jump suits, in a Spokane thrift store. He loved it, shared his love on the internet, and the album became an underground sensation. The highlights were long atmospheric pieces, seemingly recorded in a summer dust-storm; one track, “Baby”, was covered by Ariel Pink and the album was reissued in 2012 by Light In The Attic to much acclaim. Pitchfork described it as a “a godlike symphony to teenhood”, while the New York Times flew out to the Emerson family farm where both boys, mother and father were still located.

So what had happened after Dreamin’ Wild? The Emersons had just kept writing and recording and, more than three decades on, we have Still Dreamin’ Wild (with a rotten title, but lovely artwork), the pick of their Fruitwood recordings from 1979 to 1981, all previously unreleased. We now know they bought a drum machine and stepped gleefully into the American new wave era. Later, Donnie had a short stint in LA, trying to get an industry break, but otherwise the Emersons’ career – if you could call it that – seems to have added up to little more than selling their own cassettes and CDs door-to-door.

The lost-in-the-rain feel of the debut is replaced on Still Dreamin’ Wild by a clean streamlined synth backing. Anyone expecting more extended weird-outs like “Give Me The Chance” may be disappointed on first listen but this album is adorable, and somehow timely. The tremulous vocals are still there, always giving an impression of melancholy, no matter how upbeat the lyric, as is the circular, repetitive nature of their songwriting (try out “Since You Been With Me”). On the whole it’s far stronger melodically than Dreamin’ Wild, and suggests – which, hand on heart, I couldn’t say on the strength of the first album – that they were unlucky not to score a hit or two.

I’m assuming Rick Springfield and Hall & Oates were on heavy rotation on the radio in Fruitwood while these songs were coming together. I’m also reminded of the Searchers’ two late-bloom albums for Sire. On the whole, this is synth-driven powerpop, exemplified by the 1980-moderne “Stand By Love” (“with a click of the switch she’s on stand-by”). The production on the terrific “Don’t Fight” is reminiscent of Rod Stewart’s “Young Turks”, while the primitive rumble of “Big Money” sounds like the Emersons were maybe the only people who appreciated Fleetwood Mac’s Tusk first time around.

“One True Love” sounds like a Christopher Cross demo, sure enough, but melodically and sonically – in its airy, clipped way – it takes no great leap to imagine it playing today on 6Music, or even on Ken Bruce’s Radio 2 show. In the sleevenotes, Donnie Emerson describes the song as “the city as imagined from the farm”. It’s hard to imagine just how isolated the brothers were from the Burbank of Christopher Cross, or even how different theirs was to a regular suburban upbringing – Donnie had never even been on a bus at the time he wrote these songs. It was all one step removed, coming from a place where a kiss at a stop light, or even a simple bus ride, sounded impossibly romantic.

Like the strangest and most individual privately pressed albums, Still Dreamin’ Wild has an irrepressible self-confidence. In most cases this is due the artist having some unshakeable religious belief, or sheer mental blindness – few of the musicians could have written a Top 40 hit. In the case of the Emersons, though, they clearly had the ability, and knew it. Their naivety may be what gives their music its lightness of touch, but the same naivety meant few people outside of Washington State ever heard them until recently. Their rediscovery means they are now playing shows to appreciative crowds, mostly the teens and twenty-somethings that the songs were originally written for – only two generations later. It’s the best of happy endings.

Still Dreamin’ Wild is available from Light in the Attic on CD, LP, and limited edition blue vinyl LP with a bonus 7”