If you are not a teenage or pre-teen girl, this is what you probably think about boyband fans: they’re just little girls with a liking for unthreatening pretty boys; they dont care about music; all they want it something safe. To which it’s worth replying: safe for whom, exactly? Watching One Direction: This is Us (the Morgan Spurlock-directed 1D documentary), it doesnt look like in the middle of a crowd of Directioners is a very cosy place to be.

Actually, it looks terrifying. Small female faces break wide open with uncontainable emotion, their mouths twist and tremble. They cry, not decorous and moderate tears of gratitude, but the shocking, howling sobs of the frantic. And then there’s the noise. The noise would beat any normal person back: thousands of lungs emptying themselves in a simultaneous scream, a vast wail of wanting.

Harry, Zayn, Niall, Louis and Liam are accustomed to it, though – to a point. Sometimes, they toy with it like conductors of a dreadful orchestra: in Milan, they duck behind a balcony, listen to the noise subside, then leap up playfully to be met by another predictable rain of shrieks. But in Mexico City, Liam looks genuinely shaken at the noise which meets him when he steps out from behind a stack of amps in a half-empty stadium, hours before the show is due to start.

The noise is for them, but Liam’s alarmed face says that he knows there’s something in it that the band can’t control. In Amsterdam, they go shopping and get mobbed. After they’ve taken shelter in a Nike store, Liam tells the camera, “One of them had my ear and wouldnt let go. I think she wanted to keep it. I said, you can’t have that, its mine.” He laughs, but he’s holding onto his ear like he’s relieved to find it still attached.

The fans want them so badly they would rip them apart. This is a whole crowd with a common purpose: total individual possession of their favourite band member. I asked a friend’s teenage daughter if she wanted to come and watch the film. “No, I couldn’t,” she said firmly, “I’d be too jealous watching all those other girls meeting them.”

Most of these girls are too young for them to call this mad wanting lust. They wouldn’t recognise sex as the ultimate object of the feelings shaking them, and that’s the safety of the boyband crush. Fixating on someone securely unobtainable lets you practice all the wildness of desire without making too many mistakes, embarrassing yourself too badly or hurting anyone too much (Liam’s yanked ear is just collateral damage.) 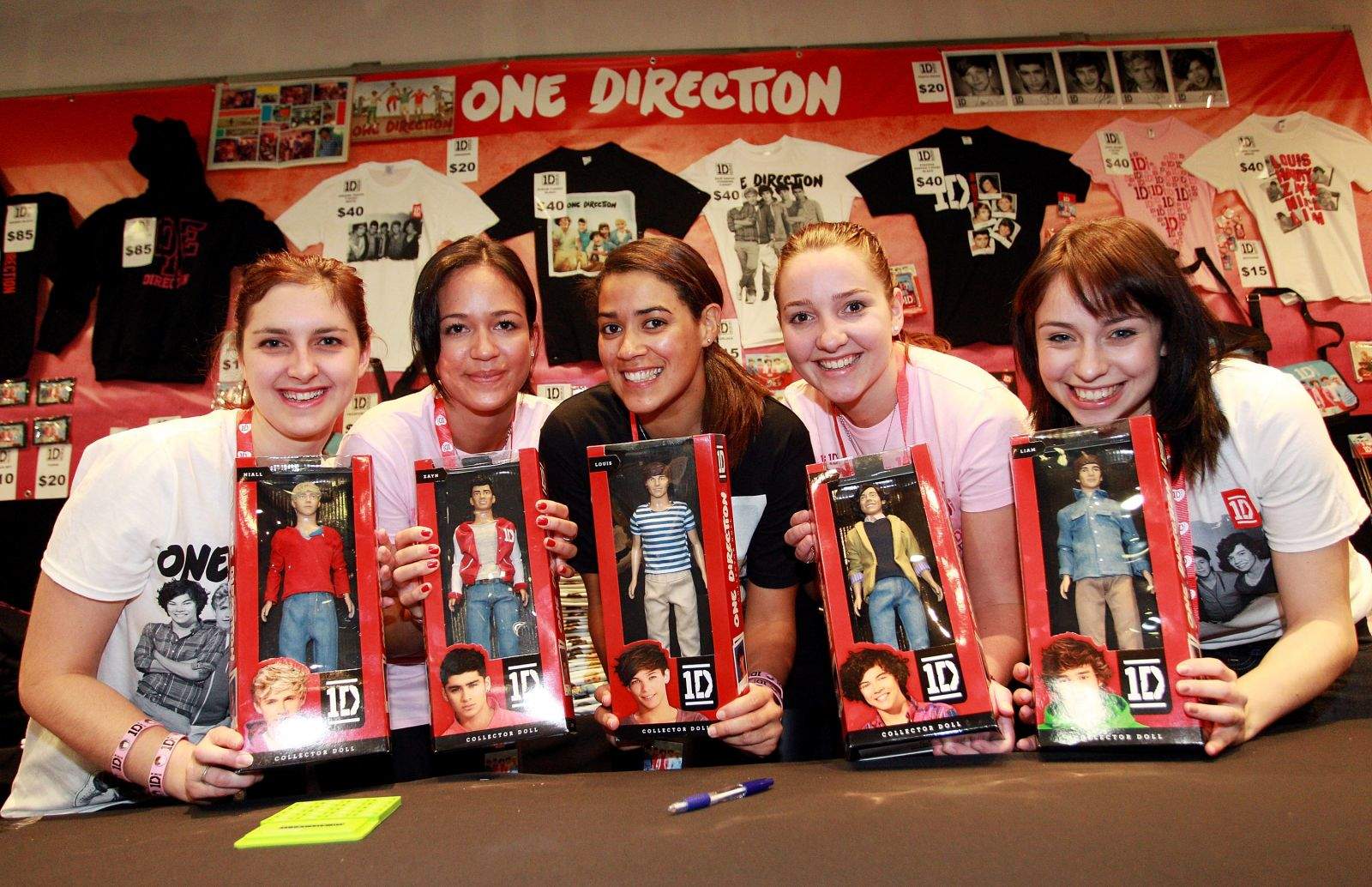 Elated staff pose outside an official One Direction store with merchandise

And though these passions are a way of playing at having adult feelings, they’re not disposable. A few weeks ago, I went to an open-air screening of Dirty Dancing. As Patrick Swayze appeared for the first time, approximately 2,000 middle-aged women exhaled Johnny as one, his the image imprinted on the gosling brain of their new-hatched lust some time in the 80s or 90s.

When I was growing up, it was Take That and Boyzone who inspired frenzy: some friends of a friend travelled from Chester to Ireland to camp on Stephen Gately’s mum’s lawn, because, well, contact with a few feet of distantly related turf was better than no contact at all. And when my mum was growing up, it was the Beatles. One of her most prized anecdotes is the one about the time an alarmed and ragged George Harrison, running away from fans (they probably wanted his ear), ran directly into her.

And before that Elvis, and before that Sinatra. As long as we’ve had mass media, we’ve had mass crushes on male stars. So why do still pretend that sex comes over teenage girls like some malignant force from outside? The dread word “sexualisation” is applied almost exclusively applied to girls and never to boys, and it suggests some kind of external process imposing sexuality on women. If girls never underwent “sexualisation”, presumably they would remain untainted by desire. Boys, meanwhile, are assumed to just know what they want and what to do, and if any education is needed, it’s to warn girls of this masculine menace.

This is transparently a disservice to children of both genders. But for girls, the damaging lesson they’re left with is that sex is something done to them, not something they do. If consent even enters into this debate, it’s as something girls can refuse: all the agency they’re offered is the chance to say no. Yes is taken away from them and replaced with a dull acquiescence to the incontinent urges of boys. Sex stops being a collaborative pleasure and becomes a grim tussle, with men trying to take it, and women charged with keeping it locked up.

But boys and girls have just the same mix of hunger and confusion, the same questions, the same need for answers from grown-ups. And while decorous adults refuse to acknowledge that girls are not just girls, but women in training, there’s a seven-decade-old industry predicated on the fact that girls will pursue a boy they like to the end of the universe. The grown-ups keep quiet, and those lungs keep emptying themselves in a howl of unrecognised need.