Not to get all philosophical about pop, but when Miley Cyrus starting singing “It’s our party, we can do what we want” in her MTV VMAs appearance, the question that comes to mind is: oh yeah Miley, whose party? Because by the time the We Can’t Stop/Blurred Lines medley is up, Cyrus has been stripped down to a supporting role in Robin Thicke’s show.

Dressed in latex pants and bra the colour of her skin, like the models in Blurred Lines’ Benny-Hill-goes-to-American-Apparel video, Cyrus ends up bent over in front of a suited Thicke, wiggling and hanging her tongue out the side of her mouth. Is what you want definitely such a close match with King Leer behind you, Miley?

Mind you, it’s turn and turnabout in the objectification stakes. Cyrus’s segment of the performance includes her bending over a black dancer and spanking her while singing the weirdly slow and mournful line: “To my homegirls here with the big butts/Shaking it like we at a strip club.” Oh we’re doing the Hottentot Venus thing now, are we? I haven’t run the full sums on my Is-This-Racist calculator, but preliminary estimates suggests that yes, this is pretty stinkingly racist.

In fact, if you wanted a six-minute guide to the prejudices of the entertainment industry, this performance has it covered: white men run the show, black men play support, all the women get mostly naked, and black women get to hold up the bottom of the objectification pile. It is, simply, horrible, and made worse by the fact that Cyrus looks wildly awkward. She’s at her best as a clowning comedian, a Disney Channel Lucille Ball, and can’t play the affectless wanton. No wonder Rihanna seems to be shooting her evils: Rihanna knows sexy, and this isn’t it.

But it is one of the only roles that’s available to female pop stars – certainly for Cyrus, who’s trying to get away from the country-pop sweetheart persona of Hannah Montana that Taylor Swift now occupies. “You’re a good girl,” croons Thicke ironically over Cyrus’s jiggling heiny, and what do ironic good girls do? They get nasty in exactly the way boys want them to, while the boys stay neatly clothed. It makes it drearily obvious just who’s in charge.

In this tedious atmosphere where everything tends to women ending up in their bras and pants, even Gaga’s giddying performance-of-performance for Applause ends up feeling null when it climaxes with her dancing in bra and pants. Hey, everyone’s naked today, Gaga. Next time try blowing my mind by wearing a three-piece suit or something. If the endgame is always a skinny white woman in her underwear, it doesn’t seem to make much odds what the hooks are or what wit and gameplaying goes into getting there.

Yes, but pop music is about sex, right? No: pop music is sexy, but that twitching force doesn’t always have to be driven into a dull pantomime of rutting, with available female bodies and smugly self-contained male ones. I cheered inside last year when Cyrus spoke up, saying “it’s ignorant not to talk to your kids about [sex] or [not] make it seem as magical or cool as it actually is.” The kind of sex on show last night? Not magical. Not cool. Not my party. 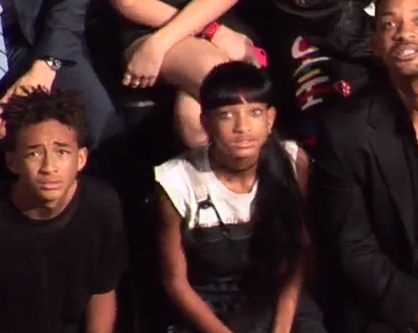