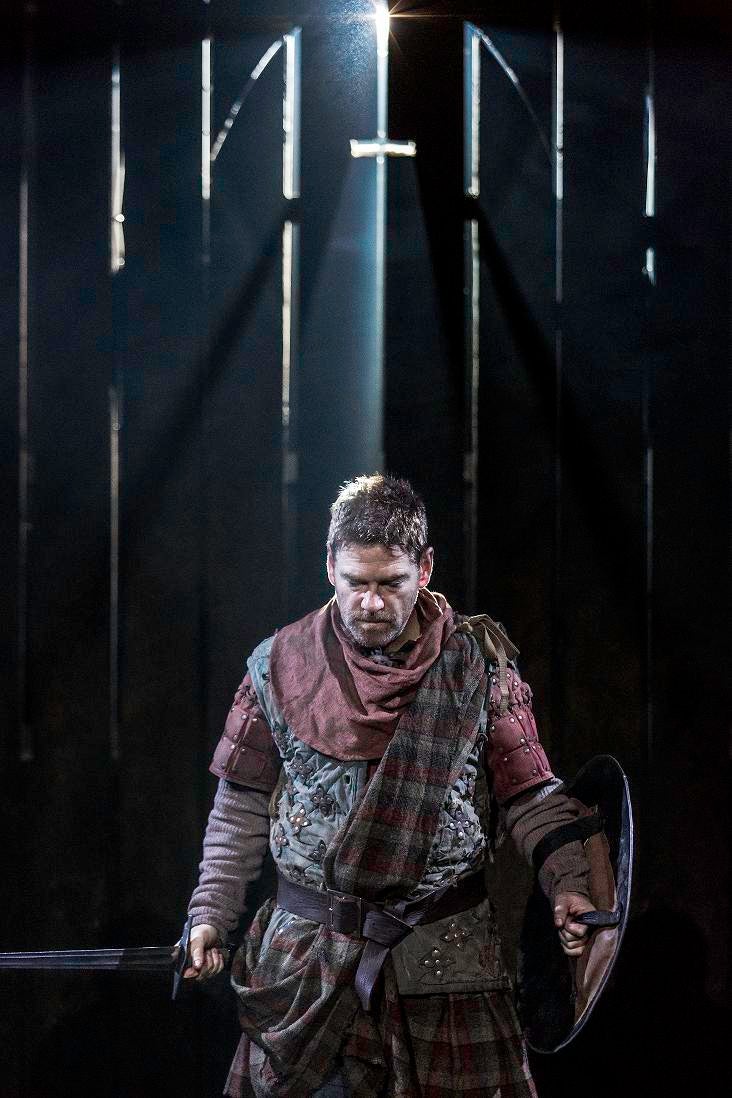 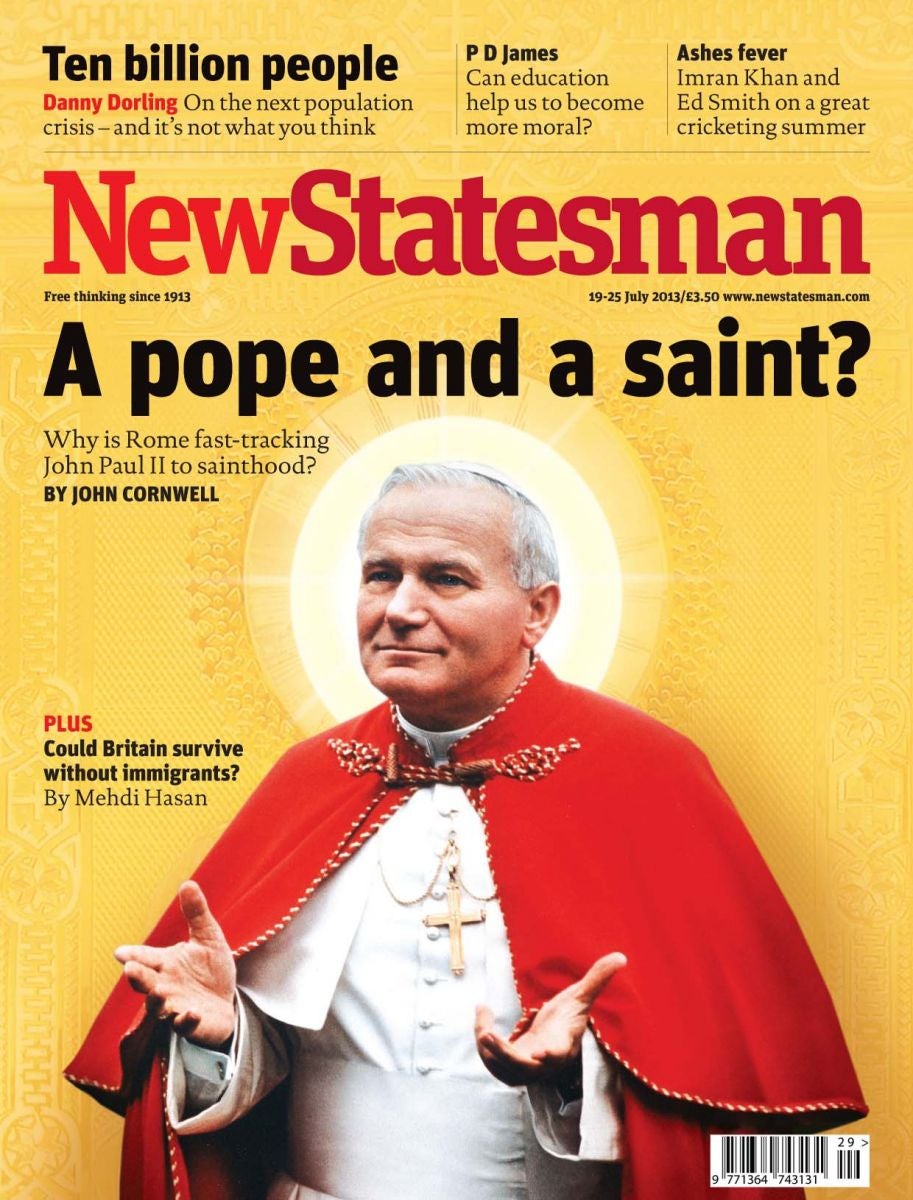 This article is from the current issue of the New Statesman, out today. To purchase the full magazine – with our signature mix of opinion, longreads and arts coverage, plus the cover story by John Cornwell on John-Paul II’s incipient sainthood, Danny Dorling on “Generation Peak-Teen”, a piece on what makes us human by P D James, and columns by Imran Khan, Laurie Penny, Peter Wilby, Rafael Behr, Will Self and Mehdi Hasan – please visit our subscription page.

In February I went to see James McAvoy, better known as a film actor and for his star turn in The Last King of Scotland, in the role of Macbeth at Trafalgar Studios in Whitehall, London. The setting was the near future, in an independent Scotland ravaged by war and technology failures and “too afraid to know itself” (the oil must have run out). McAvoy, who is 34, was a callow Macbeth, manic-eyed and energetically mobile – skidding across the stage on his knees, clambering up ladders, always hurrying, never at rest. His relationship with the even younger Claire Foy (as Lady Macbeth) was hesitant and even respectful. They did not seem like a couple enraptured by diabolical ambition and driven by sexual desire.

By contrast, when Kenneth Branagh’s Macbeth encounters his wife for the first time on his return from battle, he pulls her aggressively towards him and kisses her with vigorous intensity. Even as she tries to press upon him the urgent need to murder Duncan, King of Scotland (John Shrapnel), so that he may have the chance to become king, Macbeth turns his wife round, roughly pushes her up against a wall, rubs his crotch against her and then begins to thrust. They conspire breathlessly and can scarcely keep their clothes on. They even slightly resemble each other, both being pale-skinned and red-haired. And the stench of sex and death hangs in the air.

Rob Ashford and Branagh’s Macbeth, which ends its two-week run on Saturday 20 July, has been one of the outstanding attractions of this summer’s fourth Manchester International Festival. It is staged not in a theatre but in a deconsecrated Victorian church, St Peter’s, in the Murrays’ Mills district, a 15-minute walk from the city centre. The audience, just 260 people, sits on hard wooden pews either side of a long, narrow corridor, a bit like a racing paddock, where most of the action unfolds.

At one end is a raised altar on which many candles burn, and it is there that Lady Macbeth (Alex Kingston, excellent in a difficult role) stands from the beginning, her head covered and her back to the audience, until it is time for her to speak and bring news of the letter from her husband written after his encounter with the three weird sisters. At the other end is a wall, from which windows open, and from the top of which characters declaim, as if from castle battlements on high. Through these windows, or openings, the weird sisters first address Macbeth.

Branagh’s Macbeth is the third performance of the great tragedy I have seen since 2011 and certainly the most intense – it lasts two absorbing hours, without interval. In each production, the weird sisters were reimagined with special care. In the RSC’s Macbeth, at Stratford in 2011, the three were cast as blonde children, supernatural beings who had the faces of angels but wicked hearts. In the director Jamie Lloyd’s Macbeth at Trafalgar Studios, the sisters wore gas marks and appeared to be reading from iPads as they taunted Macbeth, who was as much their victim as he was the agent of his own destruction.

In Manchester, the sisters, all of them small and slightly built like children, are never far from view, appearing before the audience as Duncan is murdered, then as Banquo is murdered, again as Macbeth first believes he sees the ghost of Banquo at the feast, and then when, in a moment of calculated calm, he orders the murder of Lady Macduff and her children.

In the Manchester version, the sisters have blackened faces and thin, straw-like hair. They writhe in the damp mud, celebrating what they have willed or spun in a kind of sickening, masturbatory ritual.

No familiarity with the text prepares you for the extended opening scene: a ferocious battle in which many of the 25-strong company participate. In the text, the battle in which Macbeth distinguishes himself takes place offstage. But the co-directors, Branagh and Ashford, choose to show what is usually only told – not just the battle but also the murder of Duncan, after which Macbeth never knows peace again.

Just before his murder, Duncan wakes to find Macbeth crouching before him. The king seems reassured and fondly strokes the face of the man he has that day honoured. Then the dagger is thrust into him.

During the prolonged opening battle scene, rain pours from above and the mud beneath the soldiers’ feet congeals. It’s a warm evening outside yet inside it’s a Scottish winter. The players wear heavy period clothes, dressed for battle and for weather most foul. The audience sits very close to the action and those in the front row visibly recoil as the slain fall or are slammed up against the wooden pews, their swords mudspattered and blood-soaked.

It’s fascinating to watch an actor such as Branagh, so familiar from film and television, in close proximity. At the age of 52, he is still handsome, soft-lit by the aura of celebrity and hardened by fame. His hair is cropped short and his heavy stubble is gingery-grey. When he soliloquises a spotlight falls on his pale face and he looks tired, the perspiration gathering on his forehead.

There’s nothing self-conscious about his performance. He inhabits the role completely. In this, his first live Shakespeare run in more than a decade, he speaks clearly and naturalistically, as if some of the most celebrated poetry in English literature were fresh to him; as if he were speaking of his torment and regret for the very first time, as the character is, of course, if never the actor. And that’s the trick of it: to live in and through these never-returning moments of the play, to submit to the inexorable force of events.

Before seeing this production, I’d forgotten – or perhaps had never really noticed – that Macbeth disappears for a large part of the second half of the play, during which Macduff’s family is murdered and Macduff himself flees to England to join Duncan’s sons as they prepare to invade Scotland. Lloyd’s production attempted to solve the problem of Macbeth’s long absence from the stage by having McAvoy carry out the murder of Lady Macduff and her son in a gruesome scene, but it was one that, even in a play in which there’s so much killing, still felt somehow gratuitous.

When Branagh finally returns to the stage, you realise how much you’ve missed him. This Macbeth is ruminative and distracted, his mind “dis-eased”, as Branagh pronounces it: in killing Duncan, he succeeds only in killing himself, but until his death he cannot live as he would have wished or ever be at ease again. Branagh’s voice breaks as he speaks the final soliloquy of shattered self-recognition. He is half-weeping, half-sickened, utterly contemptuous. His end cannot come soon enough.

The final performance of “Macbeth” will be relayed to a screen in the Bridgewater Hall car park in Manchester and to cinemas nationwide on 20 July. More details at: mif.co.uk/event/macbeth-relay