Lindy West is no one’s idea of a shrinking violet. The Jezebel writer is mouthy – I mean that as a compliment – in a way that makes me feel incredibly British, like I should be ironing an anti-macassar and offering the vicar another Eccles cake.

In the last few days, she’s waded back into the debate about rape jokes, arguing that they contribute to “comedy not being a welcoming place for women”. That is true as both a general point, and a specific one: in July last year, Comedy Central stand-up Daniel Tosh thought it was totes hilair, after being heckled by a woman about earlier rape jokes in his set, to tell the crowd at large: “Wouldn’t it be funny if that girl got raped by, like, five guys right now? Like, right now?” (QTWAIN, Daniel Tosh.)

What Lindy West was not arguing was that rape jokes should be “banned” (however that would be accomplished – maybe Louis CK could issue the US comedy equivalent of a fatwa?) or even that all rape jokes are intrinsically wrong. She had written an earlier post on “how to make a good rape joke” citing Sacha Baron Cohen and several other male comedians making jokes where the underlying premise was something more sophisticated and interesting than “hur hur it’s funny because it actually happens to real people and it’s horrible”.

For example, here’s Sarah Silverman: “Needless to say, rape, the most heinous crime imaginable. Seems it’s a comic’s dream, though. Because it seems that when you do rape jokes that like the material is so dangerous and edgy. But the truth is it’s like the safest area to talk about in comedy. Who’s going to complain about a rape joke? Rape victims? They don’t even report rape. I mean, they’re traditionally not complainers.”

Depeche Mode’s Dave Gahan: why I don’t understand my own band

And here’s a supercut put together by the Women’s Media Center to demonstrate thoughtful versus thoughtless rape jokes:

So, to recap: what Lindy West was calling for was not an end to rape jokes, but better rape jokes. Remember how much better comedy became when we went from Jim Davidson and Roy Chubby Brown making jokes about race to Chris Rock and Reginald D Hunter? Yeah, that.

But, of course, this is the internet. And somewhere along the line someone decided that the best way to react to a woman you didn’t agree with was to joke about her being raped, or maybe even cut out the middleman and threaten to rape her yourself. You get bonus points if you throw in a little chaser about how she’s really too ugly to be raped, and should therefore be grateful for the compliment that is your erection. As it is forced inside her body.

West recorded a video of her reading out some of the comments and tweets about her since she entered the debate, and you can watch it here. She also screen-capped a few. 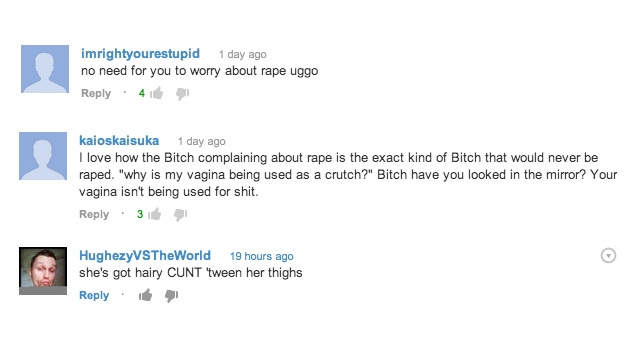 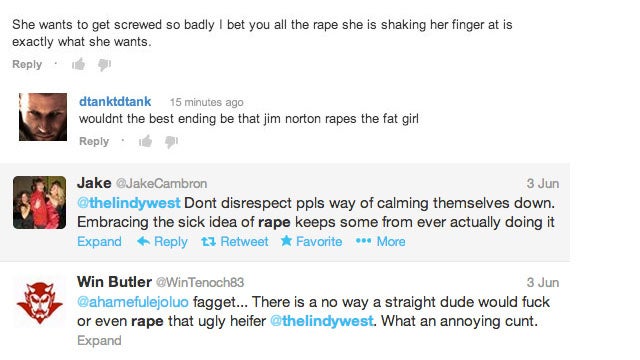 I just want to take a moment here and sit down, like Ole Granny Lewis, and say this: I’m 29. I can remember a time when people didn’t threaten to rape people for writing or saying something that they disagreed with. It is incredible that within a decade, this has become the go-to reaction for hundreds of thousands of young men (and, perhaps more incredibly, women).

The first time I encountered this was at university, in both meatspace and on Xbox Live, when “I totally raped you” became the standard banterous blokey way of glorying in a victory. I didn’t think all that much of it at the time, but when I asked female bloggers to write about their experience of online abuse in November 2011, it became apparently that The Rape Threat was the rallying call of a generation. If someone leaves themselves logged into Facebook and you post on their account, that’s “frape”. On Twitter, it’s “Twitrape”. Russell Howard did a bit on Mock The Week once where he said he liked to put his finger in people’s mouth when they were yawning. He calls this Yawn Rape.

I suppose in a way, this obsession with rape threats is a compliment to feminists. Because it’s the intrinsic power of the idea of rape, and the word itself, that makes it irresistible to both comedians and forum-dwelling mouth-breathers. Rape is still an everyday occurence, but we’ve made it shocking. We’ve made the case that the existence of rape is offensive, and to joke about it unthinkingly is offensive. We have given the word power.

Comedy fascinates me, because the boundaries are so fluid and there are no easily explicable rules. But here’s the general principle (nicked from Sarah Ditum, writing on a very different subject): offence in comedy is an icepick. You can use it to climb to the top of the mountain. Or you can bury it in someone’s skull. In other words, using an offensive word, or deliberately being offensive, is a tool: you can use it constructively to make the point you want to make, or you can be the guy that makes the four millionth Madeleine McCann joke that’s nothing more than “LOL DEAD CHILD LOL”.

(I wrote a bit here about offensive jokes I feel are justified, in case you’re interested.)

There are two takeaways from this debate. The first is: what the hell are we going to do about a generation of people who think it’s OK to casually threaten to rape people they’ve never met, just because they’ve expressed a view? The Internet Rape Threat Boom is obviously about power, just like rape itself. If a woman has an opinion, and your response is to reduce her to a vagina, your intention is clearly to demean her, to shame her, and to silence her. (And to exclude her: some internet communities seem to use rape chat like a “GURLZ NOT ALLOWED” sign on a treehouse.)

Just as rape is an expression of dominance over someone else – you are weak and I am strong – so the Internet Rape Threat has always seemed to me to be a way to tell women to know their place. Again, that’s a twisted compliment to feminism, because it means that some men feel threatened enough by the undoubted advances women have made that they feel the need to fall back on the one area in which the taller, stronger people with penises will always dominate. (cf the fact that these dudes never go for “I will totally continue to be over-represented in public life!” or “Your piece sucked, no wonder your gender comprises only one-fifth of MPs!” as an insult).

And I just don’t know what the answer is. When this stuff is tweeted at, or emailed to, a person, often other people don’t see it. Being abused on the internet is a peculiarly lonely experience, which is why it’s so shocking to see Lindy West reading out slur after slur about her weight and attractiveness. That kind of vitriol isn’t designed to be heard, but read. It’s unsettling to hear a voice attached to those words, even though I’ve seen them written a thousand times.

There is one thing that can be done, however. It would be a start if all the comedians dying on the barricades to defend crap rape jokes stopped to think: who do you want your fans to be? Do you want to encourage morons to think that simply barking the word “RAPE!” is the very essence of humour? Are you happy being the person who makes idiots feel justified in the kind of comments that have been directed at Lindy West? (And at Anita Sarkeesian, and at least a dozen other women I could name).

If you do, then accept that you’re the thin edge of the wedge. And at the fat end of the wedge is some guy on the internet, threatening to ram the wedge into any woman who dares to have an opinion.

Yes, that was kind of a rape joke.