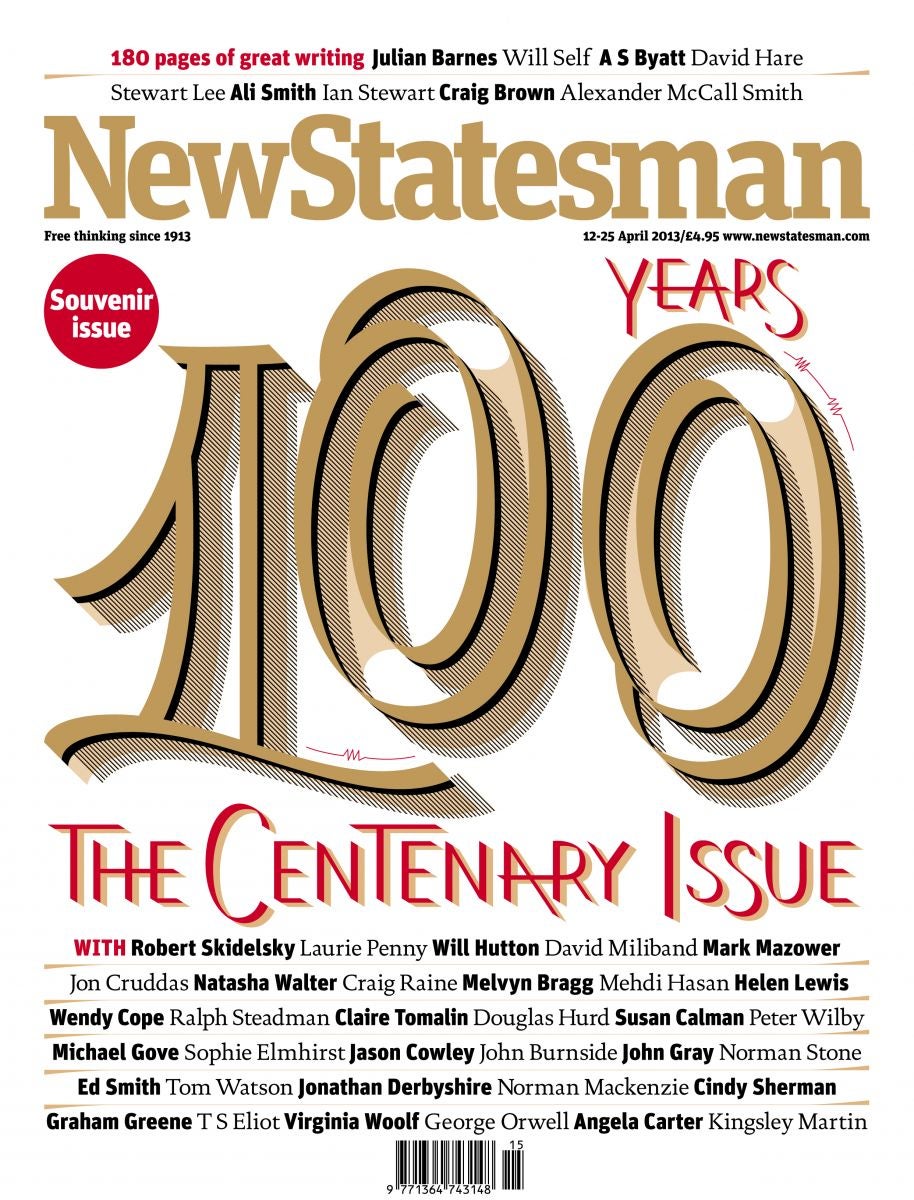 You are invited to read this free preview of the centenary issue of the New Statesman, out now. To purchase the full 180-page magazine – with an incredible array of essays, commentary, reviews, fiction and poetry by the likes of Boris Johnson, Ali Smith, A S Byatt, Mehdi Hasan, John Gray, Will Self and more plus republished material from the New Statesman archive by T S Eliot, Angela Carter, George Orwell, Graham Greene and others – please visit our subscription page.

Caroline Raphael, BBC Radio 4’s commissioning editor for comedy, recently confessed to difficulty in finding unashamedly right-wing comedians to balance the left-wingers on her shows. I know about stand-up only, not about comedy in general, but in my experience there aren’t really any right-wing stand-up comedians who would fit Raphael’s brief. You can’t programme something that doesn’t exist.

There are wits and humorists on the right, of course. The print-media comedy of Jeremy Clarkson, Rod Liddle and Richard Littlejohn, for example, amuses thousands of people. Under analysis, their prose reveals the reliably effective structures of traditionally funny writing. A demonstrably true political observation is gradually exaggerated for comic effect until it becomes absurd and then a wry conclusion, usually more appropriate to the exaggerated version of the initial fact than the fact itself, is appended to the piece by literary sleight of hand.

There’s no denying that this approach can draw laughs, though usually laughs of painful and bitter resignation, from the readership. Indeed, Clarkson’s right-wing comedy integrity was cemented in 2011 when he was described as “one of the few things worth watching on the Burqa Broadcasting Corporation (BBC)” by the Norwegian neo-Nazi mass murderer Anders Behr­ing Breivik, a man not known for his sense of humour but whose right-wing credentials are unimpeachable. Yet where are all the bona fide right-wing stand-up comedians and could any of them fit the Radio 4 brief?

Roy “Chubby” Brown, a northern club comic with brilliant timing and the ability to tap in to his working-class audience’s prevailing fears, tours vast halls beneath the critical radar. Chubby’s fans imagine that the Marxist media cabal sees him as too “politically incorrect” for broadcast. The BBC, however, is publicly accountable in a way that the label that sells Chubby’s CDs in service stations is not. The punchlines and end points of jokes on BBC comedy shows can be ridiculous for comic effect but the set-ups must reflect real facts or the BBC would face consequences.

Thus, this crowd-pleasing Chubby gag could not be broadcast: “You can’t say anything about religion these days, can you? They say you can’t say ‘Protestant’, you can’t say ‘Muslim’, you can’t say ‘Jew’. Which is a shame, because I like to go in my news­agent on a Sunday morning and say, ‘Here’s a quid. Keep the change, you Paki bastard.’” The set-up is based on an erroneous assumption about religion and political correctness (you can say “Protestant”, “Muslim” and “Jew”) and has no etymological relationship to the discussion of racist language that the pay-off seems to be addressing, though the punchy brutality of Chubby’s performance swiftly and convin­cingly papers over the logical cracks.

Many Chubby jokes about supposedly controversial material proceed from similarly unsubstantiated tabloid myths. Even the most dogmatically leftist Jeremy Hardy jokes have at least some of the BBC’s required basis in news fact. Chubby does have a funny hat, though. Hardy doesn’t even have a hat.

Would any of our popular arena come­dians fit the right-wing stand-up bill? The Daily Mail inexplicably demonises Jimmy Carr and Frankie Boyle as “politically correct left-wingers”, yet to sensitive souls they appear callous, apolitical nihilists. Carr’s jokes about the disabled and his tax avoidance undermine the idea that he is politically correct. You can’t make sense of their acts politically, but imagine them (and their unseen writing teams) not as rounded characters with backstories but as arch saloon-bar wits, trying out a succession of controversial, sometimes contradictory positions for fun, and they become coherent. Carr flirted with the idea of being a liberal satirist on Channel 4’s Ten O’Clock Live, a former marketing man expanding his post-pub customer base into the Guardian green belt. Perhaps Carr might wear a right-wing hat for Radio 4 if the money was right, which it wouldn’t be, but Boyle is too likely to be bluntly anti-war or pro-Palestinian to help Radio 4 out of its Trotskyite ghetto.

Al Murray’s patriotic Pub Landlord, though a favourite on BNP internet discussion boards, is in reality a satire of the Little England mentality and so he would not help Radio 4’s right-wing quota. Jim Davidson is avowedly right-wing but seems to want the respect and friendship of trendy liberal comics while racially and homophobically abusing them on his blog, and is currently under investigation anyway, due to his links to the 1970s. I doubt his News Quiz seat is being kept warm. Henning Wehn and Liam Mullone occupy broadly libertarian positions and would please the right with their common-sense fiscal comments but confuse it with their views on individual freedom and use of irony.

In the Spectator, Liddle suggested the actor Alexander Armstrong as a right-wing alternative to Jeremy Hardy on Radio 4, presumably because he is a member of the Notting Hill set – but Armstrong hasn’t written any comedy this century and has never performed authored stand-up, being principally an amusing mouthpiece for other writers’ jokes and advertisers’ sales pitches. Is the best we can suggest in a search for a right-wing comedian just a celebrity whose friend’s sister is George “Pencils” Osborne’s wife?

Will anyone make up the right-wing stand-up comedian numbers? Since I started in the late 1980s, there have always been stand-ups who appear to be right-wing, but usually are upper-middle-class liberals who, realising that they can’t help their accents, have chosen to take on the role of a kind of out-of-touch, paternalistic Tory “posh boy”. The slit-eyed Simon Evans, whom you may have seen on a big TV stand-up showcase, is the funniest and the most committed of these, hating football fans, working-class women who dress like prostitutes and anyone who has more than two children. Particularly good over short distances, Evans nevertheless inhabits his stage persona so completely, convincingly and hilariously that I assume it must on some level overlap with his beliefs. Whether he is a real Tory or a pretend one, Radio 4 could do worse than make the unflinching Evans the official voice of the comedy opposition.

The stand-up Jerry Sadowitz’s apparent distaste for Islam, feminism and Nelson Mandela might appear to place him at the right end of the political spectrum and his language would keep him off Radio 4, but because Sadowitz is one of the most complete and perfect stand-ups in history, his exact political position is complicated. By accident or design, he appears to be socially, sexually, culturally, physically and economically at the bottom of the pile. This gives him licence to attack everything and everyone, like a drowning rat swimming desperately up the U-bend. And this tells us a lot about the essence of stand-up.

Stand-up comedians are not the same as wits and columnists and humorists. Strip away the showbiz and a pure stand-up is still a turn, a music-hall act. It’s clowning, and clowns are always tragic figures. Clowns’ comedy came from the inevitability of their defeat, from the gulf between what they want – whether it’s sex with their bored partner or a socialist utopia – and what they are going to get, which is nothing, nothing and a kick in the goolies. Interestingly, in the early years of the Pub Landlord, Murray alluded to how the publican’s reactionary beliefs had been compounded by domestic troubles in his past, lending him a comically effective low status that was inevitably compromised by the character’s subsequent huge popularity. Josie Long is one of the most determin­edly left-wing stand-ups working today, hated by armies of internet trolls. For me, what has improved her act even further lately is her creeping acknowledgement that the character she inhabits is involved in a self-mythologising, romantic and perhaps doomed struggle against capitalism, compromised by her frailties. In her solo show last summer, Long maintained that she’d missed the heroic chance to live the leftist legend and be arrested at a sit-in on an anti-Vodafone demo, having been distracted in Soho by a Thai buffet. Character and failure inform the theorising. And, love him or loathe him, Jeremy Hardy does not sound like a happy or powerful man. His corduroy candy mountain crumbled in the 1980s. He is destined to whinge into the dying of the light. That is his tragedy. That is his clown.

Ultimately, the left will lose. Big business will pollute the planet, capitalist culture will kill off the arts and humanities, schools will all be privatised, libraries will all close, social mobility will cease, the gulf between rich and poor will grow and everything beautiful will die. The left may note little human rights victories – gay marriage and the odd bit of better pay – but the machine is rolling inexorably forwards to crush it.

The African-American stand-up Chris Rock maintained that stand-up comedy should always be punching upwards. It’s a heroic little struggle. You can’t be a right-wing clown without some character caveat, some vulnerability, some obvious flaw. You’re on the right. You’ve already won. You have no tragedy. You’re punching down. You can be a right-wing comedy columnist, away from the public eye, a disembodied, authoritarian presence that doesn’t need to show doubt. Who could be on a stage, crowing about their victory and ridiculing those less fortunate than them without any sense of irony, shame or self-knowledge? That’s not a stand-up comedian. That’s just a cunt.

Stewart Lee has curated “The Alternative Comedy Experience” for Comedy Central (Tuesdays, 11pm). Tickets for live dates are on sale at: stewartlee.co.uk