An hour into Triangle of Sadness – the second consecutive film by Swedish director Ruben Östlund (following The Square in 2017) to both win the Palme d’Or at Cannes and include a shape in its title – a minor character is introduced. We have already met Carl (Harris Dickinson), a disgruntled British model, and his triangle of sadness: the crease that appears on the bridge of his nose when he frowns. What could a strapping young hunk have to frown about? Only that his girlfriend, the influencer and fellow model Yaya (Charlbi Dean), earns more than he does, yet still lets him pick up the bill when they eat out.

Her success has brought them a free cruise on a luxury mega-yacht. (The film was shot partly on the 99-metre Christina O, originally the property of Aristotle Onassis, who upholstered its bar stools in whale foreskin.) Fellow passengers include a Russian manure magnate (Zlatko Buric) and a benign elderly couple (Amanda Walker and Oliver Ford Davies) who made their billions selling grenades to war-torn countries.

Carl is insecure enough already, but when Yaya starts making eyes at a shirtless crew member, he loses what little cool he had. That’s when the film’s guest star arrives: an insect darting between the sun loungers, its buzzing growing louder the more agitated Carl becomes. This is only a fly-on part (another bug appears near the end) but it continues a pattern of scenes destabilised by trivial elements. At Carl’s modelling audition, there is a Boston terrier sat in the middle of the floor for no apparent reason. The same disruptive purpose is served elsewhere by the sound of a baby wailing at dinner, a windscreen wiper squeaking during a tiff, and a woman whose aphasia causes her to repeat the same phrase (“In the clouds”).

Triangle of Sadness takes the form of a triptych, with a burst of red light seen in each section like a warning. In its first third, Carl and Yaya’s strained relationship is scrutinised in plush settings: fashion show, swanky restaurant, hotel. The second is confined to the cruise, where the sloshed captain (Woody Harrelson) locks himself in his cabin, which feels less like a comic device than a way of working around a Hollywood star with limited availability.

When he does appear for dinner, chaos breaks loose – first from the heavens, in the form of a violent storm, and then from the mouths of the seasick passengers. What’s nauseating about this sequence is not its extremity (a mere wafer-thin mint compared to the Mr Creosote episode in Monty Python’s The Meaning of Life), but Östlund’s decision to show only the ageing or unattractive characters losing dinner and dignity. Carl and Yaya are nowhere to be seen; heaven forbid the beautiful people should be made ugly. For a film that aspires to be a satire of superficiality, this is an inexcusable pulling of punches, an endorsement of the values it affects to despise.

Early in the trip, the chief steward Paula (Vicki Berlin) tells her staff that the final day of a cruise should always be the most memorable. The director has heeded this advice by making his film’s concluding third, set on a desert island, its only effective one. It replays The Admirable Crichton, with the Filipina actor Dolly de Leon bringing craft and cockiness, as well as economic, racial and sexual warfare, to the Kenneth More role of a lackey who is suddenly made lord.

The rest of the cast are also game. Dickinson makes Carl just smart enough to know he isn’t smart enough. Dean’s subtle comic snark hints at a promising future that was lost when she died earlier this year, aged 32. Buric is an agreeably boisterous presence saddled with some crude, unplayable scenes. In a morbid spin on From Here to Eternity, he cradles his wife’s corpse in the surf, then impassively removes all her jewellery. Who knew the 1 per cent were so materialistic?

When a director’s brand is cynicism, every choice can seem calculated for effect over meaning. No wonder the insect that was bothering Carl seems like an on-screen surrogate for Östlund, who has always styled himself as a fly in the ointment. It would be instructive, though, to know where exactly he believes the subversive content resides in the film. To these eyes, it’s a case of too much ointment and not enough fly.

“Triangle of Sadness” is in cinemas now

Topics in this article: Film reviews 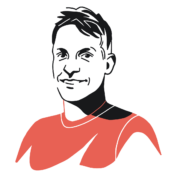 Ryan Gilbey is the New Statesman's film critic. He is also the author of It Don't Worry Me (Faber), about 1970s US cinema, and a study of Groundhog Day in the "Modern Classics" series (BFI Publishing). He was named reviewer of the year in the 2007 Press Gazette awards and is Film Critic in Residence at Falmouth University.