There are many terrible things about King Arthur: Legend of the Sword, Guy Ritchie’s take on Arthurian myth, so many in fact that while watching it I rather gave up counting them and amused myself instead by coming up with alternative titles that might better reflect the film’s geezerish, bombastic and uniquely unsubtle nature. Lancelot Du Lad, say. Excalibants. Famalot.

The unvaryingly shouty performances are hard to tolerate, as are the mannered, breakneck montages in which one laddish character or another gives a précis of a particular tale or anticipates the manner in which they see a situation panning out (a stylistic digression familiar from Ritchie’s other work) in the fashion of a shaggy-dog story recounted from a bar-stool. There is only one thing in the picture that really stands out to me as original or interesting: as Arthur, Charlie Hunnam has one splendid moment, no more than a few seconds long, in which he pants openly in the moments following a fight. No dialogue — just panting, while he catches his breath again. There’s something you don’t see very often. No one involved in fisticuffs in the movies ever looks remotely winded, at least not if they’re the victor. So hats off to Ritchie for that, and that alone.

In a poor film, the use of David Beckham in a minor but significant role stands out as an own goal. It’s a towering misjudgement and a good example of the way filmmaking for Ritchie is really just an extension of socialising. You get your mates around you, have a few drinks and a few larks and Bob’s your uncle. Or Becks, in this case.

No director who truly had his eye on the ball, and was considering the good of the film, would ever have countenanced the casting of Beckham in what is the key scene in the movie: Arthur’s retrieval of the sword Excalibur from the stone in which it is encased. This is the point in the story at which Arthur’s destiny is made manifest. His act singles him out as unique and changes the course of his life. So what is Ritchie’s response to dramatising this pivotal moment? Stick Becks in there to distract the audience’s attention away from this transformative point in the hero’s story. This on its own would be proof enough that Ritchie is not any kind of film director, even if there were not already 20 years’ worth of other movies to be taken into account. 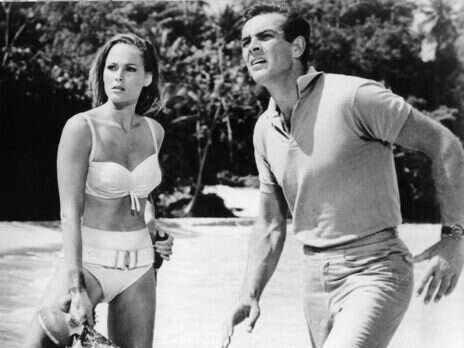 I know Beckham and Ritchie are buddies. I get it. I got it before he gave him a walk-on in his last film, The Man from UNCLE. But I don’t go to the cinema to watch other people’s home movies. It might be considered a nice touch that Ritchie partially disfigures his friend’s beautiful face with an unsightly and angry-looking scar. But that only serves as an extra distraction within the larger one of having Beckham in the picture at all. Now the viewer thinks: Is that David Beckham? It is David Beckham! Wow. How funny. And they’ve put a horrible scar over his face. Oh, that’s good. He’s usually so pretty and here he is looking slightly less so. Very droll.

Meanwhile, to the right of the frame, Arthur has just pulled the sword from the stone while the viewer is getting over this celebrity cameo. It’s only Excalibur, though. No biggie.

‘King Arthur: Legend of the Sword’ opens on Friday.