Many a modern author could learn the art of writing an arresting opening by reading the prologue of Le Livre de la Chasse (“The Book of the Hunt”). The book is not a romance of courtly love but a manual for aristocratic huntsmen written between 1387 and 1389. The author starts boldly: “I, Gaston, by the grace of God, named Fébus, count of Foix, lord of Béarn… have especially enjoyed three things: arms, love and hunting.” However, he then goes on to disparage his skills in two of those theatres of action. “Far better knights have been than I am, and many people have had more fine adventures of love than I had… It is of the third office, which I doubt having any master, as vain as it sounds, I want to talk about, that is to say the hunt.”

This last wasn’t a hollow boast and Gaston Fébus’s work became the most widely disseminated and important hunting book of the Middle Ages and beyond. The manuscript was translated and expanded by Edward, Duke of York as The Master of Game (1406-13) – considered the earliest English-language book on hunting – and so accurate were Fébus’s descriptions of animals and their behaviour that, as late as the 18th century, the naturalist Georges Buffon used them wholesale for his pioneering and hugely influential Histoire naturelle (1749-88). 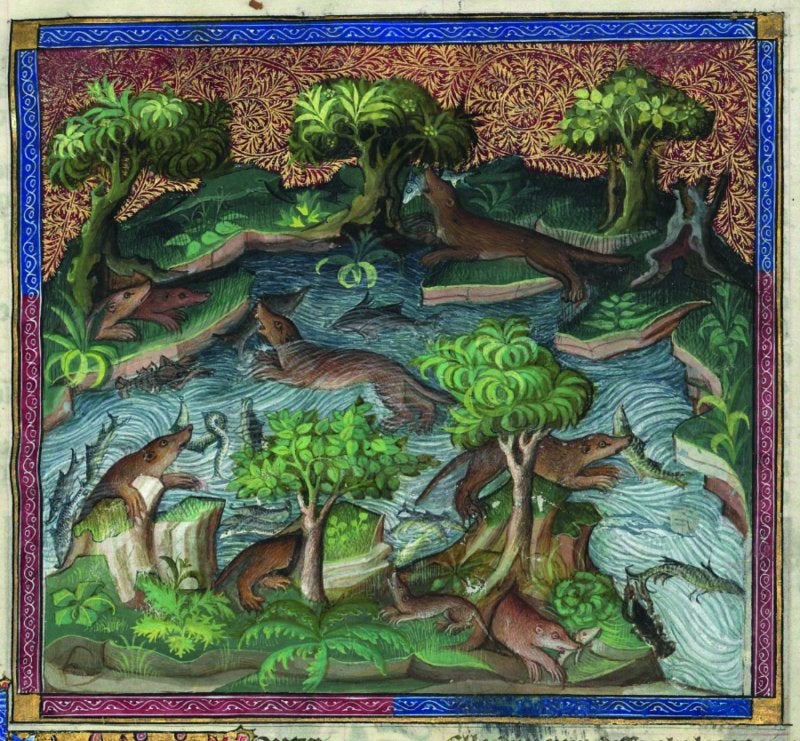 The original lavishly illustrated manuscript was given by the count (known as Fébus or Phoebus, the sun god Apollo, because of his golden hair) to Philip the Bold, a fellow huntsman and the youngest son of the king of France. If not the gift of an equal, then it was the gift of a peer; Fébus was the independent ruler of a swathe of Pyrenean territory that was contested by four monarchies – France, England, Navarre and Aragon. The count spoke Gascon rather than French and the chronicler Jean Froissart records him explaining why he hadn’t taken sides in the war between England and France: “I hold my land of Béarn from God… And so I have no business going into service, and no quarrel with one king or the other.”

He did, however, have a quarrel with the House of Armagnac, which came to a head at the battle of Launac in 1362, when he captured Jean d’Armagnac and other enemy commanders and subsequently ransomed them for the fabulous sum of 600,000 florins. Victory was not the end of his troubles. His son and heir, also called Gaston, was bribed by Charles II of Navarre to poison him but was caught and imprisoned; at some point in his incarceration, the count and his son fell into a violent argument during which Fébus stabbed his son to death. The tragedy was later compounded when his favourite son, the illegitimate Yvain de Foix, burned to death when his costume caught fire at a masquerade given by the Queen of France. 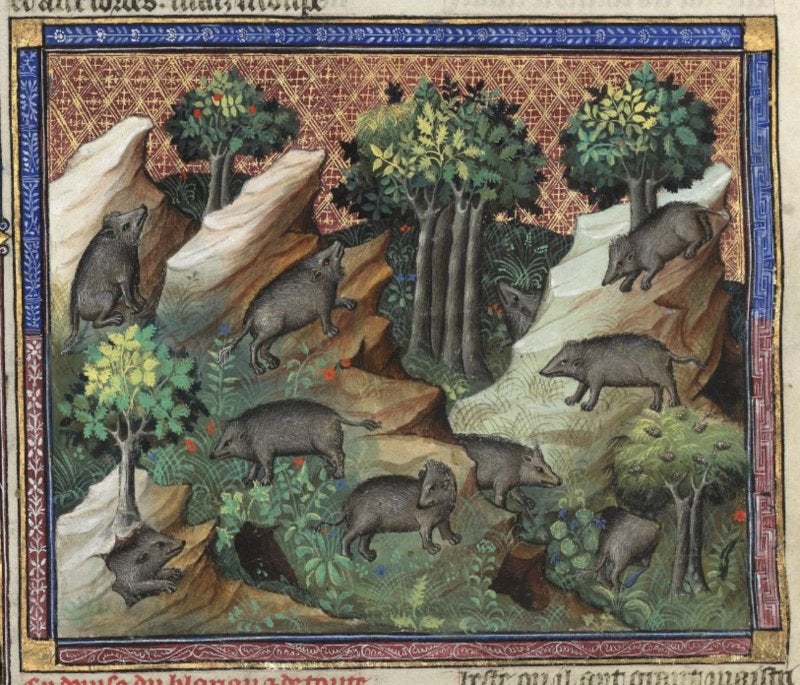 Hunting, therefore, was both a passion (he even travelled to Sweden to hunt reindeer) and a diversion from his dynastic travails. For the medieval nobleman, the chase was more than a sport; it was also a highly choreographed art form with its own complicated and strict etiquette; an assertion of man’s superiority over the natural world; a form of kinship with God’s creation in which men, dogs (Fébus had kennels for 1,600 hounds) and hawks worked in harmony; and a form of religious observance, with hunts linked to religious feast days.

There are some 44 existing early copies of the manuscript, with four in particular of outstanding magnificence. It is not known which, if any, is Fébus’s presentation copy, but the most jewel-like of them all, containing 87 miniatures, is known as MS Français 616 in the Bibliothèque Nationale de France. The illustrations carefully follow the text, which is divided into four main sections: “On Gentle and Wild Beasts”, “On the Nature and Care of Dogs”, “On Instructions for Hunting with Dogs” and “On Hunting with Traps, Snares and Crossbow”. Although Fébus recognised that less fortunate souls needed to catch animals for meat (and so discussed snares, traps and pits) his main concern in the book was how to take game “nobly and with gentility”, and this meant primarily hunting à force: that is, on horseback with hounds.

The miniatures are the work of at least three different artists, most likely associated with the workshop of the Master of the Duke of Bedford. Their style, a combination of close observation and rich decoration, exemplifies what used to be known as international gothic and is perfect for depicting the ritual nature of the hunt. Their miniatures show not only the types of animals pursued – deer, wild boar, bears, wolves, foxes, otters and wild cats – but also the human hierarchy of nobles (mounted, richly caparisoned and often shown full face), huntsmen (sometimes minor nobles themselves and frequently on horseback) and assistants (humbly dressed, on foot and in profile). The span of the hunt and its rituals are described from the preparatory breakfast to the unmaking (dismembering) of the prey; the different terrains favoured by the creatures are distinguished; and the characteristics of the animals are accurately recorded too (a female hare, for example, is shown suckling two leverets – rabbits have larger litters). 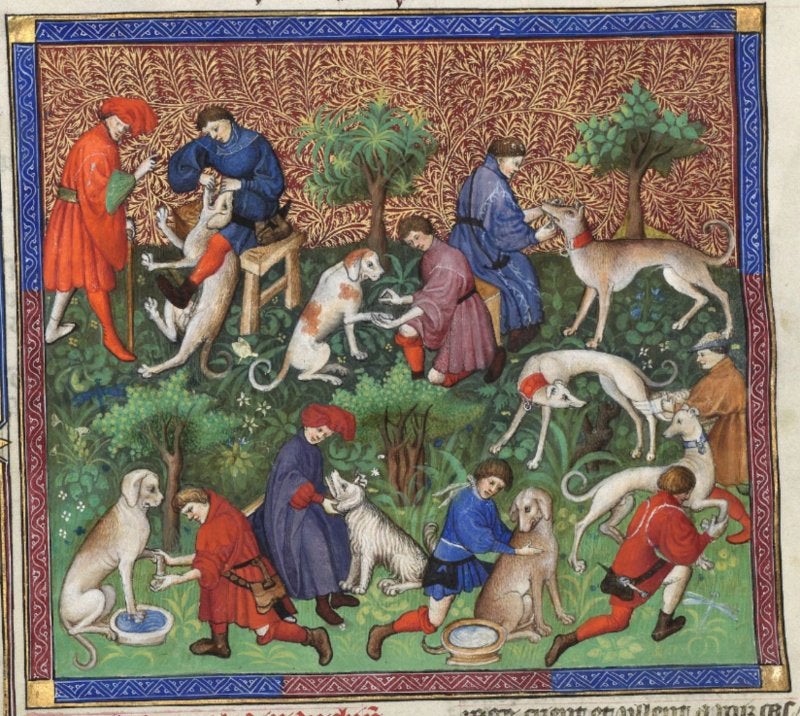 The landscapes in which the action takes place are only partly naturalistic, with woods and broken countryside predominating, but with no attempt at perspective and with skies usually shown as a mosaic of gilded squares. This was in part to give the animals and hunters primacy, but also because the hunt traditionally took place in parkland specially designed for the purpose. These parks could extend for hundreds of acres, removing land from profitable agriculture to create ideal pleasure grounds – a man-made paradise – for aristocratic performance. Fébus was therefore not just lord of Béarn and Foix but of Nature itself. In this he followed the biblical injunction to show dominion “over all the Earth, and over every creeping thing that creepeth upon the Earth”. So the landscapes in the miniatures are religious settings too – a prelapsarian realm, an Eden where Fébus could hunt while Adam delved and Eve span beyond view.

Fittingly, Fébus’s death was associated with the chase; although he should by rights have died in the saddle or by the tusks or antlers of his prey, in fact he perished from a stroke suffered while washing his hands after a bear hunt.

This article appears in the 05 May 2021 issue of the New Statesman, If not now, when?