She warned us when The Handmaid’s Tale appeared: none of this was new; none of this was impossible. Ask Margaret Atwood if she writes science-fiction and you will get a somewhat frosty reply; she never puts anything in her novels that hasn’t already happened somewhere, or will happen quite soon. Followers of her MaddAddam trilogy, published over the course of a decade between 2003 and 2013, may recall reading about transgenic pigs and lab-grown meat in her fiction long before stories about these scientific advances appeared widely in the news.

But since the election of the 45th president of the United States, this 34-year-old novel, a sometimes dutifully-read staple of A-level exams, has been strikingly reilluminated. When it was published in 1985, Atwood’s repressive, patriarchal Gilead seemed to readers as far in the past as it did to the participants in the academic symposium which appears at the novel’s end, a couple of hundred years after the fall of the Gilead regime. But at the global launch of Atwood’s follow-up, The Testaments, the author noted the political forces that continued to shape the reception of her book.

She and I are sitting on stage at the British Library, where I find myself the compère of what can only be called a literary circus. One hundred and forty five journalists have come from 14 countries to listen to Atwood, who will be 80 this year, and is perky and bright-eyed, despite having been up into the small hours the night before. Waterstones Piccadilly held a midnight event to launch the book: Jeanette Winterson, Elif Shafak, Neil Gaiman and others discussed her work, there was a reading from Atwood at the stroke of twelve – plus embroidery and cocktails, because: why not? (“London loves a happening,” as Atwood said, dryly.)  A week later it is announced that The Testaments has sold more than 103,000 copies, making it the biggest hardback fiction title of the year by a country mile.

Atwood is dressed in black, as she often is, but her nails are spring green in tribute to one of the new costume choices in The Testaments (“Did you see Triumph of the Will?” she asks, referring to Leni Riefenstahl’s Nazi propaganda film. “These kinds of regimes are very big on outfits”). She has recalled beginning The Handmaid’s Tale in what was then West Berlin, in 1984; the question she asked herself was: “Would I be able to persuade readers that the United States had suffered a coup that had transformed an erstwhile liberal democracy into a literal-minded theocratic dictatorship?”

The answer was yes: but what came after changed the perception of the book. “Until the Wall went down, the United States was selling itself as the alternative to the Cold War evil empire,” she says now. “So they were the land of freedom, democracy, equality, opportunity for all. They were therefore not showcasing their shadow side, which was kept pretty firmly under wraps in those days. But once that opponent was gone, everything could come out of the cupboard that had always been there – and out it has come.”

Out it has come indeed. The vice president of the United States, Mike Pence, won’t eat alone with a woman who is not his wife lest he fall prey to temptation; in 2019 alone nine states passed bills to limit access to abortion. Atwood says she began thinking about re-entering the Republic of Gilead in 2015 – prompted both by queries from readers over the years and the changing state of the political landscape. Then came the development of Bruce Miller’s atmospheric – and hugely successful – television adaptation of The Handmaid’s Tale; the first season launched in the spring of 2017, but by then something had shifted. She recalls the chronology, particularly as it relates to the show, in vivid present tense.

“The election” – of President Trump – “happens November of 2016, at which point everybody in the cast and team of the show woke up and said: ‘We’re in a different show.’ Not that anything in the show changed: but the frame changed.”

It was that change of frame that led to the Handmaids’ appearance in the real world: women dressed in home-made versions of the Canadian costume designer Ane Crabtree’s red cloak and face-concealing white hood showing up to protest discriminatory legislation. “This wave of it started in Texas,” Atwood recalls now, “where an all-male legislature group” – the Texas senate – “was bringing in more laws about women’s bodies.” She smiles. “It’s brilliant as a protest tactic. You’re not saying anything, you’re sitting very silently and modestly, and you can’t be kicked out for dressing inappropriately, because you’re all covered up. No frightful bare shoulders!” Handmaid protests were seen around the world, too: in Ireland, in Croatia, in London. According to Amazon sales, The Handmaid’s Tale was the most-read novel in the US in 2017. “For a society that claims to value individual freedom,” Atwood says, “I would say to them, evidently you don’t think this individual freedom extends to women”.

Is Atwood overwhelmed by her transformation into a figure somewhere between a prophet and a literary rock star? She laughs. “I think that this kind of thing could be quite ruinous for a 35-year-old,” she says, “because where do you go from there? In my case, we kind of know the answer!” 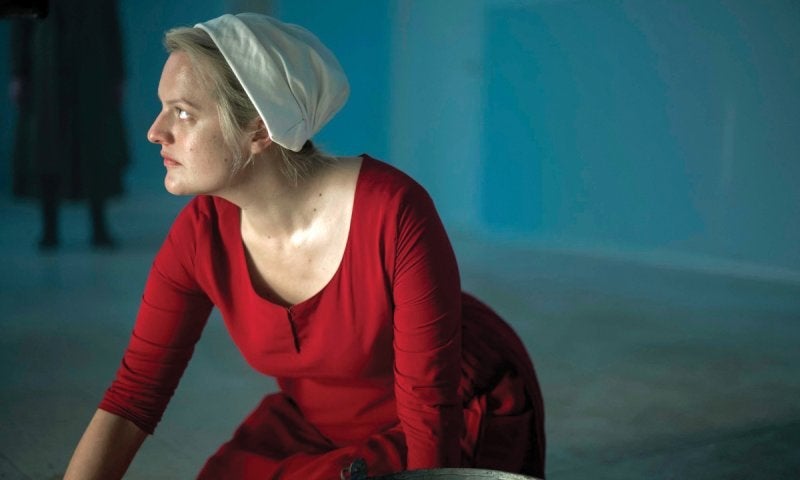 Elisabeth Moss as June in The Handmaid’s Tale​

The new novel is not, strictly speaking, a sequel to the original. Offred, the otherwise unnamed narrator of The Handmaid’s Tale, is violently abducted from her former life when the Republic of Gilead is founded: the power comes from her singular voice, the way in which she is able to contrast her present circumstances with her increasingly hazy memories of her former life of freedom and independence. We learn at the novel’s end that Gilead eventually fell, but the reader has no idea how. It was a question Atwood decided to investigate. “How did these kinds of regimes disappear? I was interested in exploring that, and also what it would be like for the second generation, because second generations in revolutionary regimes are quite different from first generations.” To the second generation, life within the regime is normal: “They’re not engaged in the violent part of the affair. A form of order has been restored.”

The book has three narrators: “One grows up within Gilead; one grows up across the border, in the place where you escape to when things go pear-shaped in the United States: Canada!” Another sly grin. “Therefore we see Gilead from within, from without – and from a founder.”

That founder is Aunt Lydia, a sinister enforcer in The Handmaid’s Tale, powerfully embodied by Ann Dowd in the TV series. She is the strongest voice in The Testaments: the reader comes to understand the choices she has made to reach her position. “The question always is with people in those kinds of positions in regimes: how do they get into it? How do they get into their positions of relative power, what do they use that power for and what is their justification to themselves about why they’re doing it?”

Atwood draws a parallel with Thomas Cromwell, Henry VIII’s wily minister who is the great protagonist of Hilary Mantel’s double Booker Prize-winning Tudor novels. The writing of The Testaments, Atwood says, was informed in part by her reading of historian Diarmaid MacCulloch’s recently published biography of Cromwell. (It’s worth remarking that the next major literary event in English-language publishing will be the final volume of Mantel’s trilogy, The Mirror and the Light, in the spring of 2020. Mantel is 67; Atwood 79.)

The Testaments has not been greeted with universal acclaim. Anne Enright in the Guardian described it as “Atwood at her best, in its mixture of generosity, insight and control. The prose is adroit, direct, beautifully turned.” Rebecca Abrams in the Financial Times, by contrast, found it “curiously dated” and offering “frustratingly little to extend our knowledge or deepen our understanding” of Gilead and the circumstances of the women who inhabit it.

This divided view is due perhaps in part to what I think of as the Star Wars dilemma. If a creator is brilliant enough to envision a world which its consumers can fully inhabit, those consumers may decide that the creator is finally superfluous to requirements. Star Wars came out when I was ten: I lived inside its universe for many years. When I see the new instalments I’m sure I know better than George Lucas what should be happening and how the characters should act; and so I am inevitably disappointed.

But when asked whether she was ever afraid of disappointing her audience, Atwood is characteristically brisk. “Who is ‘The Audience’?” she asks rhetorically, eyebrow raised. “The audience is comprised of a number of different individuals, last time I looked, and they will have different opinions. So, sure, there’s always a danger of… ‘letting down’ the audience, but it’s a danger we have faced before.”

That royal-sounding “we” is simply an acknowledgment that it is something every author comes up against; the more successful they are, the more likely it is to happen. Atwood, from the beginning, has ploughed her own furrow – she’s not about to stop now. As to whether she’ll return to Gilead, her reply is calmly neutral. “I never say never to anything, because I have said never and been wrong. It’s best not to tell anybody what you may or may not do, because if you do something else, there are just going to be endless questions about why you didn’t do what you said you were going to do. Politicians experience this all the time, but writers can avoid it by just keeping quiet!”

The Handmaid’s Tale and The Testaments can seem like dark tales for dark times. But Atwood argues that they are not. “Writing is always an act of hope,” she says, “because it assumes a reader. It assumes a reader in the future. The act of writing and the person reading it are separated by time and space.”

She was the first writer to contribute to the Scottish artist Katie Paterson’s Future Library – as Atwood describes it, “a writing project which lasts for 100 years. For every year of that 100 years, a forest will grow a little higher in Norway, and a different writer will submit a secret manuscript.” Only the author will know what’s in the manuscript when it’s handed over. “In the 100th year, the boxes will all be opened and enough trees will be cut to make the paper to print the future library of Norway.” By its very existence the project argues that “there will be people in 100 years, there will be a Norway… people will still be able to read, people will still be interested in reading. There is a great big bundle of hope right there.”

If what we need right now is a great big bundle of hope – and we do – I for one feel extremely reassured that Margaret Atwood is on hand to provide it.