In the years immediately following the end of the Second World War, a radical new style shifted the centre of the art world from Paris to New York. This transatlantic transposition was driven by immigrant artists. Abstract expressionism, which can claim to be the first truly American style, was largely the product of exiled Europeans: Willem de Kooning was a Dutchman who had crossed the Atlantic in 1926 as a stowaway; Mark Rothko was born Markus Rothkowitz, a Russian Jew from Latvia; Arshile Gorky was born Vostanik Adoian, an Armenian under the Ottoman empire; while Barnett Newman was the son of Polish Jewish immigrants.

It was a milieu then entirely familiar to another member of the group, Lee Krasner, the daughter of Ukrainian Jews who was born Lena Krassner (she also called herself Lenore for a while) in Brooklyn in 1908. Krasner had determined to be an artist while still in her early teens, and had a thorough training at a succession of women-only art institutions and, later, the school run by Hans Hofmann, a German modernist who had been friends with Matisse, Picasso, Braque and Robert and Sonia Delaunay in Paris. It was Hofmann who nudged Krasner, an accomplished artist of the human figure, towards abstraction. Her work was so good, he thought, that “you would not know it was done by a woman”. 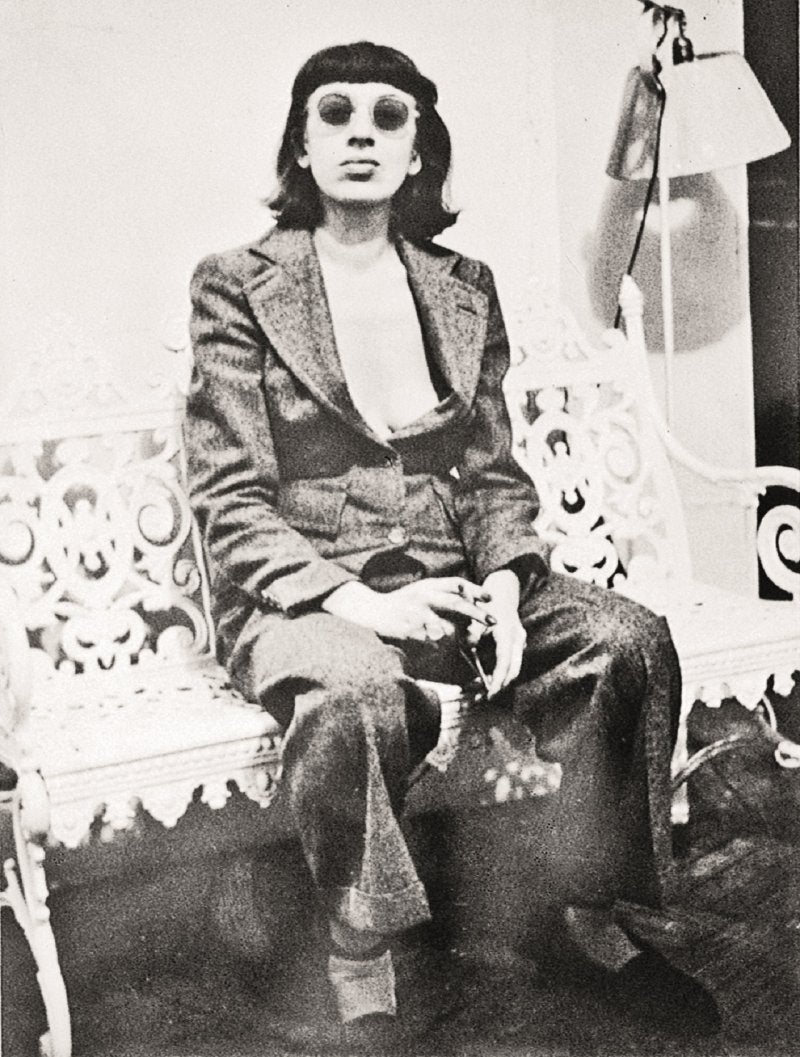 And that is the conundrum at the heart of her career. The abstract expressionists may have been an inclusive group – Helen Frankenthaler, Elaine de Kooning and Joan Mitchell were other significant female figures, while Peggy Guggenheim was both an AbEx champion and patron – but the critics and galleries preferred the men. As Krasner put it: “I was considered a ‘dame’ even if I was a painter too.” It is the aim of the Barbican’s retrospective, the first proper show of her work in Europe since 1965, to prove that she was a painter first and a dame second.

The greatest obstacle to this is, of course, that Krasner was also Mrs Jackson Pollock. The couple met in 1941 when, having been paired in an exhibition, she tracked him down to his studio. “When I saw his paintings, I almost died,” she said. “They bowled me over. Then I met him, and that was it.” That was it for her reputation, too. Despite the fact that she influenced his work (as well as being influenced by his), she couldn’t hope to compete with either his alcohol-fuelled charisma or the shocking physical drama of his drip paintings.

While he became the critics’ darling (the hugely influential theorist Clement Greenberg said simply: “Jackson was the greatest painter this country has produced”), she became his supporter and helpmeet, content enough, it seems, to live and work in his shadow. In 1972, another male critic, BH Friedman, came up with the term “action widow” to describe the female partners of the leading AbEx painters (one branch of abstract expressionism was also known as “action painting”) because of their perceived dependence on the men. Krasner was one of the women he had in mind. While such slights stung, there was little she could do about it, later acknowledging that: “I couldn’t run out and do a one-woman job on the sexist aspects of the art world, continue my painting and stay in the role I was in as Mrs Pollock.”

The Barbican’s response to the Pollock paradox is to ignore it altogether. So determined is the exhibition to present Krasner as a fully independent artist that he barely warrants a mention, and as a result he becomes the elephant in the room. Krasner would have been better served by showing how important her art was to him, how her contacts boosted his career, and examining at least something of their artistic interdependence and respect (they would visit each other’s studio only by appointment and her influence was noted by, among others, the painter Fritz Bultman, who described Pollock as Krasner’s “creation, her Frankenstein”). Indeed more could have been made of how his death in a drunken car crash in 1956 liberated her to paint her boldest works. 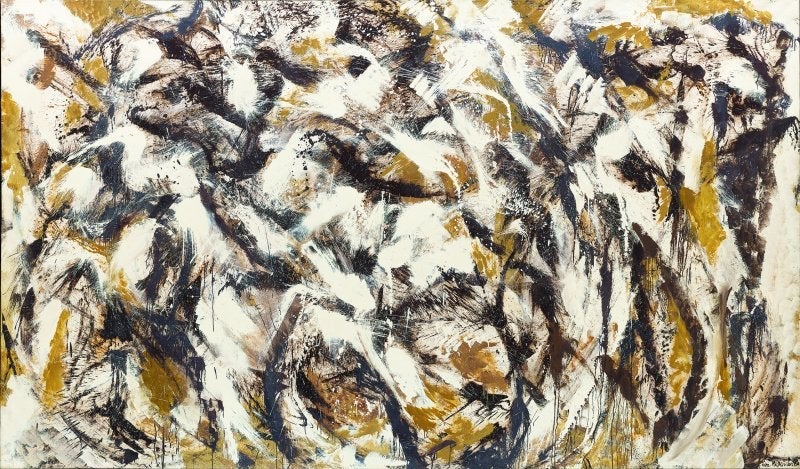 Krasner’s achievements are nevertheless impressive. She was one of the first American artists to move to abstraction and also worked for Franklin Roosevelt’s Public Works of Art Project throughout the 1930s. In 1942 she was asked to head a design team to make 20 department-store window displays advertising war-training courses in everything from trigonometry to explosives. Her response was a graphic mixture of photography, collage and typography that owed much to the modernist experiments of Alexander Rodchenko and the constructivists of the early Soviet period (during the Cold War, the FBI, suspecting she was a spy, opened files on “Mrs Jackson Pollock” and “Lee Pollock”).

When she and Pollock married in 1945 they moved to a small house with a barn at Springs, Long Island, bought with a $2,000 down-payment borrowed from Peggy Guggenheim, Pollock’s sponsor. He took the barn as his studio and Krasner took one of the bedrooms. The confines of her workspace are partly responsible for the series of heavily worked “Little Images” she made there, full of runic motifs, tight patterns, typographical marks and overlaid paint. They are intense images that belie their size. As she put it: “You can have giant physical size with no statement on it… And vice versa, you can have a tiny painting which is monumental in scale.”

Perhaps her most distinctive work came when a critically well-received but commercially unsuccessful show in 1951 left her with a series of unsold paintings. She turned them into collages using her own (and some of Pollock’s) torn-up drawings and additions of newspaper scraps and paint. Rather than the representational collages of Cubism, they take Sonia Delaunay’s collages – which often ended up as fabric designs – as their starting point, but exponentially increase their complexity and, in approved AbEx style, cover every inch of the picture surface. They are, to all intents and purposes, AbEx mosaics.

It was Pollock’s death that proved a turning point. Although they had become estranged, not least because of his affair with Ruth Kligman (who survived the car crash that killed him), Krasner’s grief was profound. It was immediately reflected in a series of four pictures showing bodies in torment, one of which, Prophecy, had been started before his death. With their bulbous limbs, Germolene-pink flesh and skew-whiff eyes and mouths it is hard not to see them as manifestations of inner turmoil.

She also took over Pollock’s barn studio – “there was no point in letting it stand empty,” she said – and, tacking unstretched canvases to the wall, started to work on paintings that matched his in scale. Some of the pictures, “Night Journeys”, were made during a period of insomnia induced by Pollock’s death, as well as her mother’s, and a fight with Clement Greenberg when he withdrew the offer of a solo show. In these pictures she claimed she “was going down deep into something which wasn’t easy or pleasant” and she realised that by painting at night she “would have to knock colour out altogether, because I wouldn’t deal with colour except in daylight”. So the pictures forsake daylight colours for more crepuscular shades of turmeric and off-white, and are full of bold gestural sweeps and paint flicks. 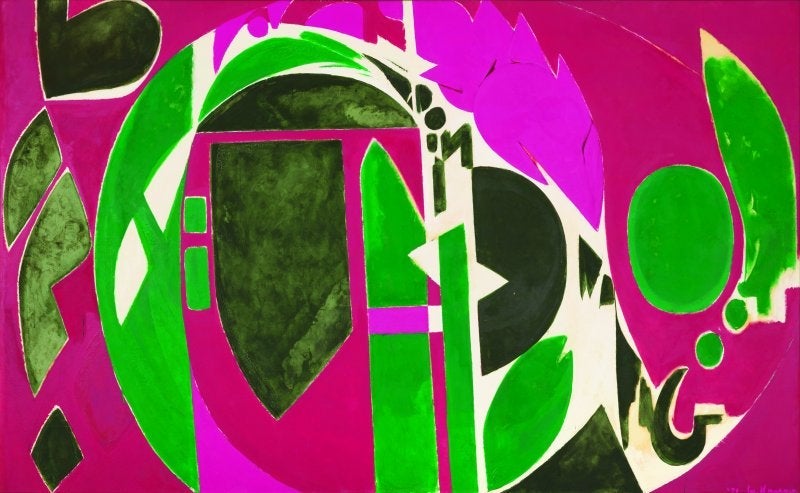 In the early 1960s she reintroduced colour – carmine and fuchsia pinks being favourites – but with similar broad whorls made with a dry brush. She often used just one or two shades and, ironically, found her most AbEx manner when the style itself had already been superseded. Later abstracts used harder-edged forms and then, again, collages made from her sliced drawings.

This stylistic impatience was intentional. “I change medium to restimulate myself,” she said. “It gets me working and that’s the important thing.” It didn’t help her reputation though. She refused to stick with a signature style because she felt that a single manner couldn’t encapsulate the range of her expressiveness and would be inauthentic. This made it harder for her supporters – and with the rise of feminist art criticism in the 1970s and 1980s there were many – to talk about what constituted a “Krasner”. She felt that the lack of critical pressure to reproduce herself endlessly was a blessing, though it isn’t clear that she ever found a style that she felt was instinctively hers.

The Barbican exhibition leaves Krasner enhanced though still not in the first rank of AbEx artists: her colours are a little too sharp, her influences – from Klee, Picasso, Mark Tobey, Pollock – a little too intrusive, her action paintings a little too late in the day.

Before she died in 1984, Krasner described herself to an interviewer: “I was a woman, Jewish, a widow, a damn good painter, thank you, and a little too independent.” It is a pretty fair summary – as the playwright Edward Albee said at her funeral, “Lee was not easy.” Her permanently pursed mouth was an indicator of her determination, both as a painter (even when they had no money, she insisted on using oil paints while Pollock used cheaper house paint) and to fight her corner (seeing off Guggenheim, for example, in a long legal case over Pollock’s legacy).

She had little truck with self-doubt, especially with the act of painting; no wishy-washy soul-searching for her. “You take a deep breath, hope for the best and get into it,” Krasner said. Putting paint on canvas was at heart a compulsion that required action rather than reflection: “I have to stay with it. That’s that.”