“Do you want to hear what I said again?” the owl asked, and my overly enthusiastic, trigger-happy finger – eager to get back to cutting the grass in the Kingdom of Hyrule – replied “Yes” before I realised what was being asked. Wait, I thought, I meant no! I didn’t want to hear it the first time!

Anyone who’s played The Legend of Zelda: Ocarina of Time (1998) will be familiar with this encounter. The game, prior to this moment, had shown a vast open field begging for exploration, and yet now a big owl with a penchant for spewing out chunks of exposition was making me slow down to read box after box of text. Attempting to quickly skip through it by mashing buttons, as I did, often only means that you have to listen to him all over again. 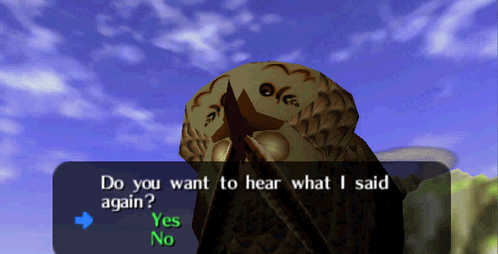 The Legend of Zelda: Ocarina of Time

It’s easy to see how text boxes in video games get a bad reputation. And yet despite this encounter, I can’t help but miss the days when text boxes dominated video games; when voice acting was not the norm.

It was the release of Final Fantasy IX in the year 2000, a game I played before Ocarina of Time, that made me care for the stories that could be contained within these simple darn rectangles. I wanted to read them; I enjoyed reading them. Before this, I had struggled with the focus required to keep my head in good book – video games even helped me improve my own writing (and should probably be credited with earning me the honour of “Best Jabberwocky-inspired Story” in Year Six).

In games, the characters, themes, and story were all made accessible for me at my own pace. Information could be repeated or entirely skipped. I was the director of the narrative.

Late into Final Fantasy IX, one scene cemented how engaging text in games can be. During one of the many moments in which Vivi, a playable prototype mage (wizard) character, ponders the meaning of his own mortality, he says: “I don’t think I really understand what it means to live and die.” Wow, ten-year-old me thought, do I? Whether he is thinking this line or actually saying it aloud is somewhat down to players’ interpretation. It’s a quiet and personal moment for Vivi, the weight of the line conveyed far better when you read and muse alongside him. But when Kingdom Hearts II (a game that incorporated some of the characters from the Final Fantasy series) was released in 2005, an actor’s voice was given to Vivi. Entirely different to the voice I’d heard in my head for years, the line’s delivery in this Vivi voice felt jarring.

When told entirely via text, the game gave me ownership of the voice that came from the character; something that was entirely personal to me. The game’s examination on themes like the aforementioned mortality would probably not have stuck with me for all these years if I had first heard those lines spoken in a hammy actor’s voice – the way they were in the 2005 remake. 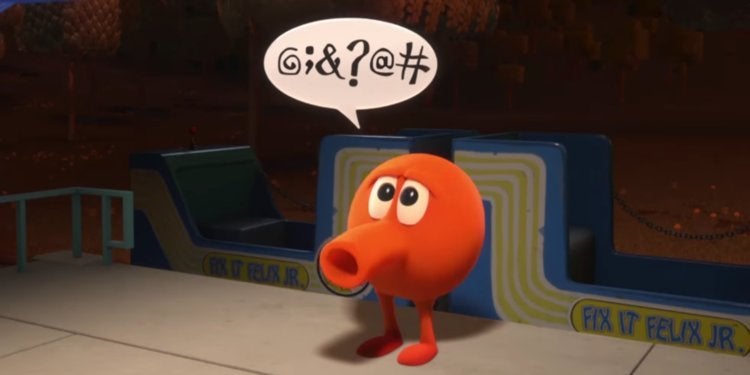 Would swearing characters lose their charm?

Interesting questions emerge when exploring these old video games’ text boxes. For example, if they ever get around to remaking Final Fantasy VII, a game often derided for its poor translation job, will it be well received by fans? Many of the characters were known for their swearing, which was censored with various symbols and special characters. The harmless, feigned profanity is part of what made them so charming. But it’s safe to assume that they would become far less appealing if we were to hear whatever words are being shielded by that garbled string of text.

And, swearing aside, when games increasingly started opted for voice actors, some performances left a lot to be desired. With many such video games coming from studios in Japan, questions around voice acting arose. How does a native Japanese-speaking director direct English-speaking actors? Which language do they synchronise the lip sync for? When Regina – a secret ops agent from Dino Crisis (1999) – arrives to the scene of a mutilated corpse and glibly says, “That’s disgusting”, does it make her gaming’s best portrayal of a female sociopath, or should they have done another line read? When you dig deeper into the writing behind games, more issues begin to wildly appear, with the unwelcome frequency of a Zubat.

For example the Japanese dialect has plenty of non-word sounds – think grunts and growls – that cause issues when translated for cutscenes, which are used to break up the gameplay. An English-speaking character is going to require more airtime/frames to say “what?” than would have been necessary for the Japanese version’s original grunt, meaning dialogue is rushed out of the actor’s mouth and as such comes with a stilted delivery. Text boxes previously provided more room for dialogue than a few seconds of a cutscene could allow, so the translation team had more freedom to be creative. This is something the Yakuza series gets right: rather than try to get English-speaking actors to haphazardly fill spaces made for Japanese, the creators simply kept the original Japanese voice cast and subtitled the game in English.

Another issue is that voice actors in games have started becoming too recognisable; you will often see the same names appearing across various cast lists. Troy Baker is one who appears in a long list of them, and in every new game you can’t help but notice him. While this works well for some of Baker’s games (see: Persona 4 and Last Of Us), many others struggle to overcome his recognisable voice in the gaming world (see: Silent Hill 2), with the Baker-voiced characters failing to sound like “just a normal guy”. Instead they sound like Troy Baker, with all the bells and whistles of a heavily coached performance.

While Silent Hill 2 may not benefit from its casting of Baker as main character James Sunderland, it does show how powerful text can be in otherwise understated moments. In the game – a psychological horror – Sunderland, makes a bad decision that sends him into the eponymous, fog-filled town of Silent Hill, where he receives a letter from his recently deceased wife Mary. “That’s definitely Mary’s name in her own handwriting,” the oral description of the letter says.

Yet as the game progresses and reality unravels for James, the player can check their inventory for clues. If you look at the letter near the end of the game, your inventory will tell you, in simple white text, that “There’s nothing written on the stationery.” The town of Silent Hill had tricked Sunderland and the letter wasn’t real, it was a manifestation created to make him acknowledge his guilt. Not all players will experience this moment; a player must actively look at the letter again for this reveal to occur. And with this clever use of menus and text boxes, we see that games can create an atmosphere that is entirely unique for its medium – although I can’t help but feel a remake would (detrimentally for the game) try and make these little moments into far more cinematic ones.

The letter in Silent Hill 2

On the plus side, video game performances are much better nowadays, and their characters way more expressive. Plus, the end of text means we’ve finally killed the overuse of the ellipsis… Hooray… New tech has started to allow us to tell far more cinematic stories with performances that are award-worthy endeavours. But although games have come on a long way from the days of Tim Curry’s 1994 Gabriel Knight, played with a heavily exaggerated and inconsistent New Orleans accent, I can’t help but feel games are often too keen on rewriting their history rather than embracing their pasts.

But, as much as I miss them, if they ever do decide to bring back the text boxes, I just hope that when asked “Do you want to hear what I said again?”, they place the “No” option above the “Yes”.