For the last three years, we have been globally plagued by a single home décor trend: the ostentatious pineapple. Everywhere you looked, from high-end luxury stores to tween bedside tables, to John Lewis candles holders, to your auntie’s tea towels, seemingly every bit of homeware tat was callously marked by the spiky silhouette.

Since the start of 2013, shopping searches for pineapples have steadily risen, spiking every summer then subsiding, but nonetheless growing evermore popular with every passing year. And although most fashion trends tend to come and go over the course of a season or two, the pineapple’s ubiquity has reigned king for the better part of the last decade.

I’ve been to a dozen homeware shops today and I don’t understand why every single one has tried to make me want to buy a golden pineapple. pic.twitter.com/NJzfUoJ87U However, the time has finally come for the pineapple’s dominance to end – at the hands of a fellow yellow tropical fruit. The humble banana, waiting in the wings for years, is at last ready to assert its authority as the New Year’s fruit fashion trend.

The banana’s takeover has been slow and steady. A long-time icon in pop culture – in part thanks to the Velvet Underground’s iconic, Andy Warhol-drawn album cover; in part thanks to the Arrested Development Banana Stand – it’s been an underrated constant in our design lives for the last fifty years. But now, with fruit themed jewellery, prints, art, and décor on the rise, the humble banana has finally decided to take centre stage. 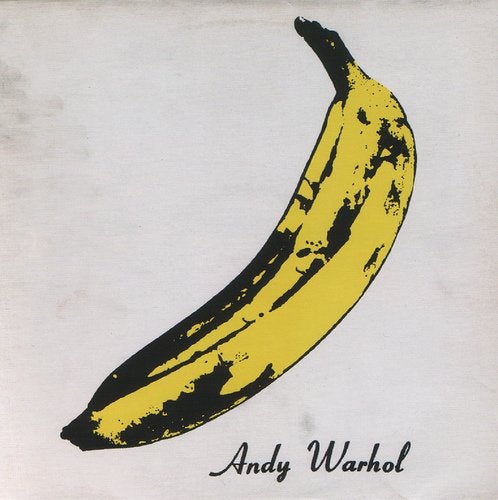 This new trend is, perhaps, unsurprising, with the fall of millennial pink in place of Gen-Z yellow at the end of 2017. The pineapple, despite its obvious brown-yellow body and green topped exterior, was often portrayed at its trendiest in its pink form – with people even genetically modifying the insides of their yellow pineapples to turn them that Pepto-Bismol pink. Was the pineapple, forced into millennial pink flesh, inevitably going to fall to a fruit better suited to the new hot, trendy colour? (The banana, of course, would reply with a resounding yes.)

The banana trend started slowly at the beginning of this year. It was treated not first at the centrepiece of design, but as a quirky feature of home décor. Places like Oliver Bonas, Dear Sam, and Primark all began to feature banana art in their homeware sections, initially as a dash of flare or side piece to other statement art: the banana appeared as funky poster placed amongst more standard, less intimidating designs, or as a subtle detail or pattern on a product inconsequential to the brand, like a napkin. 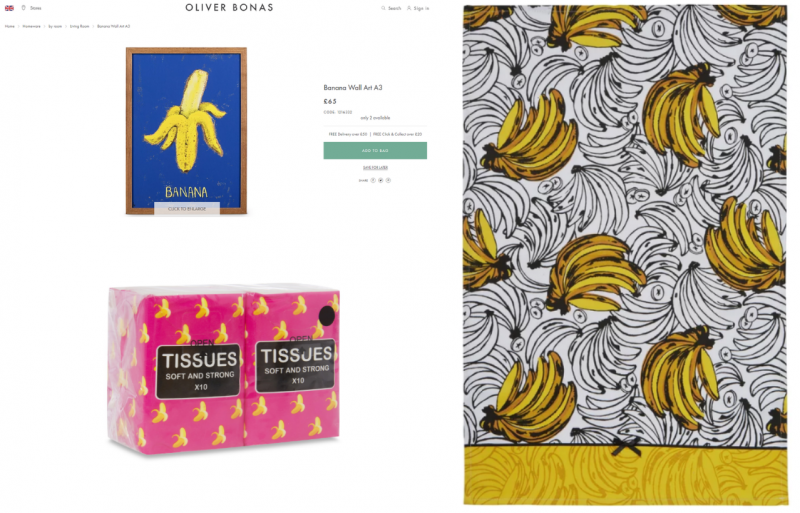 Via Oliver Bonas, Primark, and Wayfair

But then the banana began to compete with the pineapple for real estatein the fashion world. Fruit designs were aggressively present in Spring/Summer 2018 women’s clothing lines; featuring everywhere from designer brands like Dolce & Gabanna, and fast fashion outlets, like The Iconic, with the two tropical fruits sharing runways as well as sharing space on the exact same items of clothing. 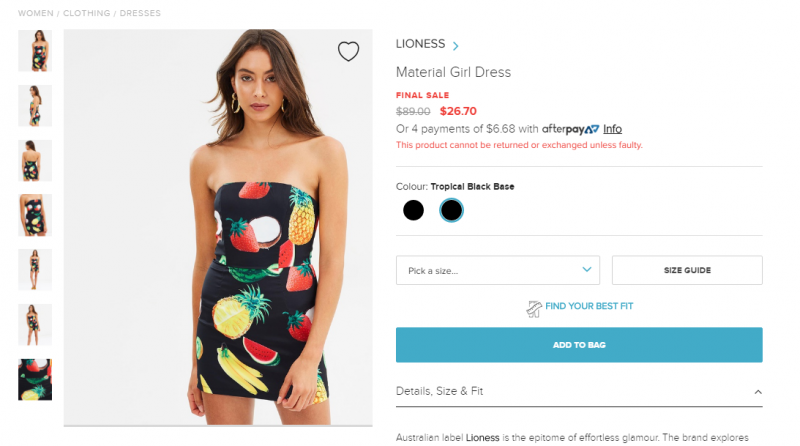 And as this year has gone on, the banana has fully taken its place as the West’s leading design fruit: New season Prada features bananas on shoes, skirts, dresses, and handbags. A search for “banana décor” on craft-makers website, Etsy, now yields over 6,000 results. The 143-year-old luxury department store Liberty has featured bananas across ornaments, lamps, and homewares ahead of its Christmas season. And Pantone, which decides the grand annual “Color of the Year”, has forecasted bright banana yellows in both its London and New York Fashion Week forecasts for Spring/Summer 2019. For those watching closely, the banana is now, as the proverb goes, top.

Would you ever break your own biggest style rule? That’s exactly what Man Repeller asked four community members to do in a recent photo shoot. See what happened via link in bio…

While we may not yet be seeing the very, very bitter end of the pineapple’s tyranny, a new dawn has broken in the plant trend world. The banana will soon handily relegate the pineapple to design history, making us sick of its ubiquity in a matter of months.