In the autumn of 1959 Patrick Heron was walking through the steep and narrow lanes of St Ives in Cornwall when he came across a most unexpected new arrival, the distinctly metropolitan and determinedly louche Francis Bacon. St Ives at that time was the epicentre of British abstract art and Bacon loathed abstraction which was, for him, little more than “decoration”, merely “an illustration or accident about nothing”. Nor was he a fan of landscape: when someone suggested he go to Switzerland to live he responded pithily: “All those fucking views!” Not unnaturally, Heron, committed head of the decoration tendency, asked Bacon why he was there and was met with an airy lie: “I had no idea that you were all here, dear!”

Bacon never stated the reason for his four-month sojourn in Cornwall but his personal life, not for the first time, was a mess; he was unsure as to the direction of his own art; and just maybe, Bacon thought, abstraction, a style in the ascendant, had something to teach him after all.

Although he privately and sarcastically referred to Heron as “the Prince of Painters” he nevertheless accepted an invitation to Christmas dinner at his house, Eagles Nest, in Zennor, near St Ives. The meal culminated with Heron doing an impersonation of Bacon lighting the Christmas pudding, using most of a bottle of brandy and announcing tipsily, “I’m very good at starting fires!” Indeed he was, although the only one he managed in St Ives was when he got into a fight in a pub and was pretty much run out of town. The brief coming together of Britain’s chief abstract artist and its chief figurative one faded from memory.

The difference between the two men extended beyond simple matters of style (though during Bacon’s stay echoes of Heron’s broad swathes of colour began to appear in his backgrounds) to explaining what they were up to. Bacon was a fine talker but a poor explicator: he frequently discussed his urge to make paintings that would assault the viewer viscerally, but he almost never gave any help as to what his pictures were actually about. Heron, on the other hand, was for decades a writer on art, for the New Statesman and for Arts Digest, New York (later renamed Arts (NY)).

In his writings he expounded his belief that colour and space should be the primary concerns of the artist and that early 20th-century Paris and Cézanne, Matisse, Bonnard and Braque were the time and the painters that mattered. It was Matisse’s The Red Studio, 1911, a bravura display of colour, skewed dimensionality and sublimated reality that became his talisman and the focus of innumerable visits to the Redfern Gallery in London, where it hung from 1943 to 1948. 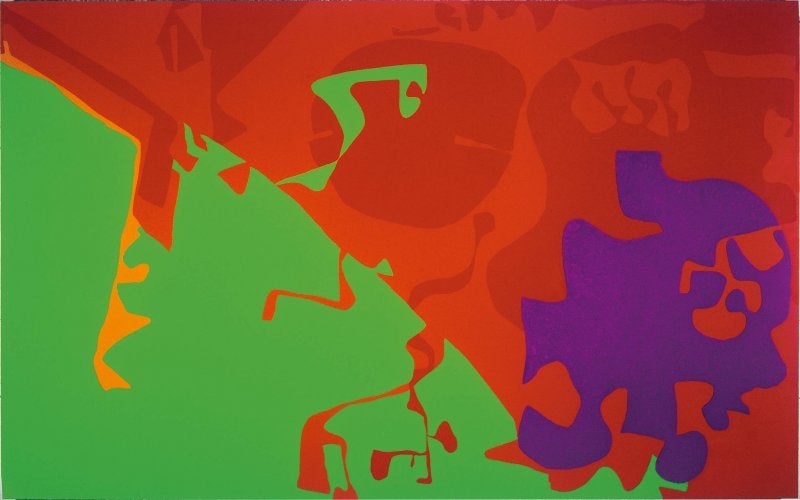 Heron the critic was also one of the figures responsible for introducing the American abstract expressionists to a British audience. Although he was later to accuse Pollock, De Kooning et al (but not Rothko) of cultural imperialism and not being painterly enough, the scale of their pictures, their rhythm, saturated palette and insistence that each part of the canvas was as important as every other, had a profound effect on him. Heron believed that, “Painting is thinking with one’s hand; or with one’s arm; in fact with one’s whole body,” and the epic AbEx works represented his aphorism in action.

Heron himself had not started as an abstract painter but he shared what Gillian Ayres defined as the postwar generation’s obsession with “what can be done with painting”. For Heron and others such as Victor Pasmore, William Turnbull and Robyn Denny, this meant renouncing the explicitly figurative (Pasmore was initially uncommitted: “you can do about a dozen of those brushstroke pictures, and that’s about it”). Until the mid-1950s he painted stylised and distinctive realistic pictures, including a celebrated portrait of his hero TS Eliot, now in the National Portrait Gallery.

Abstraction was in some ways a natural progression. His father Tom moved the family from Leeds, where Patrick was born in 1920, to St Ives when he became the manager of the Cryséde fabric company that specialised in artist-designed silks. In 1929 they moved again, to Welwyn Garden City, where Tom ran Cresta Silks, whose artists numbered Paul Nash, Edward McKnight Kauffer and Cedric Morris. As a 14-year-old Patrick also started to contribute scarf designs, and continued to do so until 1951. The colour-rich paintings of the 1960s and 1970s could double perfectly as fabric designs.

After school Heron studied part time at the Slade and then, with the coming of war, registered as a conscientious objector. He was initially set to digging trenches in the Cambridgeshire fens and then sent down to St Ives to act as an assistant to the potter Bernard Leach, who happened to be an old family friend.

From 1945 he was back in London making a small name for himself as a painter of fauvist landscapes and Bloomsbury Group interiors. When he returned to Cornwall permanently in 1955, buying Eagles Nest, where he lived until his death in 1999, he still found time to attend the first meeting of the newly convened Campaign for Nuclear Disarmament (in the company of Herbert Read) and buy 165 acres of moorland to stop the Admiralty from using it as a troop landing exercise area.

Although Heron became the figurehead of the newest generation of St Ives artists which included, among others, Peter Lanyon, Roger Hilton, Victor Pasmore and Terry Frost – taking over Ben Nicholson’s old studio for good measure – the town and its dramatic landscape of sea and cliffs were not the focus of his art. The subject was painting itself: “All my painting,” he said, “was totally unrelated to any painting ever made in Cornwall. It was largely based on the French masters I so admired.” Heron was, to all intents and purposes, an international artist self-exiled in the furthest tip of the country.

It is 20 years since the last major Heron retrospective, and now Tate St Ives is celebrating the first full summer of its newly extended building by honouring its favourite son with an exhibition of 45 paintings spanning more than 50 years, 1943-1996. It is, depending how you approach it, either a joyous and rewarding show or a deeply, deeply frustrating one. The frustration is entirely the fault of the curators, who have ingested to a fault the spirit of Heron’s occasional intellectual knottiness. Rather than present a chronological display to show the painter’s progression and trust the viewer to join the dots of the narrative they have gone for thematic groupings. There’s a case to be made for that too, but not these groupings. It is hard to imagine a more unfriendly and gnomic set of categories than their “Edges”, “Explicit Scale”, “Unity of the Work” and the peerless “Asymmetry and Recomplication”. As is increasingly the case, someone should curate the curators. 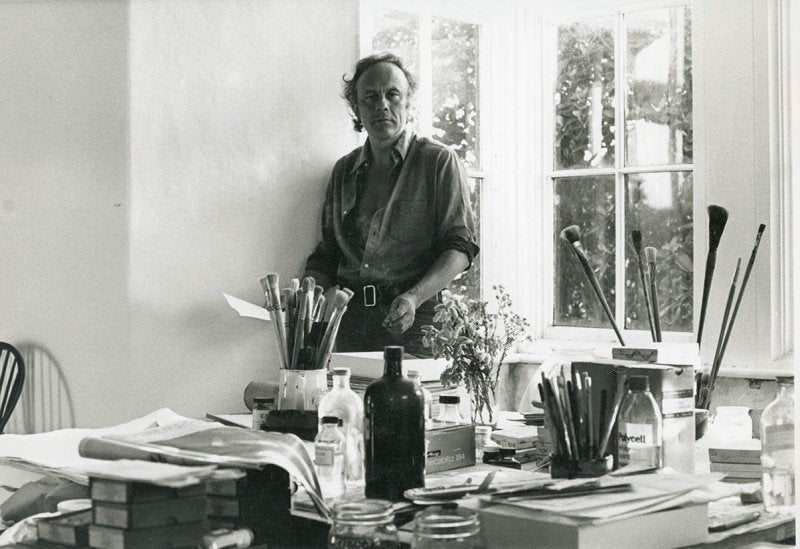 Patrick Heron in his studio, circa 1968

The majority of the paintings themselves are both joyous and beautiful, great sheets of throbbing colour interspersed with squares, circles and ragged patches of different hues that advance and recede as you look at them. The prosaic titles, Square Green with Orange, Violet and Lemon: 1969, for example, simply illustrate Heron’s belief that “The picture is not the vehicle of meaning: the picture is the meaning.” This is why he needed abstraction; a recognisable view, person or room automatically becomes what the painting is about.

The pleasures of his surfaces are even more evident close up: the delicate impasto he created by using Japanese watercolour brushes on vast canvases, the sense of forms and voids being formed where one colour stops and another starts, the “wobbly hard-edge” – like torn paper – that gives interest to the most crisply defined patches of colour, the patterns on the paint like eddies in water. Heron’s work can look flat in reproduction, mere poster art; in the flesh though it comes alive.

Heron may have been at pains to do away with “the intrusion of specific images of real objects” but the sense of real objects is nevertheless powerfully transmitted. The “physical realities of painting” were, he claimed, “that contrapuntal play of form upon form, colour upon colour, flatness upon flatness, depth of space upon depth of space” but he acknowledged that his soft horizontal stripe paintings such as Lux Eterna: May-June 1958 contain the memory of the strata of waves and sky and that patch pictures such as Azalea Garden: May 1956 refer explicitly to the play of broken light on his flower beds at Eagles Nest. His paintings contain the residue of natural forms – especially in his late and not always successful white-ground garden paintings – freed from their recognisable shapes.

The curators contend that Heron was always consistent and that even as a figurative artist he sought to transmit the abstract patterns that underlay real appearances. Visitors though would do better to follow the example of Heron himself when he grew tired of theorising and let instinct take over, because “deliberation is fruitless”.

Topics in this article : Cornwall

This article appears in the 30 May 2018 issue of the New Statesman, God isn’t dead