Justin Bieber is having a moment. Last week, he made US chart history when he smashed a record previously held by the Beatles for the most singles in the charts in a single week (the Beatles had 14 in 1964, Bieber had 17). This week, he looks set to beat himself to number one in the UK chart with “Love Yourself”. He’s been a teen sensation for years, but so far never received this level of international popularity: now, Bieber is all grown up. At least, that’s what his label would like us to think.

Bieber’s songwriters, stylists and management have worked hard to cultivate an image of new-found maturity to coincide with the release of his latest album Purpose, mostly aiming to achieve this through a heady mix of shirtless photoshoots and apologetic soundbites. (See his Men’s Health cover earlier this year, for the “Reinvention Issue”: “It’s time for me to grow up.”) 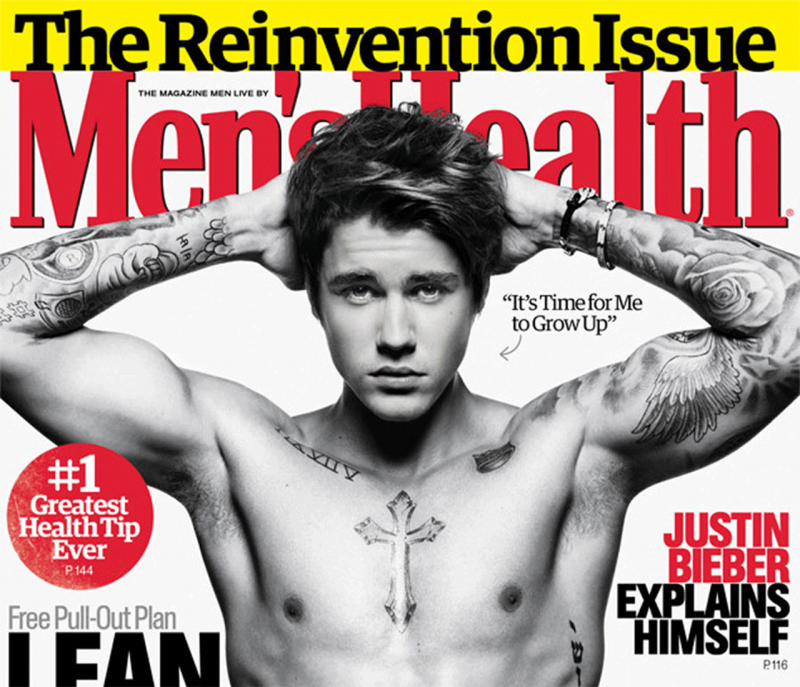 His transition away from teen pop towards tropical house and R&B has also seen him gain some hipster credibility: a combination of both these factors led Vice’s music site Noisey to conclude: “Justin Bieber’s rise through international hate and personal struggle has been majestic.”

Bieber’s new album is musically irresistible, and certainly his best (I say that as a staunch fan of “Boyfriend” and “Mistletoe”). But lyrically, Purpose often sounds like the rantings of a young boy proudly revealing the hypocrisy and unfairness he sees in the world’s impression of him: lest we forget, the name Justin comes from the Latin for “just”.

The opener “Mark My Words” reads more like a series of vague threats than a love song: “Mark my words / I’ll give you all I got / In every way / I will”. It sets the tone for the petulant “I’ll Show You’, which tonally veers suddenly between aggression and self-pity:

Here, Bieber has expertly tapped into the defensive psyche of every man who ever responded to your slight criticisms with, “Hey, I’m under a lot of stress right now and nobody’s perfect, not even you!!” It’s not clear who “they” are (the media? The public? His fans?), but the song seems to be a general middle finger to everyone who has ever criticised him. He’s human, not a steel man made of steel, okay?!

The third song on the album is chart-topping lead single “What Do You Mean?”: a certified banger, it sees Bieber explore the perspective of some guy who’s fed up with an “indecisive” and incomprehensible woman in his life. “You’re so confusing,” he whines in the background. “Be more straightforward.” There are also a few suggestions that the narrator’s main frustration with this girl is that he finds her superior: “You want to make a point, but you keep preaching.” Bloody holier-than-thou, irrational, emotional women, eh?

Next comes another UK and US number one, “Sorry”, which, again, is just a ridiculously good pop song. While intentionally marketed as Bieber’s apology for past mistakes, the song could more accurately be named “Sorry, Not Sorry”. Has a non-apology ever opened with a line as masterful as, “You gotta go and get angry at all of my honesty”? Sorry for being HONEST. I’m sorry you CAN’T HANDLE THE TRUTH. This sincere apology continues with the couplet:

If you were worried that it feels like our speaker is merely consenting to read from a script in order to pacify his listener, he confirms your suspicions with the tempting offer: “Can’t we both say the words and forget this?”

But, dear listener, peak pettiness has not yet been reached. Bieber’s fourth single from the album, and soon-to-be its third number one, is “Love Yourself”: the word “love” here stands in for a different four-letter word altogether. A song with a whimsical, laid-back tone, it contains some of the most devastatingly horrible lyrics to ever top the charts. The narrator opens his four-minute long assault on his ex’s self-esteem by feigning disinterest in her:

You think you broke my heart, oh girl for goodness sake
You think I’m crying on my own, well I ain’t

“I’m actually laughing. No, this whole thing is actually funny to me. You think I’m sad but I’m laughing, and all my friends are laughing too. Hahaha.”

He continues by aggressively shaming her for being confident in her own appearance (“Cause if you like the way you look that much / baby you should go and love yourself”) and adding that his not-at-all biased friends and family totally agree that she is a dirt person:

My mama don’t like you, and she likes everyone.

“My mum agrees with me on this whole thing, so.”

He briefly goes into the familiar self-pitying mode to say that he made himself vulnerable to her, and that he was caught up in his job (remember the pressure he’s under?!) before switching back to shaming. Then there are some smooth, calming trumpet noises.

These five tracks together work as a realistic sketch of an entitled, bratty manchild. But as we all know, pop stars are all about the “journey”, and there could feasibly be an argument that Purpose chronologically details Bieber’s transition from a sulky, petulant boy to the spiritual young man, head bowed in humility, that appears on the album artwork. A Portrait of the Artist as a Douchebag, if you will.

Taken as a whole, the album is structured as follows. We open with five songs that are basically like, Nobody UNDERSTANDS me, and I never said I was PERFECT, okay?? Sorry for being ALIVE! They’re followed by two Hey let’s have sex but don’t call me after songs (“Company”, “No Pressure”). Out of the last six tracks, three are pseudo-religious spiritual awakenings: “Life is Worth Living”, “Children” and “Purpose” that suggest that, as he as has said in interviews, Bieber has found comfort from reconnecting with his faith.

Nestled between these tracks, the summer collab with Skrillex and Diplo, “Where Are Ü Now”, manages to simultaneously feel like the expression of abandonment issues and a tortured devotional lyric, as Bieber struggles with doubt.

As traditional piano ballad “Life is Worth Living” explains, “God sent an angel to help us out, yeah / He gave us direction, showed us how to make it last / For that long journey ahead.”

“Purpose” adds, “You’re not hard to reach / And you bless me with the best gift /That I’ve ever known / You give me purpose.”

But behind Bieber’s new-found resolution are hints of the man who came before. While he thanks God for saving him from a destructive path, on “Life is Worth Living” he continues to insist that “the meaning of forgiveness” is that “people make mistakes”. It takes quite the lyricist to infuse so much defensiveness and resentment into straightforward musings on redemption:

What I’d give for my reflection
Is a different perception
From what the world may see
They try to crucify me
I ain’t perfect, won’t deny
My reputation’s on the line
So I’m working on a better me

The fault still primarily lies with the outside world’s “perception”, and Bieber’s only real flaw is that he is imperfect. He’s made of flesh, and like Jesus Christ himself, risks crucifixion for it. Justin, Jesus: I guess the only difference is that Bieber might have time to rescue his credibility before Pontius Pilate/Pitchfork makes their final decision. Godspeed, Biebs.