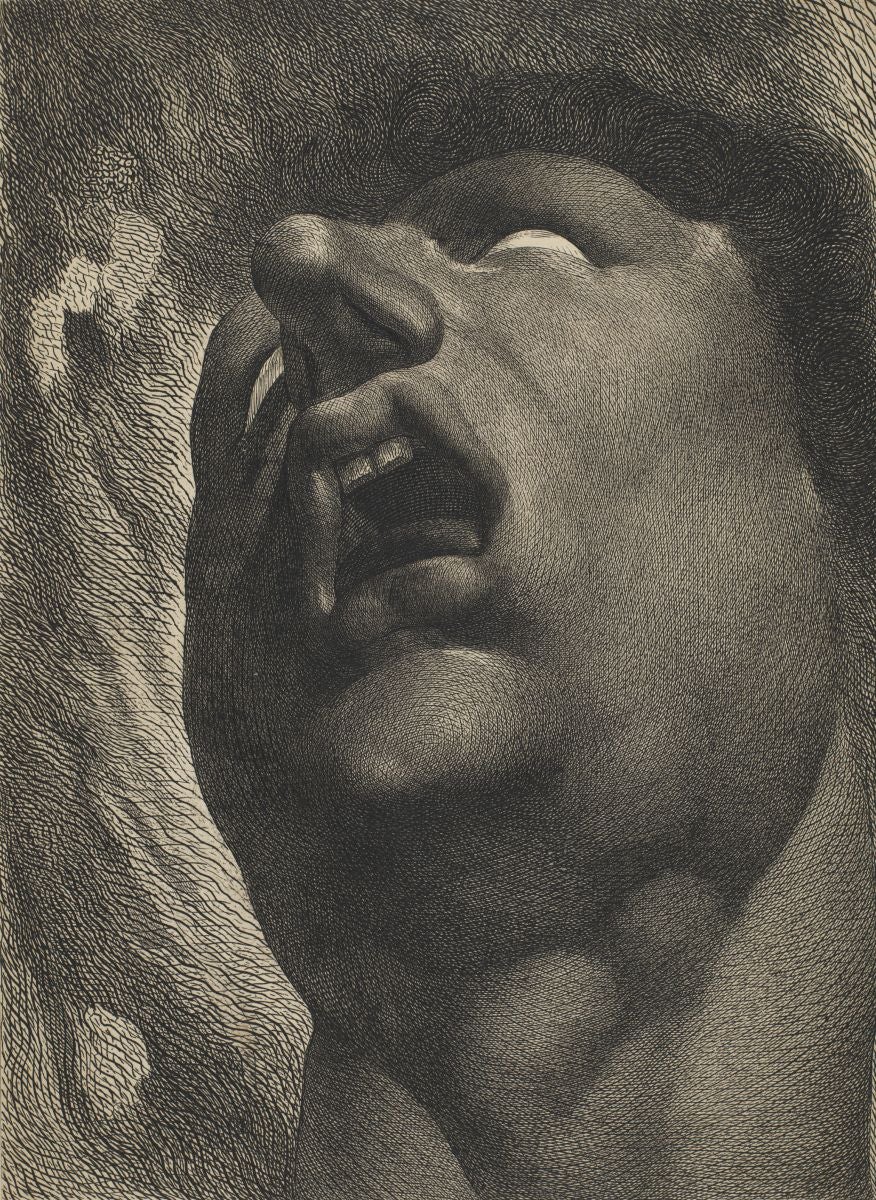 Walk by the memorial to William Blake in Bunhill Fields in London almost any day of the year, and you will find offerings placed before it, underneath the fig tree that overhangs the spot: usually there is a jar with flowers and almost always there are coppers set along the curve of the stone. These quotidian oblations are testimony to the peculiar power of the visionary artist.

“If Italy is enriched and made great by Raphael, if Michael Angelo is its supreme glory, if Art is the glory of a Nation, if Genius and Inspiration are the great Origin and Bond of Society, the distinction my Works have obtained from those who best understand such things, calls for my Exhibition as the greatest of Duties to my Country,” he wrote in 1809, in advance of the only exhibition of his works during his lifetime. On a broadside produced to advertise his “paintings in fresco”, as he called them (his method was actually closer to tempera painting; he “tempered” his pigments with a binding agent), Blake set out a quotation from Milton’s Paradise Lost: “Fit audience find, tho’ few”. He knew his worth; he knew, too, that others might not.

Bunhill (“bone hill”) Fields was the Dissenters’ burial ground; much less easily discovered there is any marker for Blake’s beloved younger brother Robert, who died in 1787 at the age of 24. It was Robert’s spirit that revealed to the artist, in a dream, “the mode of accomplishing the publication of his illustrated songs, without their being subject to the expense of letter-press”, as one of the earliest accounts of Blake’s life had it. As the guest curator Michael Phillips explains in his fine catalogue, Blake’s innovation in engraving “turned the conventional practice on its head”, so that instead of covering the plate’s surface with a ground and scratching the design into it, he treated the copper plate like a sheet of paper, using varnish like ink and writing his text directly on to the polished surface of the plate: the “infernal method”, as he wrote in The Marriage of Heaven and Hell. Blake’s technique was revolutionary; just how revelatory it was is demonstrated in the Ashmolean’s “William Blake: Apprentice and Master”, a concise and beautiful show that highlights his extraordinary technical skill.

The Ashmolean is on a roll when it comes to taking topics that might seem overexposed and considering them anew: the just-ended “Discovering Tutankhamun” cast fresh light on the pharaoh’s oft-told tale by highlighting Howard Carter’s remarkable drawings from the tomb’s excavation. And although it is true that the last big Blake show was nearly 15 years ago at the Tate, his work is reproduced so frequently that it’s easy to think there is no more to say or see.

The show is broken up into three sections, covering his childhood and apprenticeship, when he was engaged to James Basire, a London engraver, and sent out to study the city’s Gothic churches; his innovations in colour printing techniques in the last part of the 18th century; and finally his later career and that of the Ancients, as they called themselves: the young artists who became his disciples – Samuel Palmer, George Richmond and Edward Calvert. It would be perfectly possible to look at everything the museum has on offer in an hour, if one were so inclined; and yet the show would reward a great many repeat visits.

Reproduction diminishes Blake and contains him. But viewed “live”, the relief and white-line etching of The Approach of Doom (c.1788), created in answer to a work of Robert’s, are viscerally free, vividly present; it is astonishing to think it was made well over two centuries ago. How was it made? A re-creation of Blake’s Lambeth studio in the centre gallery gives the viewer a good idea. Although the site of the studio – No 13 Hercules Buildings, on Hercules Road, SE1 – was razed in 1918, recently discovered plans show the house’s dimensions, and Phillips (a skilled printmaker who has re-created Blake’s illuminated books) gives insight, in this simple room with its wooden press, into Blake’s daily environment.

It is striking to see three images of The House of Death/The Lazar House (c.1795) set side by side; never before have they been displayed together this way, and each is so very different. Paler colours or greener tones alter the whole feel of the scene; Blake finished each colour-printed monotype with chalk, watercolour, Indian ink – whatever suited his needs. His artistic adventurousness can also be seen in the work of those who came after him. George Richmond’s The Creation of Light (1826) is thoroughly Blakean in its vision, in the musculature of the soaring figure at its centre; but the gold and silver that accentuate the tempera seem to anticipate the dazzling work of Gustav Klimt.

Perhaps this is not surprising. Blake’s imagination was not bounded by time; in his Lambeth garden with his wife, Catherine, he was at one with all the world for ever. “In him you saw at once the Maker, the Inventor,” Samuel Palmer wrote of him; “one of the few in any age . . . He was energy itself . . . To walk with him in the country was to perceive the soul of beauty through the forms of matter . . . Those may laugh at this who never knew such an one as Blake; but of him it is the simple truth.”