Gazing up at Steve Austin, I could tell that this was a real man. A Six Million Dollar Man, in fact. I could tell by his square jaw, square hairdo, square everything. The poster was on the wall of my first bedroom, which means I must have been four, because Mum remarried when I was five. No More Shouting was the instant and lasting benefit. Dad was a real man, too, but not like Steve Austin. Steve Austin didn’t make everyone cry.

Neither did Han Solo, Buck Rogers, Dick Turpin or B A Baracus. What they did instead was beat people up, stab them or shoot them. My childhood was as heavily gendered as any you would find in a working-class household in Lincolnshire. As such, it was nothing less than an orgy of make-believe violence. I was never without a plastic gun or a plastic sword; if I was on my bike, that bike was Zorro’s horse: simply a means of transporting me between punch-ups. Or it was a motorcycle zooming me along to make some tough, wisecracking arrest with the California Highway Patrol in CHiPs. Yes, I made spaceships out of Lego but the point of spaceships was to blow up other spaceships. How I hated the boring bits of Monkey where our hero is admonished simply for battering the baddies to death with his metal pole. How I longed for the Doctor to lose patience with this annoying Silurian and just punch him hard in the mouth. And what the hell was Aslan waiting for?

My escape from the violent rows of the last years of my parents’ marriage was not into a world of science or religion or dreams of becoming a florist or ballet dancer. It was an escape into a safer, more containable world of violence. I don’t think I was unusual in that respect: I was a hopelessly conventional boy. The trouble was, in the real world, fulfilling those conventions was something at which I was hopeless. I gave lousy “boy”.

I was a weed. Legs like sticks, arms like reeds, ribs like the notes of a toy xylophone made of twigs. Every night, I’d sit in the living room of “the new house” (the bungalow) with a stepdad, a mum and two much older brothers all chain-smoking their way through Coronation Street and Minder. They smoked in the kitchen; they smoked in the car. I could basically breathe but not run, not fast and certainly not for long. Slow, skinny and an utter countryside coward: I lived in dread of nettles, spiders and the very sound of a wasp. As a victim, I was beneath the dignity of the bullies in my year but fair game to the ones in the year below. And when it came to picking teams for football, I was reliably the second-to-last choice, the last choice being a kid called Mark who had cerebral palsy. Nope, that wasn’t a joke.

This was primary school. At grammar school, things went sharply downhill. I became dimly aware that this macho-man aspiration was, quite possibly, not doing me any favours. Ultimately, I don’t think it does any boy any favours but maybe I was in particular need of a “rebrand” or “makeover” or some other term that we all seemed to manage without in 1985. The problem was ultimately the solution: this was a good school, where boys, just like girls, were allowed to be clever. I’d lived in fear of being called a “poof”. Now, thank God, there was something just as bad: they might call me a “divvy”. In the summer exams at the end of my first year, my average score put me 17th in a class of 24. I’d stuffed my head with pointless fantasies of physical invincibility and forgotten to be good at anything real. But it wasn’t all for nothing: I remembered that Zorro reads books when he takes his mask off. I liked Zorro but needed Don Diego.

Boys and girls in flight from gender expectations are apt to overdo it. So, yes, this is a well-known tale of “wimp has to get smart”. But also of “teenage zealot sets about everything he doesn’t like about himself with a machete”. I was taking delivery of a huge dose of testosterone at the exact moment that I decided all this testosterone-worship had been, well . . . childish.

The results were predictable. So, I’m 13, I speak with a Lincolnshire accent like my father. Fine. I can’t stand my father so the accent will have to go. It went. So, I’m a joke on the football pitch. Fine. This will now be my joke. I will make you boys laugh so much that, like me, you can barely run. This occasionally worked. So, real men don’t read poetry. Up yours. I’m applying to a very posh university to study English. Tough one, this, but they eventually let me in. And apparently real men don’t get off with other men: hello, boys! I would characterise this new approach to boys (which involved various approaches to boys) as a shot glass of gay desire in an ocean of rebellion. But also convenient, because most of the girls thought I was out of my mind.

They had a point. My mother died when I was 17 and I moved in with my dad to make a 12-month pig’s ear of retaking my A-levels. To summarise: bumpy. But the scary tyrant of my childhood turned out to be just this . . . bloke. A charming, exasperating bloke. And the original real man was a good cook and talked knowledgeably about birds and flowers. This was unhelpful; he was spoiling my new thought system. Real men are sexist, overbearing, unreflecting drunks who treat their wives badly and vote Conservative. Dad was capable of supplying evidence for every part of this grand theory. But puzzlingly, he could also be generous, sensible, bright and funny, and was obviously adored by more or less everyone in our village. In fact, he showed worrying signs of being just another complicated human being. This was outrageous. I decided to resent him for that, too.

He was in the habit of telling people what they were like and, with me, he often prefaced this with the phrase, “You’re like me . . .” So, “You’re like me, boy: moody,” or, “You’re like me, son: you like a pint,” or, “You’re like me, Rob: we’re no good at talking about our feelings.” He was always right. But anyway, I was in no mood to talk to him. This was the guy who, a year earlier, had turned up at the bungalow of tubes and chemicals. The oxygen tanks, the vials of morphine kept in a Tupperware box, the occasional hovering nurse, the friends coming round with some taut cheeriness and home-made lasagne. And then the extended family and the friends of friends who’d driven 80 miles to see Mum because they just wanted to say – wait for it – “hello”. Into this bungalow came my father, drunk, to explain to me that the situation was serious.

By the time I Blu-tacked a poster to the wall of my first-year room in Cambridge, Steve Austin had given way to Brett Anderson. The lead singer of Suede was notorious for the daft quote, “I’m a bisexual man who’s never had a homosexual experience.” I tended to show a bit more commitment than Brett in this regard. “Nobody is going to say this is a pose,” I announced to myself as I once again flounced into the college bar with my silver earring and long coat. I think “Come and call me a poof if you think you’re hard enough” was the slightly misfiring impulse. The soundtrack in my head would be playing “Animal Nitrate”. Five pints later, I would stumble out again to the theme from Bullseye.

“Good old boy,” Dad would chortle down the phone, “you like a pint, just like yer daddy.” Christ. My lager was better than his lager. And I would go home in the holidays with an air of studied tolerance and refuse to tell him much about what was going on and refuse to argue with him about politics. We’d eat our tea in front of Channel 4 News (how he enjoyed hating Jon Snow; “Who’s a pretty boy, then!?” he once yelled at the portable telly when Snow was giving some bishop a hard time) and he would give a running commentary on what was wrong with the country and who was to blame and I would sit there eating the meal he had cooked for me and nod and shrug and close it down. I allowed him to assume that I thought his opinions were beneath my important consideration.

Why did I treat him like this? Because I was furious with him for not being dead. My smart, kind, beautiful mum had just died and I was stuck with this pillock. But the real insult was that he was a man. Don’t “women and children” go first? Don’t men “take the bullet”? Despite my noisy rejection of “the macho”, there I was, blaming my father for not being a real man. Years later, he told me that when I first moved in, he spent most of his time just worrying if I was going to be all right. Of course he did.

Nobody ever told me: you don’t have to waste years trying to figure out how to be a “man” because the whole concept is horseshit. We are people, individuals comprising a variety of sexes, races, shifting sexualities and all the rest of it. Every convention that tries to reinforce this difference is a step back. Notions of gender pointlessly separate men from women, but also mothers from daughters and fathers from sons. The whole thing is – at best – just a stupefying waste of everyone’s time. And the thing that we naturally forget about time is that we only get so much. That’s why, if I could talk to my 18-year-old self right now, I’d say something like this:

Mate, I know you lost a beloved parent last year. So did I. And the whole village came to his funeral; St Peter’s was packed and there were people standing outside, just like at Mum’s. I wrote the eulogy and spoke for 15 minutes about everything I loved and admired about him and it was easy.

But don’t forget the real thing is standing in the kitchen, peeling spuds and wondering if you’re all right. Hey, young man, go and ask him about his day. 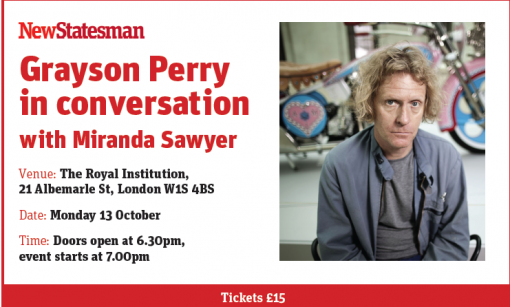