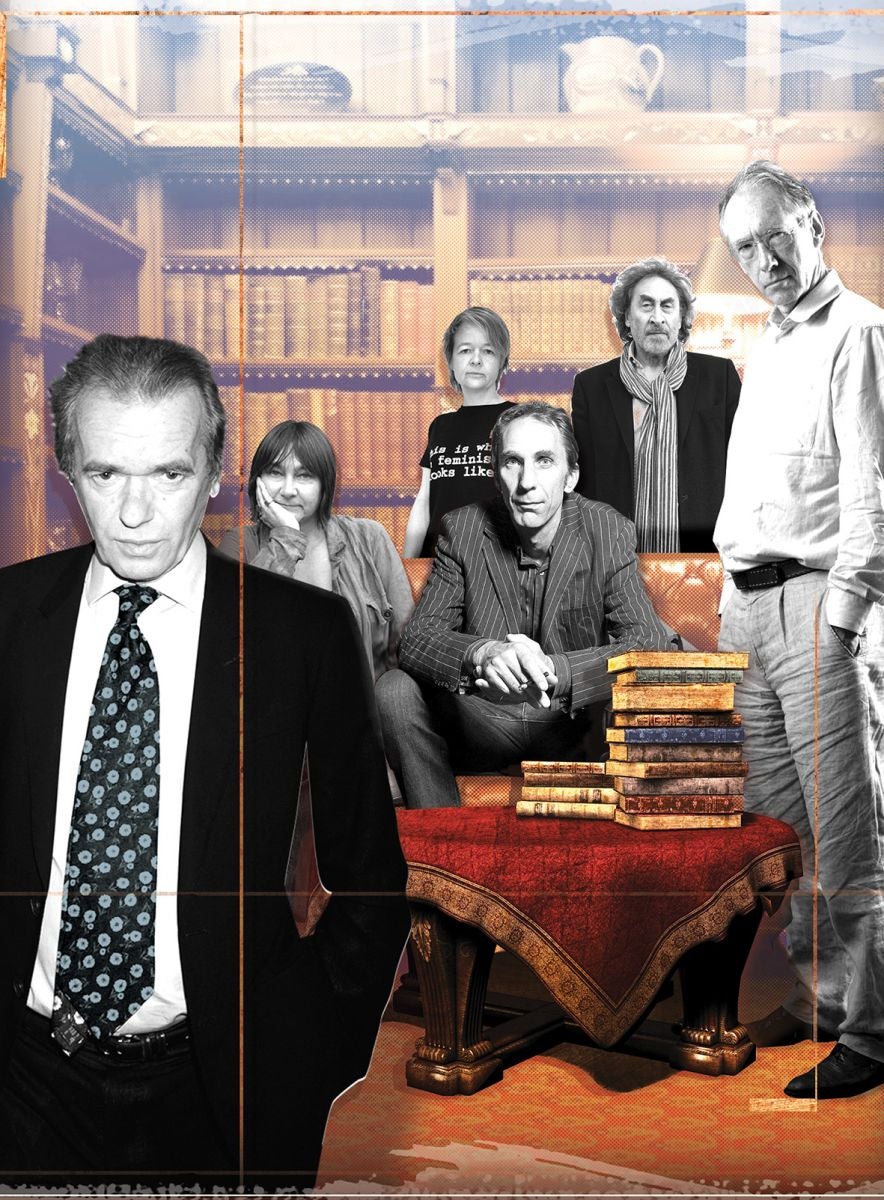 This week’s New Statesman kicks off a seminal publishing season with reviews of new novels by two British literary heavyweights, Martin Amis and Ian McEwan. Our own critical prizefighter Leo Robson argues that scientists and historians have captured the brains of these two writers, now in their mid-60s, bringing them to the point where facts overpower their fiction. You can read Leo’s review online now, as a taster of our Autumn Fiction Special, which also includes:

Lionel Shriver on The Paying Guests by Sarah Waters

Olivia Laing on The Bone Clocks by David Mitchell

And finally, although he enjoys reading Shark, the latest novel by Will Self, the NS’s critic at large Mark Lawson recommends it only to unemployed readers who have both “insomnia and a catheter”, because it is a “chapter-free, gap-less, italics-and-ellipsis-strewn chunk of 480 sides”:

Although driven by considerations of plotting and pace, the structure of a work of literature often also acknowledges the ease of the reader: the crime writer Peter James recommends short chapters so that people can read two or three before going to sleep. In that sense, the ideal reader of Shark might be someone who doesn’t have a job but does have insomnia and a catheter. Even the most diligent Self fan, when confronted with such density of typography and exposition, must sometimes think: give us a break. But, in an era when publishers and reading groups exert so much pressure towards the soft read, Self (along with Philip Hensher and both Smiths [Ali and Zadie]) is saving the life of the hard read that rewards the attention demanded.

This week’s New Statesman, “The New Caliphate” is available in shops NOW. To purchase a copy, visit www.newstatesman.com/subscribe or visit the App Store.

And if that wasn’t enough to chew on, Philip Maughan has written a preview of the next clutch of new big-name novels, due out later this year:

The year’s most beautiful season is also the busiest for those in the book business. Canadian dynamo Margaret Atwood kicks off the second wave of notable titles this autumn with a new collection of dark fables, Stone Mattress, on 28 August (look out for an interview soon in the NS). Competing with her for the prize of hottest story collection of 2014 is Hilary Mantel (the deliciously titled Assassination of Margaret Thatcher lands on 25 September), Kirsty Gunn, whose Infidelities will be published on 6 November along with another Canadian, Eliza Robertson, who publishes her hotly-tipped debut Wallflowers on 16 September.

Virago will release the new novel by Marilynne Robinson on 9 October, the third instalment in the Gilead series, Lila, which tells the story of a rogue child coming to terms with her new life as a minister’s wife. Irish writer Colm Tóibín begins what might turn out to be a Robinson-style character survey in Nora Webster, when Nora, the sister who stayed behind in his 2009 novel Brooklyn, attempts to rebuild herself after a shattering bereavement.

On a break from producing the film script for Tóibín’s Brooklyn (which stars Saoirse Ronan and Domhnall Gleeson, and will be released in 2015), Nick Hornby returns on 6 November with Funny Girl, the story of a Blackpool beauty queen, Sophie Straw, beginning to doubt whether she is cut out for the showbiz world. After the unearthly cool of Jonathan Glazer’s film adaptation of Michel Faber’s 2000 novel Under the Skin, Faber returns with The Book of Strange New Things, also on an extraterrestrial theme. Peter Leigh, an evangelical Christian, is a missionary expedition to the planet of Oasis, where he must translate the Gospels into a language comprehendible to the alarmingly enthusiastic natives.

The beginning of November sees the return of Frank Bascombe, Richard Ford’s most endearing alter-ego, surveying the damage done to his New Jersey home by Hurricane Sandy in Let Me Be Frank with You. Finally, on the slippery slope to Christmas, trains and planes worldwide to fill up with copies of Us, the new novel from One Day author David Nicholls, published in hardback on 30 September.