Former members of great cultural juggernauts are doomed to spend their later lives on the interview circuit being asked if they have definitely ruled out a reunion. Despite the death of Graham Chapman in 1989, Monty Python still has sufficient members and friendship for a run of ten nights at the O2 in London and they’ll be fine as long as their various post-surgical scars can withstand the effort. The arena is most often booked by musical super-brands, so it is the perfect choice for this event, as Palin, Cleese, Jones, Idle and Gilliam are comedians with a rock band’s following and a rock band’s problem: the greatest hits or the new material?

There are a few fresh routines here – including a lightly anti-tabloid satire with Palin as the host of a TV game show called Blackmail, in which contestants pay to maintain their privacy – but the running order mainly consists of the No 1 hits, including in the second half a medley of “Spam”, “dead parrot” and “cheese shop”.

Other beloved material that is either logistically or medically impossible onstage – the football match between well-known philosophers, the fish-slapping dance – is taken from the DVD box sets and played on giant screens – though Cleese, who has expressed orthopaedic and artistic objections to doing “the ministry of funny walks” again, has managed to veto that routine, except in a brief quotation of stiff, high-kicking limbs from the Arlene Phillips dance troupe, who intermittently give the boys time to change costumes and catch their breath.

While it’s generous and sensible to give the fans what they want, the familiarity of the material starts to feel weird. Just as Rik Mayall, a comedian who made his name by projecting a tangible sense of danger, came to be given in his obituaries the sanitising tag of “national treasure”, so the Pythons, whose early work was famed for its strangeness, have become performers who warmly fulfil expectations. The most graphic illustration of this process is that their “Nobody expects the Spanish Inquisition” gag is so well loved that this Inquisition was not only expected but demanded by the audience who, recognising the couple of lines of dialogue before the pope’s interrogators burst into a suburban living room, roared its relief in the manner of rock audiences hearing familiar opening notes. 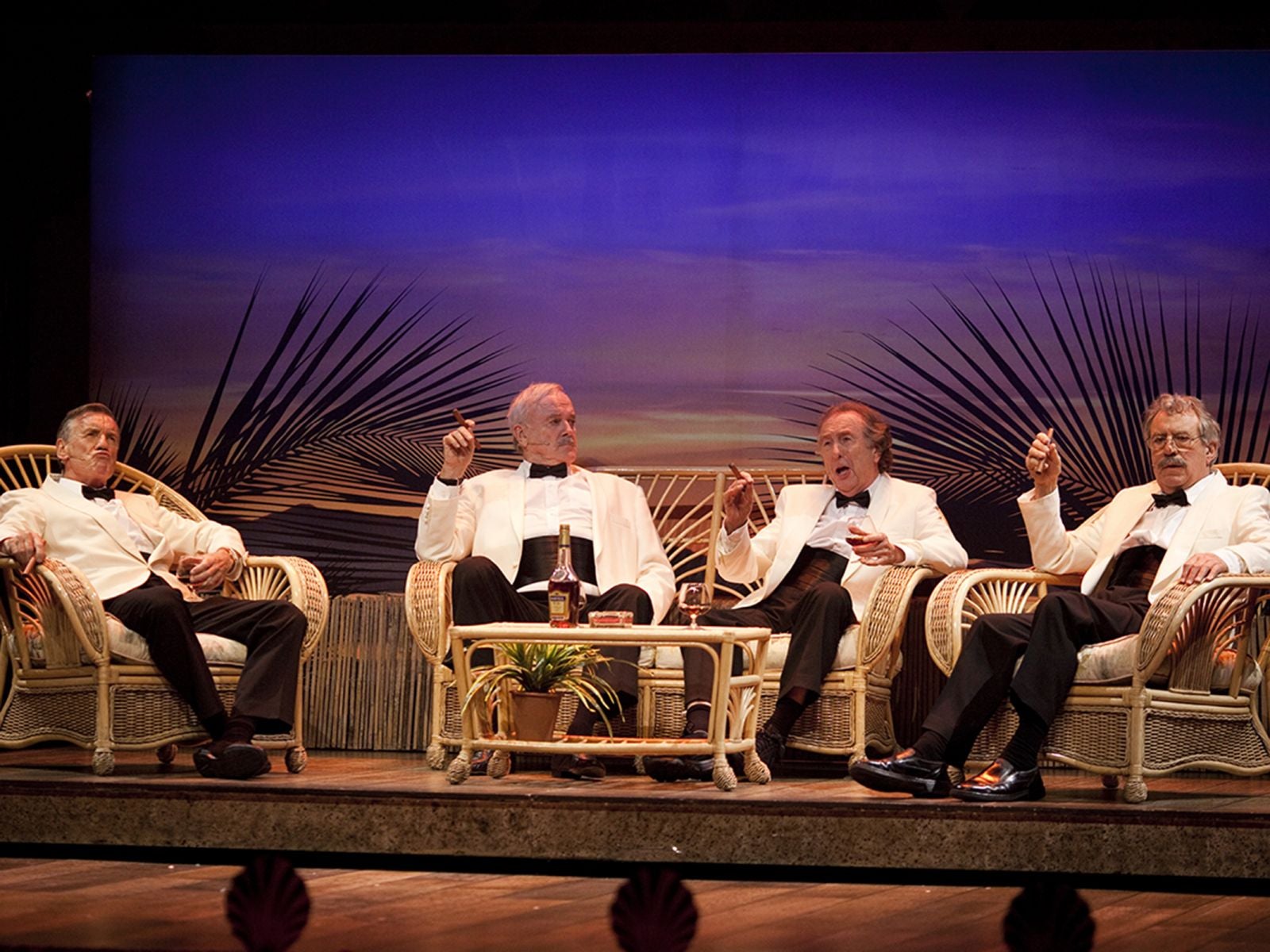 League of gentlemen: the Pythons at the O2

While the Pythons were never politically radical, they did upset the TV establishment with their surrealism and bum jokes, so it’s odd too to feel such warmth pouring into the great bowl of the O2. The early sight of the face of the late Graham Chapman on one of the screens induces the sort of ecstatic applause that would be matched among the English dead perhaps only by Diana, Princess of Wales.

Terry Gilliam tries to inject some disrespect by having Chapman’s head kicked into space by the celebrated Python foot, while in one of the musical routines, a couple of cock cannons fire sperm into the sky – but the fans didn’t want naughty boys. They had come to worship messiahs. When Cleese forgot his lines in the cheese shop scene – and Palin, with characteristic niceness, leaned across to help – there was more or less an “Aaaah!” from the auditorium.

And yet there is something undeniably touching about seeing them all, at the end of the night, side by side as septuagenarians in white tuxedos and black cummerbunds that, in some cases, are under considerable strain – though, at 71, Palin remains so trim and lithe that he sometimes resembles a kindly youth escorting his grandads and their civil partners on a night out.

Even so, there’s a double edge to the evening, in which gags about what a rip-off the whole thing is – a jokey merch-o-meter on a screen clocks up the sales of memorabilia – coexist with stalls asking, in all seriousness, for £20 for a thin, paperback programme. And celebrity guest cameos in person or on screen – Stephen Fry, Stephen Hawking – add to the sense of a memorial service that five of the six subjects have been able to attend. The surreal has become the so sweet. Everyone is hoping for the Spanish Inquisition. Blessed are the cheese joke makers!

Harold Pinter introduced to British theatre a particular sort of silence and the dramatist Richard Bean is pioneering another noiselessness, in which the audience, rather than the performers, is given pause.

The “Bean silence” descends whenever the playwright makes a joke about some liberal shibboleth. There was a tangible chill in the stalls during much of his play about immigration, England People Very Nice, and also during his comedy about climate-change science, The Heretic.

It happens several times during Great Britain, his new work about tabloid bad behaviour, which opened suddenly at the National Theatre this month after secret rehearsals during the phone-hacking trial. A media-heavy crowd loved the gags against the Mail and the Sun but went solemn at jokes about disability or race. Pinter became a darling of the theatre. You suspect that Bean, unusual among dramatists in not bothering about whom he upsets, never will.